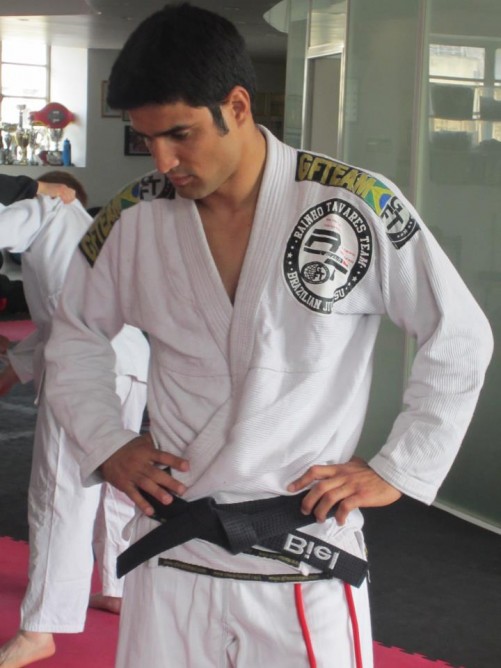 GFTeam UK’s Gabriel Rainho sat down with BJJ Eastern and went over his Jiu-Jitsu story since childhood, training under GFTeam in Rio, opening new academies in Europe and future plans:

1. Hi Gabriel, can you please introduce yourself to the BJJ Community of Eastern Europe? 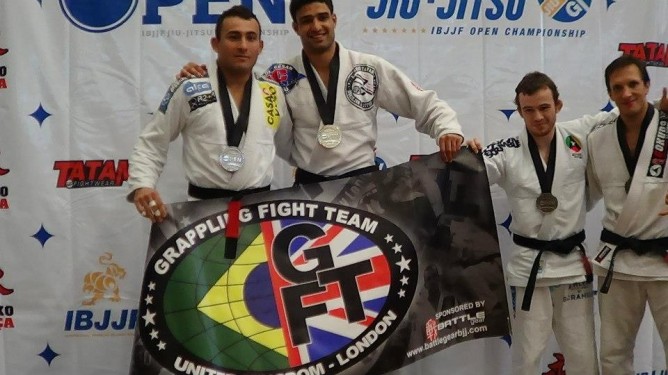 2. Please tell us about your Jiu-Jitsu story and about GFTeam’s history and development. 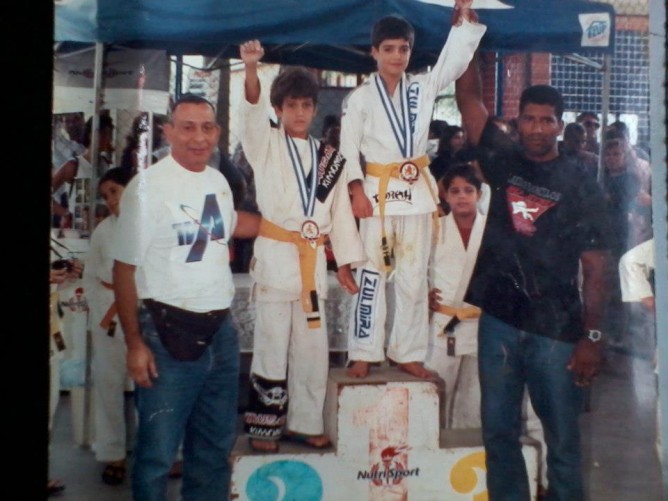 Gabriel in his early days

I first started training Jiu-Jitsu when I was 6 years old under Master Laerte Barcelos in Rio, together with my cousins Joao Alfredo, Felipe Tavares and the very well known Vinicius Marinho. Later on we all moved to GFTeam, back then still known as Gama Filho University Team, under Master Julio Cesar. I was a blue belt at the time. And it was thanks to Jiu-Jitsu that I had many opportunities, for example I studied at a private school and private university, representing the sport in competitions. I built good friendships, I got to know many different places, and Jiu-Jitsu has always played a big part in developing me as a human, my personality, my character etc.
The GFTeam history began at the Universidade Gama Filho, a University in Rio de Janeiro famous for its Physical Education course and its sporting teams. In 1996, the academy was up and running at the Taquara Campus in the Northern area of Rio de Janeiro. Pedro Gama Filho and Paulo Jardim coached at the University for a short time before handing the job over to the capable hands of Master Júlio César, Marcus Bello and Alexandre Baraúna. Gama Filho and Jardim stayed behind the team giving financial support. In 2007 however, due to some of their competitors having transitioned to Mixed Martial Arts (MMA), UGF had to change their name since the University did not want to be in any way connected with the sport of MMA, thus giving birth to the name Grappling Fight Team (GF Team).
When the team lost the sponsorship from the University, we had to move the Head Quarters from the famous Campus Piedade to Bairro do Méier.

Initially, I wasn’t planning to setup GFTeam in the UK. I first came to London to be with my girlfriend, who is my wife now. I looked for places to teach Jiu-Jitsu in London, and also got invited to host seminars around Europe. Through the contacts I made, I got the opportunity to teach regular classes in London, and now we have a solid group achieving a good success in competitions. After only one and a half years, we promoted our first White Belt to a Blue Belt, Benny Sotho, and another one of my students, Stefanos Siouzos just won the Abu Dhabi Trial here in London and he’s going to the World Pro this year. We also organized two big training camps last year, one with our Leader Master Julio Cesar and Theodoro Canal, and the other one with Jake Mackenzie and Vinicius Marinho. This year, we are planning to organize more seminars and training camps with big GFTeam names, such as Rodolfo Vieira, Ricardo Evangelista, Igor Silva, among others. So, I guess things are going very well for us! 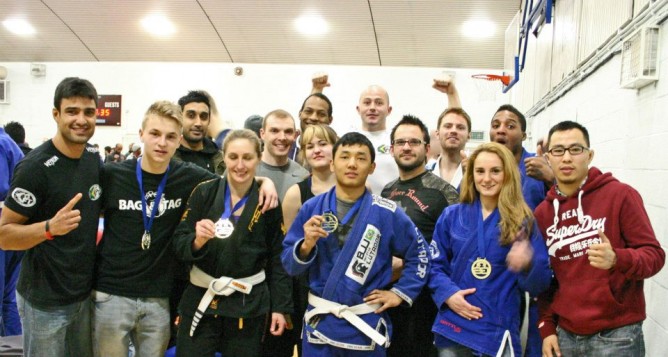 4. How is GF Team spreading across the globe and do you see it one day being as international as Gracie Barra or Alliance?

We now have a few affiliates in the Southeast and Northeast of Brazil, as well as in California, Texas, Ohio, Boston and Connecticut in the US, and further affiliates in Chile and Australia. Most recently, we also expanded to Europe and I’m grateful to have the honour and the privilege to represent the team here. Beside London, we now also have affiliates in Germany, France and Turkey.
The big teams like Alliance, Gracie Barra or Check Mat are very established, and I think GFTeam is going the same direction. Our group is strong with a wealth of talented athletes and highly skilled instructors, who believe in our philosophy. And the support we give each other is what makes the team even stronger, in my opinion.

5. Your wife is half Croatian, do you plan to do plan to do something BJJ related in Croatia?

Yes, I have been to the South of Croatia, in Dubrovnik, for holidays and I loved it. It’s a beautiful place with very nice people. I would love to come back again and it would be a pleasure to spread my Jiu-Jitsu knowledge in Croatia as well as in other parts of Eastern Europe, if I get the chance.

6. How would you describe your BJJ game and your teaching style?

Due to my Judo background, I like throws a lot. As we have the privilege at GFTeam to train with such good partners with a variety of characteristics, we have to work on all positions in our Jiu-Jitsu game, no matter if you are on top or playing on the back. I like the knee slicer guard passes and the jump guard passes, which became very famous with Rodolfo. And since he started to put this style on his game, we all kind of copy and learn from him, and I think it has now become a GFTeam style. As a teacher, I like to focus on the details, which in my opinion make all the difference in a competition. I try to explain the reasons behind and the advantages of the technique; why, what and how you should make certain movements and what you should avoid. 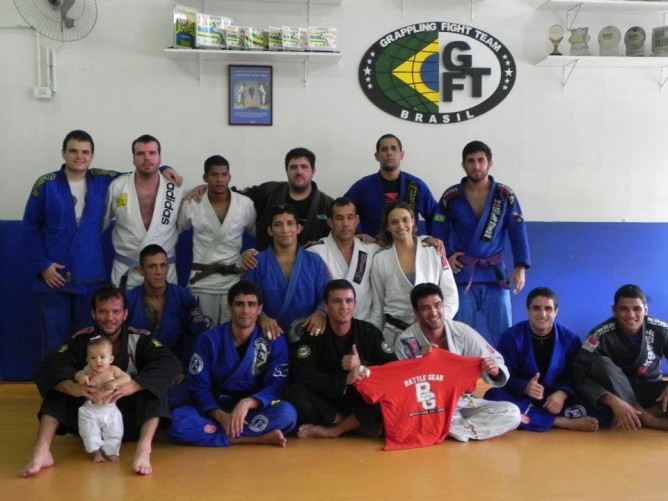 7. What can you tell us about Master Julio Cesar as a a teacher and leader?

Our master and leader Julio Cesar represents a lot for us, not only as a teacher but he is also an amazing person, very kind, helpful, humble and he teaches how you should be as a person, not just a fighter. As he likes to say: “To reach the top level in Brazilian Jiu-Jitsu, it’s necessary to have absolute dedication. To remain at the top, it’s necessary to work even harder, you must be passionate about the art”. When he teaches, he doesn’t see what belt you are, how many titles you have, he treats everyone the same way.

I’d like to thank my wife who always supports and helps me in everything, including Jiu-Jitsu. Also my family, especially my parents who introduced Jiu-Jitsu to my life, and my cousins who support me a lot. There’s also my sponsor Battle Gear, all my students who give me the credibility and who believe in our job. I’d like to thank the Masters I had in my Judo and Jiu-Jitsu journey for all the teaching, my Master Julio for the trust, and all my GFTeam friends. And finally, thanks to BJJ Eastern Europe for this opportunity. It was my pleasure. See you soon!

9. Thanks Gabriel and all the best!