Germany’s top BJJ player, Johannes Wieth: “I only go for gold, there is no 2nd place for me” 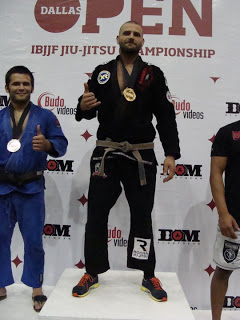 1. Hi Johannes, can you please introduce yourself to the Eastern Europe BJJ community?

2. Please guide us through your bjj journey from when you started training in 2004, to training under the Ribeiro brothers, with Rafael Lovato JR and conquering many medals in the Europeans, and world Championships.

I started training BJJ in 2004 at the age of 28y. For the first 2 and a half years i only trained no-gi. I had a teacher who lived 500km away, he was a purple belt at that time. I visited him every 6-9 times for a day, then would go home and train with some friends. My “dojo” was my living room where i had 3x3m mats. I was very lucky that my roommates liked my hobby and my neighbors were patient (no takedowns and throws!). In 2006 my friend and training partner oliver and I decided to step it up. We thought that we should get world class instruction in order to develop good BJJ skills. Compared to many people who have trained since a young age, we felt we had started late and didn’t want to waste any time. We got in touch with Saulo Ribeiro and he sent Xande for a month to stay in Munich. When he saw that none of us had a gi he told us that we weren’t training BJJ. We didn’t agree at first, but after a week everybody had a gi, mostly karate gis… This point, is when i consider the start of my BJJ training. Since then, i travel 2-3 times a year for a total of about 9-12weeks, to the USA to train with Xande, Saulo and Rafael Lovato. Since 2010 I have spent most of my time in the U.S training with Rafael Lovato in Oklahoma City. We have a very similar body types and the same masters. This helps me a lot to understand his teachings and pick up things quickly. Since then we have also become great friends. I am a very competitive person and I am very happy that i found the right people to learn from. Competing together with my masters at the biggest tournaments empowered me right from the beginning. At tournaments I only go for gold, there is no 2nd place for me. If i don’t win, for me it was just a training exercise, i don’t consider it an accomplishment if i don’t win. With this mindset i always win. For me its all about training and improving myself, in life and BJJ. In both worlds you can find people who support you and people who need your help. If you try to do it all by yourself you are going to fail very quickly. With this mindset it became easy to accomplish my goals. All i had to do is work every day as hard as i possibly can. Of course i could improve my BJJ faster if i would quit my job, stop running my academy and move to the u.s. to train with my teachers on a daily basis. But i never thought about doing that, i love my life exactly the way it is. It is also a big driving force for me to prove that you can reach your goals even when the road is full of obstacles. Two weeks before I won the worlds as a blue belt, i popped my ribs. Instead of using that as an excuse, i turned it around and thought about it as a challenge. I proved to myself that problems are there to be solved and my solution is to see them as a challenge but in a play full way, like a game you play with your friends. If you win you can smile, if you lose its not the end of the world and most of the time you can still smile. I had moments where i broke down mentally on the mat because i accepted the excuses my mind had come up with every time something became hard. But knowing that I gave in felt even worse afterwards. I learned to no longer accept those excuses. The result is that sometimes when i lose a fight on the mat, i’m still very happy with my performance because i gave all i had that very moment. I still don’t like loosing but losing against an opponent is only half as bad as loosing against yourself.

3. How is the BJJ scene in Germany and how do you see it evolving?

It’s growing constantly. Every year there are more and more tournaments with growing numbers of competitors. Its still a small scene though. I think the big problem is that too few people have the right attitude and dedication to really help Germany to make it to the next level. Of course the majority of practitioners are doing BJJ just as a hobby with no big ambitions to become outstanding competitors and thats absolutely fine with me. BJJ has so much to give as a lifestyle, competition is just one little aspect. To better your life through BJJ, in my opinion, you don’t even have to compete. But when we talk about competition BJJ, i think too many people in Germany who claim to take it seriously, don’t have the same dedication as many people in Scandinavia, Brazil or the USA. There are also some talented people who don’t know exactly how to train, they compete too much and neglect other important parts of practice because nobody shows them how to do things properly. But there are also some guys you will hear from in the near future for sure.

4. Please tell us more about your school in Munich Sanefighting and your team.

I started teaching when i started training. That means i made a lot of mistakes, and of course still do. But i can see that since i refined my teaching, my team makes way faster progress than some years ago. I would say that i am now at the point where i really can built up good competitors. The team is big enough and the spirit within it is very good. Combined with the right knowledge and experience its just a matter of time till we have more team members competing successfully at major tournaments.
5. A Serbian BJJ/MMA fighter, Aleksandar Rajacic (Zerjal Team) was training with you in Munich. How was training with him?

We had him over recently and it was very good for our team to have the chance to train with him. It also helped me a lot since i always have a hard time fighting against smaller opponents from lower weight classes. The reason is that i don’t have training partners like him. Training with him helped me to compete in the open weight division. It was also fun to have someone tough like him to train conditioning with, it motivated me a lot. He is also a nice person, but don’t tell him that i said that.

Right now i’m in Oklahoma City to train and prepare with Rafael Lovato jr. for the worlds. After the worlds i will try to move my academy to a new spot in munich. Im thinking about competing at the no-gi worlds since i haven’t done much no-gi recently. This would motivate me to take off my gi more often.

7. How would you describe your BJJ game/ style?

That’s very hard to say. Maybe i’m a top game guy who likes to play guard. 😉 i don’t really have a favorite position but i feel very comfortable when i back mount someone… I would say i fight very tactically. Im very patient when I am in good position and wait for my opponent to make the first mistake. I try to pressure my opponent through position more than through fast movement, but i like fast transitions too.


Johannes thanks for answering these questions and best of luck in 2012!