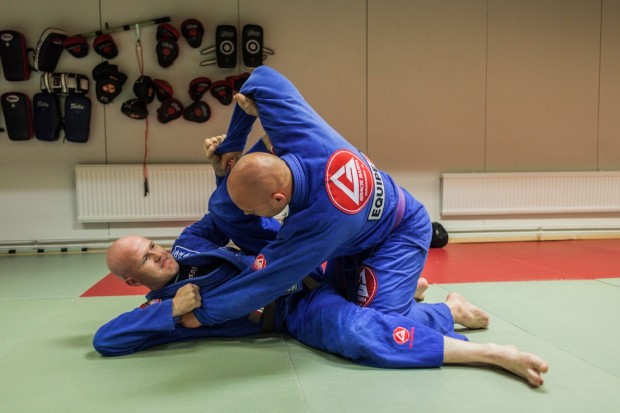 Finland is one of the top BJJ countries in Europe. The first ever Finnish black belt was Marku Juntunnen in 2004. Jukka Lemola recently became Gracie Barra’s very first Black Belt in Finland. Trained under the guidance of Carlos Lemos Jr. Here is what he had to say about his plans with Gracie Barra in Finland:

“The very first Gracie Barra black belt of Finland. This is history in the making. Tell us how you feel.

Prof. Jukka: Yes, Carlos Lemos Jr. promoted me to the black belt yesterday. That made me the first Gracie Barra black belt in Finland. The feeling is incredible… this was something I didn’t see coming… not when I first got in touch with Gracie Barra Jiu-Jitsu and not even when I set up the first Gracie Barra school in Finland, back in 2005. I’m grateful for the opportunity to spread our great art of Jiu-Jitsu here in Finland. It’s been made possible for me with the help and support of our Master Carlos Gracie Jr, my “other” family Gracie Barra and of course all my great instructors, coaches and students. They are the reason that I take to the mats again and again.

Tell us about this love story with Gracie Barra.

Prof. Jukka: I got my first touch with the gracie jiu-jitsu and Gracie Barra back in 1999. At the time I didn’t realize that jiu-jitsu would be part of life ever since. I visited several European Gracie Barra schools, trying learn as much as possible of this great sport. I was given possibility to learn from several of the Gracie Barra’s professors in Europe. The feeling I got in each everyone of those schools was something I never felt before. The family like feeling, the respect among the instructors and students and the technical skills of the instructors made me feel like home. Gracie Barra became my “other” family.

When I got back in to my home country, Finland, I tried to find a school where I would sense the same feeling I found on all Gracie Barra schools, but without success. There where only a couple of jiu-jitsu schools in Finland, none them was Gracie Barra school. I just had to do something to that. Year 2004 I took the first steps to start the first Gracie Barra school in Finland. I contacted Professor Lemos, because I knew that he had already been helping the Gracie Barra in Sweden. I told him about my plans to bring Gracie Barra to Finland. I was a blue belt at the time, and I could have never done that without the help of our professor Carlos Lemos Jr. That’s how the story began and the rest is history. The best knowledge, the understanding of the art of jiu-jitsu I have got from my professor, Carlos Lemos Jr.

GracieBarra.com: Tell us about your style of teaching, or approach to the entire Jiu-Jitsu schema?

Prof. Jukka: My personal style is based on the same ideas that I teach to my students. I always like to emphasize the importance of the basic techniques. That way you can build your own style and adapt the new techniques to the solid base. I really enjoy playing an active guard and sweep game, not forgetting the submissions. ;)”