Fritz Rodriguez On Pioneering BJJ In The Philippines,Training In Brazil & Running His Academy In California 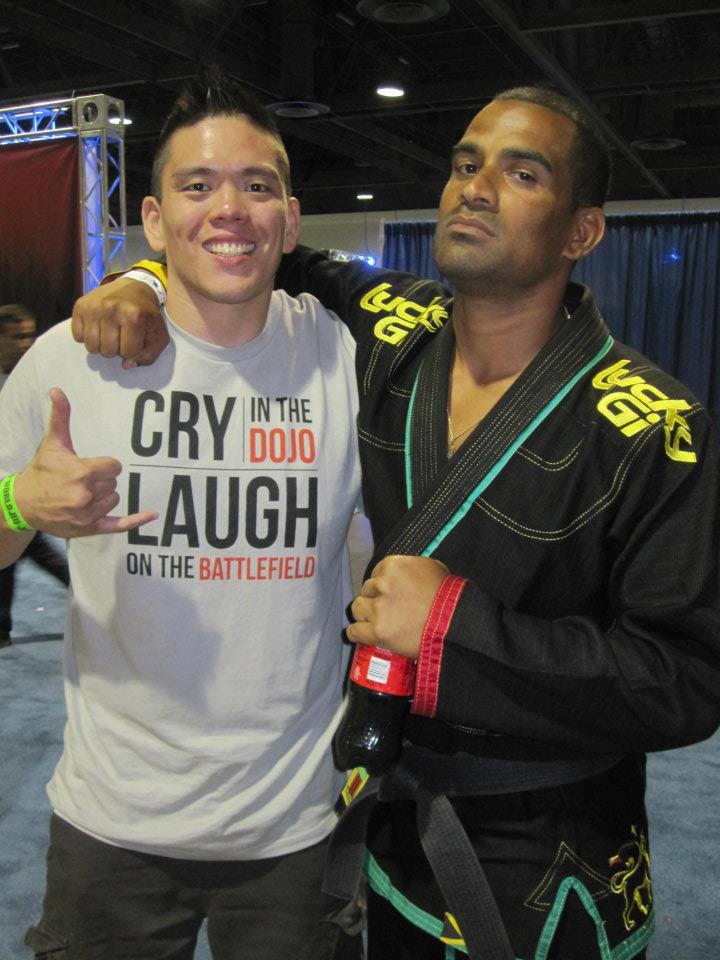 1. Hi Fritz, can you please introduce yourself to the BJJ Community of Eastern Europe?

Hi BJJ Eastern Europe! Its such an honor for me to be on your site. My name is Fritz Rodriguez, 35 years old BJJ Black Belt from Manila, Philippines. Eastern Europe is dear to me because my grandfather was from Germany. When I’m in the Philippines, I train with Deftac/ Ribeiro BJJ. A club headed by BJJ black Belt Alvin Aguilar. When I’m in the US, I train at Gracie Barra Northridge under Prof. Romulo Barral. I am 3-1 in professional M.M.A., former U.R.C.C. ( The Philippines’ biggest M.M.A. promotion) light heavyweight champion. I also got a silver medal in the 2009 American Nationals absolute masters brown belt.

Fritz with Kazeka Muniz in 2000 in Rio

I first learned about BJJ in 1995 when I was 16. I visited my Uncle in New York one summer and he introduced me to the UFC. At that time Royce Gracie was dominating the scene. Like most of us old school guys, thats what drew me into the sport. The next summer, I was at Torrance, California visiting another Uncle. We ate at an all-you-can eat japanese buffet. I had too much to eat that I had to throw up in the parking lot. I was leaning against a sign and when I looked up. I read the sign. It said, parking for Gracie Jiu-Jitsu Academy.In 1997, I came back and learned that Royce Gracie was an instructor there. I took a class and got hooked instantly.

Fritz getting his blue belt from Carlinho Gracie

I met Kazeka Muniz when he taught a seminar in the Philippines. He was the one who introduced me to another style of Jiu-Jitsu: Sport Jiu-Jitsu. At that time he was a brown belt under Gracie Barra. In 2000, I went back to California and spent 3 months just training with Kazeka. He took me to Brazil and thats where I experienced first hand the Jiu-Jitsu lifestyle. Thats when I knew that this is what I wanted to do for life. I got my blue belt that same time and got my feet wet when I did my very first BJJ tournament. The 2000 Mundials!

15 years ago, there was only one person who did BJJ in the Philippines. Alvin Aguilar. If you wanted to do Jiu-Jitsu, he was the person to go to. We started of with a handful of guys rolling in his patio. We would buy videos from a local martial arts store and learn from those. A couple years later, other groups came in. At first the rivalry was very heated. It was almost gang like. When guys from a different academies run into each other in a bar, guaranteed a brawl would happen. Later, we all realized that this kind of rivalry was not helpful for the growth and development of the sport so we channeled or rivalry in a more productive way. Through tournaments. After seeing the same group of people every tournament, we all started developing camaraderie and friendship with the other teams. We realized that instead of beating each other up. why not help each other grow through competition on the mats. Its been great ever since and the community has quadrupled since.

5. How is the training and mindset in the US compared to the Philippines?

The difference between the US and the Philippines is that more people in America want to make a career out of BJJ and MMA. There are tournaments and events every week and there are sponsors scouting these events looking for the next big thing. I think California is the BJJ mecca of the world right now since all the top guys from Brazil moved there and set up shop. In the Philippines, people do it mainly as a hobby. Guys come to the gym to relieve the stress of the daily grind and some come to kill time and let the traffic die out before going home. The scene in the US is more competitive compared to the Philippines. Although there is alot of talent guys here in the Philippines, just not that much exposure. But in a few years, I see the Philippines being a force to reckon with in the International BJJ community. right now, there are a few guys already making noise.

6. Please tell us about your academy in California. How does it differ from other BJJ academies?

A proud Fritz with some of his young students

My Academy in California is called SoCal Fight Factory. We are on our 2nd year of operation. Its located in the outskirts of Los Angeles called Palmdale. We started it with a bunch of guys who formerly trained under Kazeka. We had a lot of people who doubted and criticized us at first. There where other academies around our area run by more experienced practitioners who said that we would not last very long. That’s what gave us the drive and motivation to do better. We where constantly trying to prove ourselves. Now, I can say we are the best and most active gym in our area. We are active in the BJJ, Muay Thai and Boxing scene and in MMA. Our kids and adults go to big tournaments and medal. Our amateur MMA fighters are well known through out California and Las Vegas. We have an amateur female fighter who is ranked #1 in the world at 115 lbs and so much more up and comers.

I admire all BJJ guys who make an effort to go to the academy and put on that gi regularly. I look up to practitioners who have the passion for the sport. They can be white belts, I dont care. I look up to them and from them, I fuel my drive to do better. Of course I have my favorites, Nino Schembri is my favorite of all time! I also look up to my coaches Alvin Aguilar and Romulo Barral.

8. How is it training with a beast like Romulo Barral, Beneil Dariush, Kazeka Muniz etc.. on a regular basis?

Training at Gracie Barra Northridge is a privilege that I am so blessed to have and am so grateful for. There is so much talent in that place and they help each and everyone to be better. Romulo Barral is such a great captain and his fire is passed on to his students. Benny Dairush is one example. The place is so competitive that you have to do your best to hang with these sharks. Imagine being on the same mats with such accomplished competitors like Romulo, Benny, Bruno Antunes,Felipe Preguica, Edwin Najmi and so much more. Its such a solid place to train with a great bunch of guys and each individual no matter what level they are at or accomplishments they have has something to contribute to these top level competitors.

9. What did you think about the Metamoris Pro event? Do you like these rules as compared to IBJJF?

I really enjoyed the Metamoris Pro event. I think its a different approach to the rules we are so used to. But it has its pros and cons. They should award points to someone who achieves a dominant position so the matches dont end in draws. They say there is alot of stalling and inactivity in the IBJJF events. But there was alot in Metamoris as well. Some competitors got dominated but just hung on to get the draw. One things for sure, I noticed that Sport BJJ has drifted far away from what is “real fighting”. I dont think the IBJJF should adapt these rules but it was good to see for a change and I think the top level competitors should participate in both IBJJF style and Metamoris style rules to diversify their Jiu-Jitsu game.

10. How would describe your style of Jiu-Jitsu? How about your teaching style?

Id like to think that I have a calm Jiu-Jitsu game. I don’t know if its good or bad for me. I like flow rolling and I like using technique instead of strength. I am a big guy but I don’t like relying on my weight to smash and smother a guy. When I roll in the gym, I like to move a lot and try new things and work on my weaknesses. I don’t care if I get tapped because I tried something new.I always say that no one should keep track of how many times you tap someone out or how many times you get tapped in the gym. I try to pass this style to my students. I believe that the basics and fundamentals should be taught to beginners to build a better foundation and not impress them with fancy acrobatic techniques at first.

11. What advice would you give to someone that is averagely athletic, has a full time job, a family, and can’t train everyday, but still wants to constantly improve his jiu-jitsu at all times?

I hope to compete more in 2013 and to be one step closer to my dreams which is to be well known as a good professor in the BJJ and MMA community. Some of the amateur MMA fighters from are gym are going to go pro soon so I hope Im able to adapt and succeed in this.It is my dream to walk behind someone as a cornerman in the UFC. I pray to God to give me more years so I can live to see these dreams fulfilled and for him to bless me in my chosen career.

13. Thanks Fritz and all the best!

Thank you BJJEE for the opportunity to be in your page. Its a great honor for me. All the best! If you get the chance please visit and like my facebook page fritzrodriguezbjj. I update it regularly. Thanks again!