Ezekiel Zayas: ‘Spain Has a Top European Level in BJJ’ 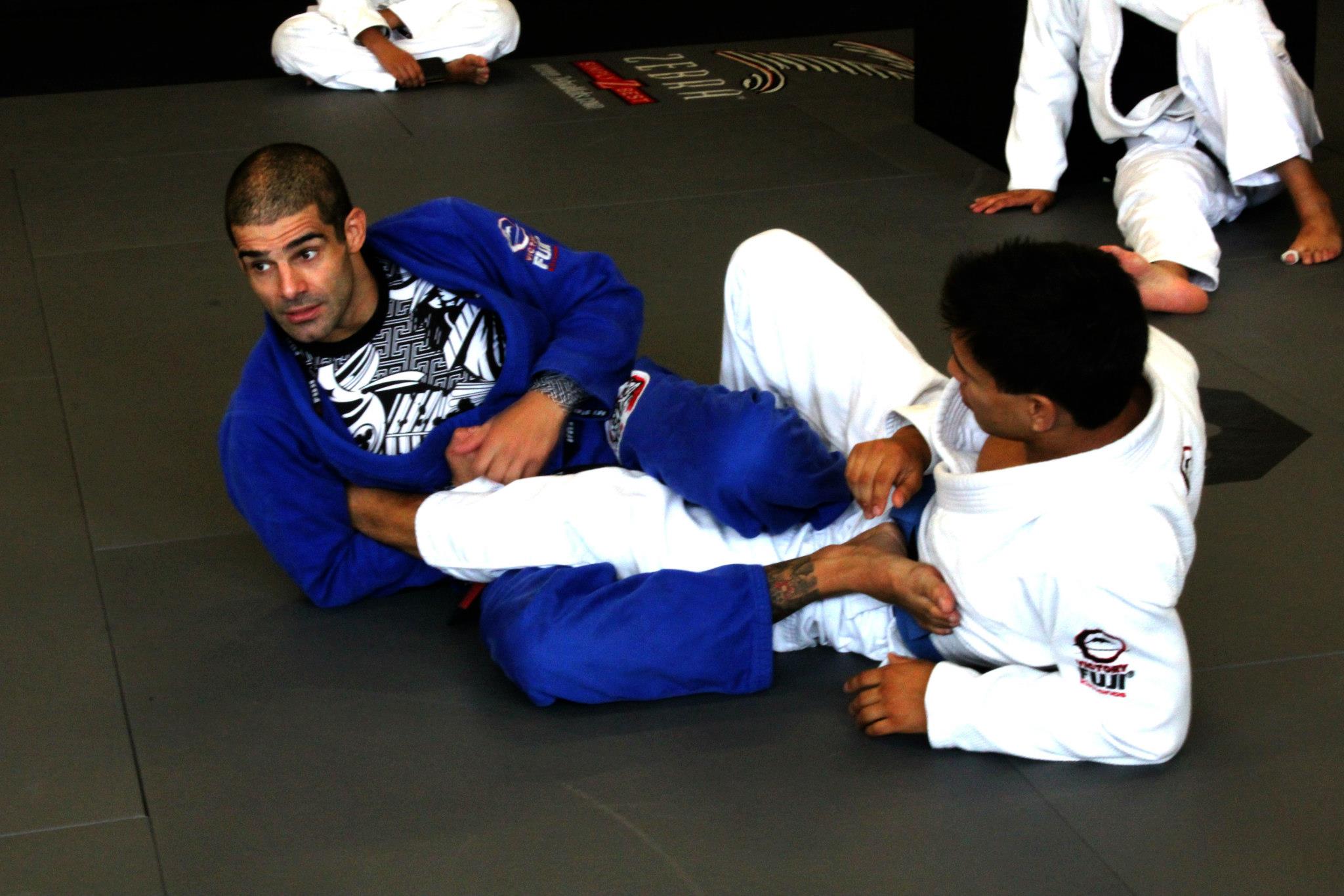 Ezekiel Zayas, from Spain is one of the top black belts in Europe. He runs his Ases Jiu-Jitsu Academy in the beautiful city of Valencia. BJJEE talked to him about his interesting BJJ journey that took him all the way to Japan, his view on the growth of BJJ in Spain, working as an IBJJF referee and much more:

1. Ezekiel, please tell us about your BJJ story and how you started training.

Well I started training judo when I was 4 years old, my father was an Aikido practitioner and he always wanted that I trained some martial art, I was training judo until 19 years old then I stopped because I didn’t fun and motivating anymore. Then I stopped training martial arts for a time, trained later some aikido but also wasn’t what I was looking for. Finally I saw a magazine talking about the first ADCC , and I saw that pictures with submissions etc and everybody was a BJJ fighter, and I started to be really interested about that “new ” martial arts , through a friend of mine I started in 2001 or 2002 (I really don’t remember) to train some grappling and MMA in an academy in my city, Valencia. Few months later a purple belt under Robin Gracie (who was living in Barcelona) called Tito Beltran started teaching BJJ at the academy so I started immediately training with the Gi, I was instantly falling in love with BJJ, that was just I was looking for like the perfect martial art, fun, effective, real….

In 2003 I traveled to Japan with a student visa and I kept training BJJ there. I liked it there and I got some jobs, and I stayed there for 3 years, training and working, there I was trained with Hiroshi Umemura a black belt under Nakai Yuki and also student of master Marcos Barbosa. I also trained with Mario Sergio Yokoyama (Ryan Gracie SP). It was really a good times for me, I learnt a lot there, my BJJ base was from there without a doubt. I made friends there and we still keep in touch. It was those good and hard times that changed me , there was the first time that I looked the possibility to dedicate my life to BJJ full time.

In 2006 I fought the Panams in adult purple feather division, was my first big tournament so far, I won 3 fights and lost the semifinals, so I was bronze medal! In that time I decided to come back to Spain and started my own academy here, I got my brown belt under Umemura.

In October 2006 I started my own academy in Valencia, I called ASES ( a word game with the Aces and Arte Suave Escuela) and here we are…

I got my black belt in 2010 under master Ricardo De La Riva while at a seminar in Canary Islands, I knew Ricardo and trained with him some times before in Spain and in Japan.

Nowadays I represent Brasa CTA in the big tournaments, I have really good relation with Felipe Costa and Comprido.

So I didn’t have ONE master my whole life but I feel lucky because I learned with many different professors and masters.

Even now I always try to learn and attend seminars with many different people and teams.

2. Please tell us about your academy in Valencia, Spain.

Like I told you before, Ases academy started in October 2006 when I came back from Japan.

Ases academy is a really humble place in a humble suburb of Valencia city. We have about 80 m2 of mat, some weights etc for make some condition training and a looker room. I started with 15 Bjj students and now we are about 65 adults and 20 kids, nowadays I live only from BJJ, my academy, teaching seminars and refereeing tournaments so I feel good because living only with BJJ was one of my goals in life. It’s true that it was not an easy way, was a really slowly growing and was only 3 years ago that I could live only from BJJ.

Ases academy is a really friendly academy, we receive every year many visitors from all around the world and that is fantastic for us. We love that, training with different people, different places, cultures etc.

Even I have like an academy motto: “We are all different, we are all together”

I think represent the Jiu-Jitsu culture.

In our academy, every year we are trying to organise seminars with some top fighters, that’s really necessary for upgrading our BJJ. Some names that came here: Terere, Finfou, Felipe Costa, Comprido, Yan Cabral… And for example last year, Isaac Doerderlein and Michael Liera Jr. I don’t care about academies, just about people and learning. 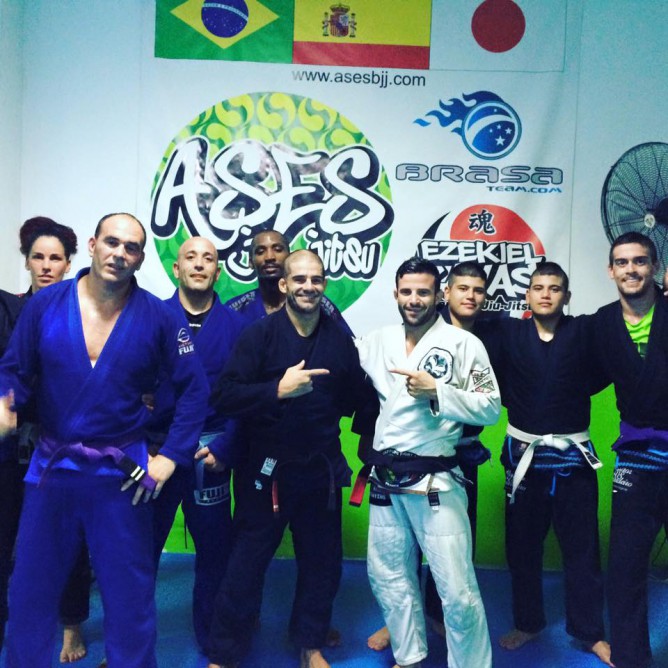 3. What do you think of the growth of BJJ in Spain?

I think I’m Spain the BJJ is growing strong, we have a top European level. Now is much more organised and in the last years the level go up very fast. And also you can see Kids classes in the main academies, so it is just time to some of that kids become a top fighter.

In my generation we got the black belt with over 30 years old, but now you can see black belts under 30 like our top fighter Alex Cabanes (probably the best Spanish fighter nowadays) and I hope the future will be really good for the BJJ in Spain.

4. How do you see BJJ developing in Spain in the next 10 years.

For sure we will have some black belts top fighters in the adult division.

Now we have champions in all categories, even black belt masters, but you know the true mirror is the black belt adult division.

In the last Europeans we had just 4 fighters in adult black belt (even some of them are over 30) and only Alex Cabanes was really successful, got 2nd after tough matches including Edwin Najmi in the semifinals and lost by points with Liera in the final. In 10 years for sure we will have much more adults doing well in the tops tournaments, and I hope some world champion

5. How would describe your style of Jiu-Jitsu? How about your teaching style?

Well I try to be as technical as I can. I like to move a lot, probably because I’m feather weight, I need to move o lot. I love open guard and attack all the time if is possible, may be I’m not the best for answer that question but I try to be technical and aggressive fighter. (aggressive means always looking for submission)

Like professor, well I try to be the teacher I would liked to have hehehe. I mean like I told you before, I didn’t have one master or teacher and that makes that I learned many things by myself, especially “how to compete, how to deal with nervous, How to have a right mindsets etc” that I learned because I fall many times and always get up again with some thin new in my head. So I try that my students have better way that I had and always give them tips about mindset, training etc.

When I teach, I try to show all the possibilities for the student, and I say that they can choose what is good for them. I don’t want that they fight like me, I want that they choose they own style, that they must think about that: how to create a BJJ game that fit with they body and personality.

Technically I try to be the most clear I can. I mean I try to show the position for the student that is not a talented guy. For me the level of a professor is not the one of his better fighter but the less talented in the class. We sometimes joke about that, because I have a really friend of mine that train, his nickname is Bichopalo (stick insect) so you can imagine what kind of flowing fighter he is, but he is a really hard worker, and he is now a really thought brown belt and I always say, I know that I can teach BJJ because you learnt BJJ, just kidding!! 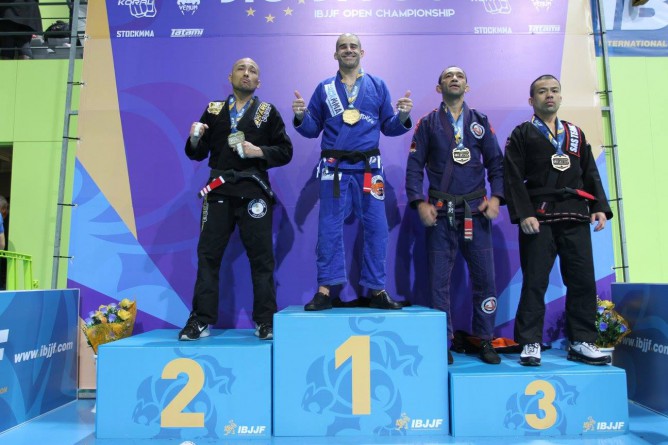 Ezekiel won his division at the 2016 Europeans

Well I just went to the Europeans (worked like referee and fight) and I have some seminars around to do (Italy, Spain and German) and also I will be referring some events in Europe (IBJJF, UAEJJ and NAGA) Probably I will fight again in Rome in April. And until the end of the year I hope to fight again too.

So that is my first part of the year. This year is the academy’s anniversary, 10 years! So of course I will give my best with my students, teaching and supporting them.

First thanks to Guillaume Huni and BJJ Eastern Europe for that interview, I really appreciate that opportunity to talk a little about my BJJ life.

Of course I want to thanks my family and all my students because without them I couldn’t achieved nothing in my life.

Also wanna thank to my sponsors, Stockmma and Daruma Originals for all the support and trust in me, and help me to reach many goals in my BJJ journey.

See you on the mat!