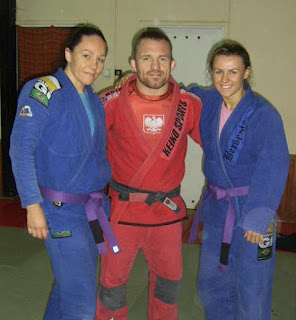 1. Hello Piotr, can you tell the Eastern European BJJ community about yourself and your journey in bjj?

My name is Piotr Baginski and I live In Szczecin – Poland. At present I work as a full time coach at my gym.
Sport was always an important part of my life. When I was young I trained volleyball, basketball, handball and judo. I graduated from a high school with a sport profile and during that time I was training canoeing. After I started collage (also with a sport faculty) due to the fact that I also needed to get a job I had very little for canoeing practice, so I started weight lifting instead to which I always had good predispositions. That is why I managed to win quite a few medals in polish and international tournaments in bench press.
I first started to get interested in BJJ about 11-12 years ago and therefore I started to practice. At first I regarded BJJ only as a good workout but with time the sport became a big part of my life. My friend Mariusz Linke was my first coach, he was the one thanks to whom I developed my passion for grappling sports. The next person to show me a different side to BJJ was an American named Roy Harris. My first Brazilian coach was Macaco. It was from him that I received my purple belt and subsequently during my first trip to Brazil – the birthplace of BJJ – I trained at his academy. Also during that trip I had my first MMA fight.
Unfortunately, due to several reasons, we took separate paths and for a few years now I train under Felipe Costa who is also the head teacher of my academy. It was from him that I received my black belt.
Among BJJ achievements that I am most proud of are several European Champion BJJ titles (both in my age and weight division), silver medal from CBJJE Word BJJ Championships, last year during FILA Grappling European Championships in Ukraine I won a gold medal in GI category, a gold medal from FILA Grappling World Championships in Serbia, a gold medal from FILA Master and Senior Grappling World Championships in Hungary, in 2011 I was also awarded best FILA COMPETITOR OF THE YEAR in GI CATEGORY.
Apart from the above I have numerous medals from Polish and German championships in BJJ.

2.You are the second Polish BJJ black belt. How do you explain that BJJ has grown so much in Poland compared to other countries in Eastern Europe? (with 43 bjj black belts, over 100 brown belts, making it by far the leader in Easter Europe and among the top bjj nations in Europe)

It turned out that I was lucky enough to became the second polish Black belt.
BJJ in Poland is developing constantly and very rapidly. At present we have many strong teams and very good instructors. It’s really hard to say why has BJJ in Poland developed better than in other countries. Perhaps it’s because the atmosphere created by polish Bjj community is drawing people towards our sport. It was always about having a good time training and competing and not about making money.

3. You always competed in MMA and BJJ at the same time. Which is more important for you MMA or BJJ?

BJJ is most important to me. I consider MMA as a way of testing myself and my abilities. However it’s important to remember that thanks to MMA people noticed BJJ and how effective it was.

4. How do you explain that in a country with such strong BJJ as Poland, there aren’t more Brazilian instructor living there and teaching?

The answer is very simple. It’s very hard to make a living solely from teaching BJJ. It’s far easier for Brazilian instructors to live and teach in Western European countries or Scandinavia because society is wealthier and therefore it’s easier to afford the classes. The economic situation in Poland is the following, the costs of living are on the same level as in Western Europe however, the wages are significantly Lower.

My motivation is not the same as it was a few years ago. In the past I tried to participate in every competition there was, both polish and international – off course everything depending on my financial situation.
Right now I am trying to focus on a few major tournaments. I would like to teach my students that it is possible to compete and win if they have the will and motivation to do so. I tell them that it is not only about winning when they are well prepared, the great achievement is to win when you are not 100% in shape.
6. Can you tell us about Berserkers Team and the large network of academies that you have built up over the years?Berserker’s Team was founded in 1999 by Mariusz Linke, Piotr Bagiński, Robert Siedziako and Maciej Linke. At first it was just an informal group of people who shared the same passion for BJJ, Judo and MMA. With time it turned out that there are a lot of people who are willing to train with us learn from us and that is how it all started. Afterwards people from cities neighboring Szczecin started to join, we were invited to visit them and conduct classes, that is how we founded first branches of our team. Some, who finished studies in Szczecin returned to their home towns and started new academies, others who went away to other cities and countries in search for better jobs did the same. They all kept training and still wanted to be a part of the team.
From the very beginning we hosted summer and Winter training camps to which anyone could come and train, they were open to everyone. It was also there, where people talked to us about joining the team. That is how one of the strongest teams in Poland was shaped. At this moment we are not interested in having a large amount of branches, instead we want to work towards achieving a status where Berserker’s Team is associated with high quality, professionalism and having fun training.7. Who are your best students and what have they achieved?
We have many talented BJJ, MMA and Grappling competitors. Counting all their achievements Gould be a difficult task. Among the best are: Grzegorz Kloc,Tomasz Stasiak,Michał Materla,Karol Bedorf,Maciej Różański,Tomasz Michałowski,Filip Markiewicz,Piotr Podstawczuk,Paweł Nędzi,Krystian Grzejszczak,Tomasz Arabasz,Maciej Jewtuszko,Michał Fijałka,Rafał Moks,Sandra Paszkiewicz,Irena Preiss,Karolina Zawodnik,Piotr Rutkowski,Maciej Glabus and many more.
I thing our greatest success is wining BJJ Team National Champion 7 times (we lost the title only once) along with wining ADCC Team National Champion 6 times (again we lost the title only once)!!!

8. In some countries, The BJJ scene has strong rivalries which can sometimes be very hostile. Is this the case in Poland?

Personally I think that BJJ is a beautiful sport and people who devote their time to practice should support each other. Why should we be hostile to each other if we share the same interests? Off course being competitive in order to win is OK., however we should be joined by a shared passion.
In Poland we have some minor hostilities between clubs however, I try to teach my students to be only positive about other teams. If there are coaches who say Bad things about other gyms and teach their student the same I can only feel sorry for them. We should be having a good time training together. Being loyal to the teams colors is important, however if someone wishes to leave and continue in a different gym I can only be happy that he is still training BJJ even though he is I a different team.
My club is open to everyone, we shall continue organizing camps and sparring weekends together. 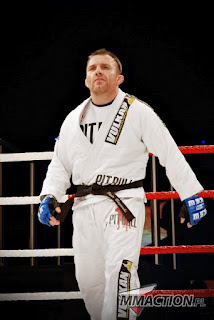 9. What are your personal and team goals in bjj for 2012?My personal goals for 2012 are to defend the BJJ European Champion title in Lisbon (I already manager to achieved that), to defend the Grappling World and European Champion title and if I manage to find sponsors I would like to compete in the International Masters and Seniors in RIO.
Regarding the team we want to defend BJJ and ADCC National Champion and win at KSW 18,19 i 20 and MMA ATTACK 2

10.Thank you Piotr for taking time to answer our questions. All the best in 2012!
Thank you for the interview and I send my best regards to all BJJ and MMA fans.
Piotr “Bagi” Bagiński