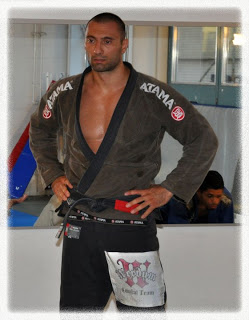 1.Bojan, please present yourself to our community, where are you from, how old are you, what do you do for a living?

First of all thanks for inviting me for an interview, and compliments for the iniciative for starting an website about regional bjj. I think it’s an excellent idea and fully supporting it. I think our sport needs it. So, let me answer your question now…
My name is Bojan Mirković, I’m 34 year old Croatian, and I’m head bjj instructor of Werdum Combat Team for Croatia and Swizerland, bjj black belt under Fabricio Werdum. My occupation is economy, I’m engaged in international trade, but the job I really love is bjj
Privatly I’m father of one child – a daughter and one more to come very, very soon, a son. My daughter is 2,5 years old and already started to train bjj. My wife does bjj as well, so it makes us one happy jiu-jitsu family.

2. Please tell us how you got started in bjj , your bjj journey and how you met Fabricio Werdum? 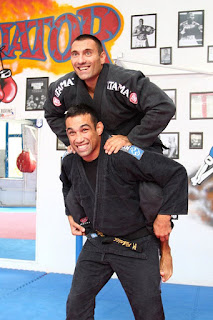 Well it’s a funny storry, It all started somewhere back in 2000. When my friend and I started to copy-paste some positions from some VHS tapes of Mario Sperry and Minotauro, but it wasn’t really a seroius training since there was no bjj academies around in that time. So it was going like that for some time and I started travelling and seeking for knowledge all around at seminars and camps, and started to train with BTT in Spain, and finally I think it was 2004. I met Fabricio Werdum here in Croatia while he was giving bjj classes for Mirko Filipovic. We started training, communicating in God knows what language, since I didn’t speak any portuguese and he didn’t speak any english, but bjj language is universal and we managed to become friends very soon. It was quite an effort for im to learn english, so I went to learn portuguese to be able to speak with him, which today , I speak fluently. Than I got to know his bjj master Mauricão Miguel Pereira R.I.P. who invited me to Brazil for the first time, and this man totally changed my life. All the bjj basics, way of life, discipline, respect and all that goes with that, I owe to him, and until I’m alive I will thank God for sending him to my life and being like a second father to me. Unfortunately he was murdered, and both me and Fabricio were without a coach and a friend in a second, and all that 2 weeks before Fabricio’s fight against Minotauro. The team was about to collapse when finally Fabricio managed to organize all and put us back together and start his own team, which we make part of until today. 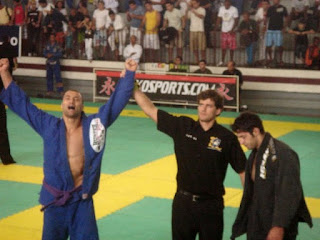 3. Tell us about your time training and competing in Brazil?
Today, without any exaggeration, I can say that Brazil is my second home, and I trully love this country and it’s people. When it all strated, all of a sudden I found myself living back and forth both in Brazil, Spain (where our other school is and Fabricio’s second home) and little less in Croatia, and like that for almost 6 years, training and competing. I’ve made some of the best friends in my life through bjj, I’ve learnt to speak 2 new languages, portuguese and spannish, and even won some titles. BJJ is the best friend you can make, man. I reccomend it to all from my heart. It changed my life upside-down In the beginning it was more „Mission impossible“ lookalike, but thanks to people who gave me support and helped me, like my family, my team, Fabricio who gave me a place to sleep and train, both in Spain and Brazil, Yuri Simoes , who I like to call brother, and his beautiful family that accepted me as I was their blood, I suceeded, and I’m a happy man today. When I first met Yuri, he was an orange belt 13-year old kid, but determined like no other. Today I’m proud of my little brother, what he did, and what he still has to do. Just wait and see this year’s black belt middle weight division…

4. How do you see BJJ progressing in Croatia? and the region?
Well, when I started, you only had one competition in the region, and that was in Budapest, just look at the region now. When I got my blue belt, there were two of us in Croatia, now you have 10 times more academies than there were blue belts at the time I’m glad it’s growing so fast, but we all still need a lot of work, organization and especially government’s support to make us equal to other sports. Imagine that BJJ is not an sport in Croatia(I don’t know how it works for example in Serbia and other countries…), that I find the greatest insult of all, and it’s a terrible injustice. But we’re working on it, and hopefully our Olympic comitee will recognize this huge effort that is done all over academies in Croatia. What I like the most is that the tournaments are becoming more and more difficult, and that organizers started to follow the IBJJF rules. There was one big mess around this just few years ago.

5. Since you run a successful BJJ school, do you still have time to compete?
The last two years I’m out of competitions due to an terrible back injury that keeps bothering me all the way, but lately it got a little better, and now when I’ve organized a family and kids, hopefully I’ll be back on track soon. I’m training 2-3 times a day, 6 days a week, with my guys, traveling a little less, and started an excellent co-operating with my new conditioning coach Mario Draksler, who takes care for my conditioning and helps my motivation as well. I’m planning an trip to Brazil soon to train with Yuri and Ary, and to see all my Brazilian friends, and it will be a good preparation for what’s to come in 2012. I’m 34 now, for sure not my peak, but I love competing, and for sure I can still complicate a little bit a situation in the brackets

6. Which do you enjoy more: teaching or competing? and why?
I’m enjoying it both really, I’m still learning and being an teacher and a student at the same time. Learning only begins with a black belt, someone once said… But I think competing is much easier job, ’cause you’re dealing only with yourself and your own limitations and barriers, while being a coach you need to be a psychologist, coach, motivator, educator and who knows what more in only one person. It’s not an easy job, and it’s very big responsibility to be involved with kids is such a a delicate age. But if you serve as an example to them your words can become real to them, and can find credibility in what you’re teaching. That’s the biggest salary you can receive, to lead the kids out of the streets and giving them an good example.

7. Tell us about Team Ruckus?

We have an history like 5-6 years ago, when one of the guys – Kristijan Kljaic, who is Croatian living in Switzerland,while visiting his motherland, every time trained in our academy. We’ve become friends and when they separated from Frota, he invited me to give an seminar in their gym. There I met Sam, a great guy and athlete who is instructor there. The guys accepted me right away, and I really liked that crazy bunch of mixed nationalities over there. They joined Werdum Combat Team right away, and today we have an beautiful cooperation and mutual respect. I love those guys hahaha, I laugh so much with them

8. Whats next in store for you and your team in 2012?
My personal goals are always connected with my team’s goals, and my decisions are always balancing somewhere between having an competitive team, but not forgeting the traditional part of BJJ which in our BJJ tree that came from Flavio Behring is very distinctive (like self defence, and MMA and judo part of BJJ, progressive method, gangorra…). Some schools nowdays forget those very important segments of jiu-jitsu, but I think that should not be given priority to the competitions while loosing those elements. It’s both equaly important and my opinion is that BJJ is much more than competing BJJ tournaments. It’s a way of life. It’s respect.

Thanks alot Bojan for taking time to answer our questions.
Thank you for inviting me. It was a pleasure, and good luck with the website and with the competitions! And good fight to Fabricio this Saturday against Roy Nelson in his UFC comeback! OSSS