Caio Terra On His Rivalry With Malfacine, His Dangerous Opponent Igor Rodriguez & Not Being Surprised That Nobody Was Caught With PED Testing… 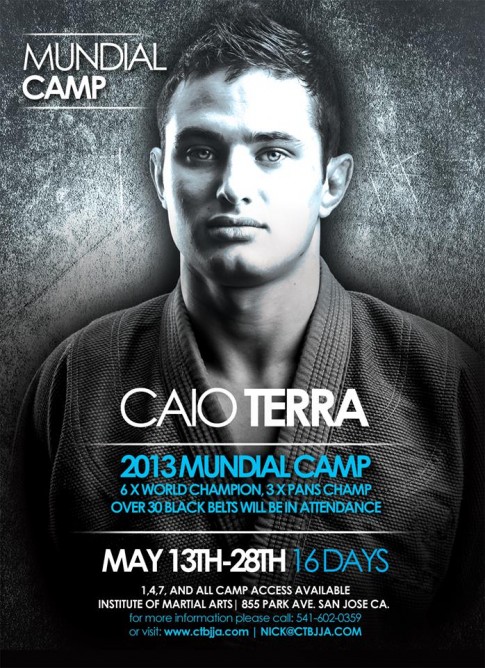 World champion in 2008, Caio Terra has lost the title every year to his eternal rival Bruno Malfacine every year since then. However, the black belt wants to change things in 2013. He beat Malfacine at the Pan by a very narrow margin. In an exclusive chat with tatame (In Portuguese), Caio spoke about the importance of conducting doping tests at World and plans for 2013.

How was your preparation for the Worlds?

I had about 20 days to prepare. I brought in the trainer Itallo Vilardo to organize my training and help me in my recovery for the next day. I’m feeling very well. Starting from today also beginning to use the Versa Climber to help me lose weight. As I was feather weight I do not have this concern, but as I decided to change and this morning was 1.8 kg above, and do not intend to diet because the workouts are very tough, I need to burn some extra calories. With Versa Climber, I can burn almost 500 calories every 10 or 12 minutes.

At rooster weight, fans already expect a final between you and Malfacine. How do you prevent this from making you lose your focus against other opponents?

I prefer not to think about it, because you can always be surprised, there’s no way to underestimate anyone.

How much is Malfacine a rival?

Of course Bruno (Malfacine) is perhaps my biggest rival in the weight class, but also there is Koji, the Fabbio Passos and several other pretty tough guys. But a guy who can really be dangerous is Igor Rodriguez from Buzios. I have not fought him in the black belt yet, because he has only recently been able to come to the U.S. but at lower belts he was better than me when we fought. He’s a guy who is really hard and complicated to fight, so I hope he gets to be in Bruno’s bracket (laughs).

What did you think of the continuation of doping tests after the Pan-American?

It is always good to be involved in a sport that looks to be clean. The doping tests are a big step towards the professionalization of the sport.

Were you surprised that no athlete was caught in exams?

I actually expected that no one would be caught. It is very difficult to catch someone in these exams, especially if the exam is just urine. Still, it’s good to continue with the tests to show that Jiu-Jitsu can be a clean sport for kids that are inspired by us champions.

Did you feel any difference in physical opponents with the completion of drug tests?

It’s hard to say this, because sometimes even one thing has nothing to do with the other. Steroids undoubtedly increase the strength of the person, but may be used for weight loss or gain, muscle recovery so that a person can practice more, injury recovery, etc.. So, it does not mean that everyone who was using were using to gain strength.

Jiu-Jitsu is one of the most active amateur sports that exist, hopefully in the near future we will have more support for the sport to develop more… The important thing is to continue evolving.

What are your plans for the rest of the season?

My goals are always able to spread my techniques and philosophies for the largest possible number of academies and give good support to my affiliates. I will continue competing, but that is not my focus.