Brazilian Jiu-Jitsu in India: Siddharth Singh on Growing BJJ in a Country of 1.1 Billion People 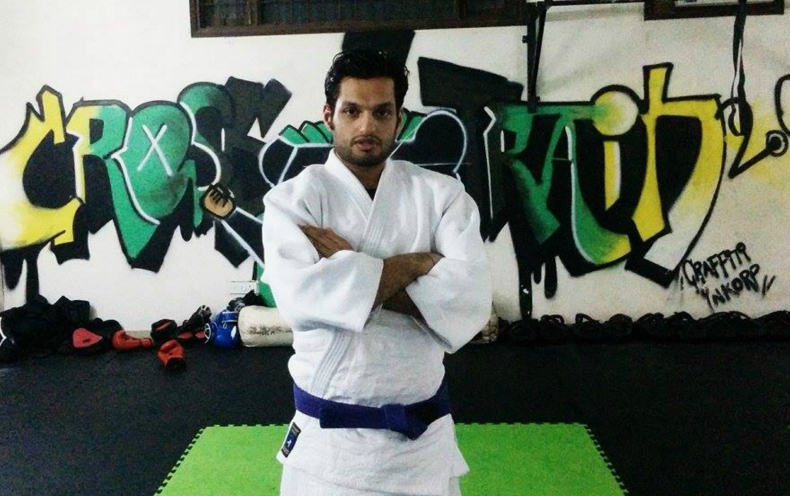 BJJ purple belt Siddharth Singh has an interesting story to tell. He left a well paying job as regional business manager based in London, to follow his passion and spread Brazilian Jiu-Jitsu in India. With a population of over 1.1 billion people and a fast growing emerging economy, India has a huge potential. They already have a strong wrestling culture so why not BJJ? Check out the interview with our Indian BJJ brother Sid:

Hi Siddharth, please introduce yourself to the BJJ community.

Hi Guys, I’m Siddharth Singh (known as Sid) founder and owner of Crosstrain Fight Club (CFC) in New Delhi. I am currently one of a handful of purple belts practicing in South Asia. I was awarded my BJJ Purple belt under Prof Plinio Gonzaga and Prof Marcelo Nigue from Brazil. I also hold a MSc degree in International Strategy and Economics from the University of St Andrews, Scotland and prior to coming back to India was working at Regional business manager for a brand management company in London where I was an International business development manager responsible for the EMEAA region (Europe, Middle East, Africa and Asia).
So as you can imagine my lifestyle has changed a lot, from living out of a briefcase, travelling business class all over Europe, picking up a decent pay check every month to being grounded in Delhi striving to convince hesitant people that they should do BJJ (a martial art they have never heard of) as it would change their life forever. The first few months we really hard as I was struggling to pay the bills and my life savings were quickly evaporating. But two years down the line I wouldn’t change that experience for anything in the world. I grew and learnt tremendously from it.
I have been a student of the martial arts since 1997 when I started training boxing in my school (Doon School). I started Muay Thai and BJJ while I was in the UK and very soon they took over my life, in a good way.

Why did you decide to develop BJJ in India?

I was a big fan of the UFC growing up and saw that in India there were no authentic BJJ clubs and I had been training for a few years In the UK so I decided to come home to set up a club were we would provide a legitimate curriculum. The objective was to set up a school where the trainers were approachable and always willing to help students as opposed to what had been the practice in traditional martial arts in India for decades. In the traditional martial arts scene like Karate and TKD trainers are literally self-acclaimed Gods; they never spar, and some even have a throne where they sit on as the class goes on. Im not joking, a Throne!
We wanted to revolutionise the entire industry with a customer focussed training regime. 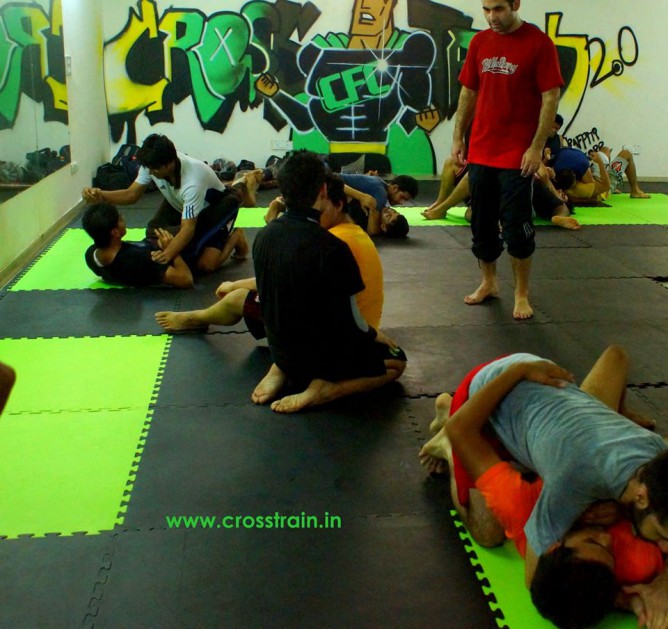 What do you think about the growth of BJJ in India? What are threats and opportunities for BJJ there?

BJJ is virtually unknown in the country that is home to 1.1 billion people. This offers both an opportunity as well as a major challenge. To give you an indication, the UFC which is so popular all over the world is barely a known commodity in India. While most people are familiar with Boxing since India produces strong boxers in the Olympics and Common wealth games, MMA and BJJ are not popular. Only last year people got an opportunity to watch the UFC on TV.
Another challenge in India is fake Karate instructors who call themselves ‘masters’ and claim to teach BJJ when, in reality, they have never attended even a single class in their life. Students, again, who have never trained go for these classes and never return thinking BJJ is not a genuine martial art. All of 2013 and most of 2014 we offered people free BJJ trial classes so as to make them understand and appreciate legit BJJ concept of technique and leverage over brute strength.
Challenge is to get people walking in through the door, once they are in and they do a class, they are hooked. But getting them to try it after previous bad experiences that they might have had with fake instructors is a challenge.

Which BJJ players do you admire?

Rickson Gracie is obviously a God.
My favourites are Marcelo Garcia, Braulio Estima, Keenan Cornelius, Kron Gracie and Andre Galvao.
I also look at my master Prof Plinio Gonzaga and his master Marcelo Nigue from Brazil for I would not know what to do in a Gi without them.

What do you think of the BJJ community of South Asia?

We are a very small community of grapplers in South Asia, in fact when we started Crosstrain Fight Club, we were one of the only centres in India offering authentic BJJ. Over the last couple of years a few more dojos have thankfully opened up with guys who have learnt BJJ abroad have come back to India and started teaching.
Still a lot of work needs to go into introducing people to the sport of BJJ as both a self defence system and as a lifestyle but I feel we are on the right track.

Tell us more about your academy in India.

Crosstrain Fight Club held its first class in Dec 2012. We teach Boxing, Muay Thai, BJJ (both Gi and Nogi), MMA as well as a lot of strength and conditioning.
We have centres in 2 cities in India currently, one in Delhi, the Capital city of India and one in Lucknow, a city with a population of over 2 million people. Both centres and over 2,000 sq ft in the most sought after locations.
We are constantly looking for trainers from all over the world to come down and assist us in our training. We have had blue belts, purple belts and black belts in BJJ who have come and done seminars at our academy. We believe that there is so much to learn in BJJ and the more we are exposed to different types of training the more we evolve as grapplers. 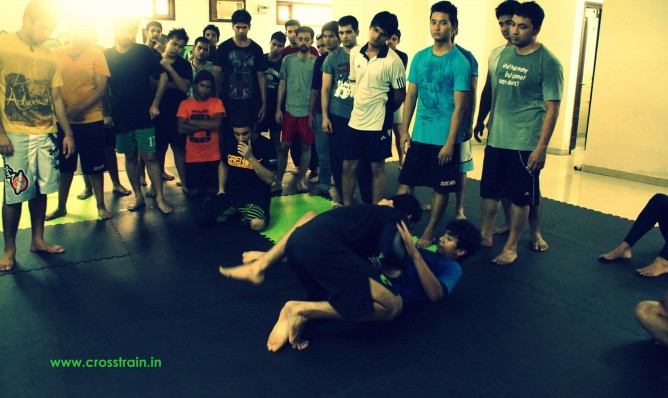 What were the main differences between BJJ that you experienced while training in UK and in India?

The main difference is the knowledge and knowhow. Most people who step into the fight gym in the UK know what MMA is, they know what BJJ is and they have watched the UFC. They enter the fight gym to better understand the sport and to learn if they can make it as fighters.
In India there are 3 types of people who come in. The first type want to learn how to ‘punch and kick’ primarily because they are bored of running on the treadmill.
The 2nd type are the ‘street fighters’ who want to train in the art of ‘Never back down’. They have seen the movie, they come in and they think they know it all. One guy turned up and said he had been training for 5 years however he didn’t know what the puching bag, hanging from the ceiling, was. He explained that he never used it since he used to train by punching the wall! 10 mins later he was seen tapping to a guy half his size. That was the last we saw off him.
The 3rd type are those who have trained under fake/fraud trainers and have been given their black belts when in reality they have never really even sparred once in their life. So a lot of egos are bruised when they roll at our academy for the first time. Big guys with black belts using brute strength get swept and submitted by smaller guys who are white belts from Crosstrain Fight Club.
Those with big egos don’t last and the team currently at our club has been training for over a year now with a great appetite for knowledge and no appetite for egos. All the members are really down to earth and humble, making the club atmosphere extremely friendly and welcoming, which I think is key to spreading the art of BJJ.

2015 will be a big year for CFC, we plan to open new centres in India to further spread BJJ. We also have a number of world class BJJ instructors that we are in talks with to do seminars at our academy.
I personally will be travelling to Thailand (Phuket Top Team) and to the US (Marcelo Garcia Academy) for my BJJ training to help grow my game so I can be better spread ‘Arte Suave’ in the world’s largest democracy.

I would just like to thank our students, our trainers for trusting in our training and turning up every single day. I would like to thank you for giving us a platform to showcase what Crosstrain Fight Club is.
Best Regards
Siddharth Singh
+91 8826914097
sid@crosstrain.in
www.crosstrain.in