Braulio Estima: “Nick Diaz’s Jiu-Jitsu is very good. He doesn’t focus on points but on submissions. This is going to be a great fight!” 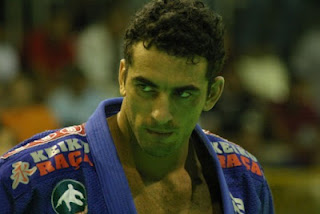 Triple world champion of Jiu-Jitsu, Braulio Estima won the ADCC championship last year, beating Ronaldo Jacare in the superfight of the event, which was held in England. The current focus of “Caracara” is in MMA, the proof is that he is already training with the “Blackzilians”. The Pernambuco, Brazil native has left his mark when it comes to grappling, but as the fighter he is driven by challenges, so he intends to make his futur in MMA. That does not stop Braulio doing Jiu-Jitsu or Submission competition. He is scheduled to make a super fight Jiu-Jitsu (Gi) against Nick Diaz in the Jiu-Jitsu World Expo, which will be held on May 12 in California. Check out the full interview with the icon of Jiu-Jitsu, where he analyzes the fight with Diaz, talks about his MMA debut and plans for 2012.

Braulio how did the opportunity arrive for you to train with the Blackzilians?

I already know Rashad Evans from some time ago and he is one of the founders of the team along with Glenn Robinson, who owns the company Managments Athletic Sports. It all started one day when Glenn contacted me via Marko Leisten, who is one of the heads of ADCC in Europe. It ended up being a pretty solid and interesting project for both parties, so I couldn’t refuse.

Are you going to leave England to live and train in Florida with the Blackzilians?

Actually, I do not live permanently in Florida, because I have my gym and several branches in the UK. I intend to spend a few months training hard there, because the team is very strong and united.

What is the expectation to meet an icon of MMA like Nick Diaz in a Jiu-Jitsu super fight?


The expectation is great, Nick Diaz is one of the best MMA fighters in the world and has a well respected ground game. He’ll have 80kgs for this fight (the limit for the fight will be 81.6 kg), so hopefully it will be a very tough fight.

He has a good guard and has already submitted the black belt Jorge Patino Macaco. How do you see this fight going?

His Jiu-Jitsu is very good and effective. I believe that because of Nick’s style of  fighting which is not primarily focused on points, but in the end, it will be a good fight to watch. I’m training well top and bottom game, then where I fall, I’ll spin. It will be a great fight, that’s all I can guarantee!

When will you have your MMA debut?

Sometime this year for sure. I spent time training with the Blackzilians to see what level I’m at , and I’m really new in this sport. I just need to focus 100% on MMA. I believe that between August and November I’ll have a fight.

You’ve been training the striking part for some time. Have you adapted to getting hit in the face?

In fact, I am already training MMA for some time, but this type of hard, more professional workouts only about 5 months. The transition is not so simple, but in terms of taking a beating in the face, it never bothered me.

Do you still have any aspirations in BJJ or do you want to focus entirely on MMA?

I love the gi. Jiu-Jitsu is where I feel good. No gi as well. I don’t want to leave Jiu-Jitsu for good. I’m just in a transitional phase. The gi will always have it’s place reserved.

I’m in that phase of adjustment details in preparation for my MMA debut, but I will also fight each Jiu-Jitsu and Submission competitions. I have some projects that will surely contribute much to the world of Jiu-Jitsu, such as the launch of books, DVDs, a corporate website with my brother Victor, and many other plans. The ideas are not lacking (laughs).