Bosnian BJJ black belt, Slaven Planinic, talks to us about his journey in BJJ and his love for Filipino Martial arts 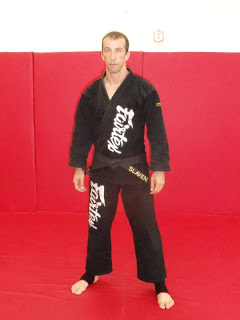 1. Hi Slaven can you please introduce yourself to our readers?
My name is Slaven Planinic 39 years old,from Mostar,Bosnia and Hercegovina,owner and head coach at Inosanto Mixed Martial Arts – Mostar.I am BJJ black belt, Filipino martial Arts/Jun Fan Gung  Fu/Jeet Kune Do certified instructor by Dan Inosanto.
2.Please guide us through your journey in Jiu-Jitsu and MMA
Martial Arts has always been big part of my life,first with Karate as a little kid, then boxing, kickboxing, Taekwondo, wing chun kung fu, muay thai, FMA /JKD,Silat, MMA, BJJ, wrestling,…My goal is to always find something more realistic so I wanna try all different ways and find my way, because we are all different and what is good for one person may be is not so good and practical for other one.With training in different Martial Arts I always try to compete in different styles of fighting because I want to feel that specific Martial Art or Fighting sport.So I have experience in competitions in kicboxing/thai boxing, taekwondo, BJJ and MMA. My first MMA experience was in 1998. and after that I tried to find the way how to improve my groundfighting skills. My first ground fighting training was with 5 x UFC champion Frank Shamrock. After that I met my BJJ teacher and person who taught me everything in BJJ and wrestling: 2x world champion Kazeka Muniz. After ten years with him he promoted me to black belt
3. You actively train BJJ and Kali/arnis/escrima. Can you please tell us more about Kali and how does it compliment BJJ?
I also train other Martial Arts to but my big love is Filipino Martial Arts.It is for me the most realistic way and a amazing arts for self defence.FMA are famous for his blade work,fighting with different styles of blade and fighting against the blade,also very realistic empty hands work (panantukan-filipino boxing and dumog – filipino grappling,dirty clinch fighting). My FMA teacher is legendary Dan Inosanto,a living encyclopedia of martial Arts,student and training partner of Bruce Lee and he promote me in FMA instructor ( and also JKD instructor).
4. You have travelled many times to train in States with Kazeka Muniz. How were the trainings there and what did you learn the most?
In 2007.I competed in the European BJJ Championships in Lisbon and I took second place,same year I travel to Califonia for the World Championships and I lost first fight against a brazilian fighter on points but that time I fight with broken ribs. I traveled in California so many times on three, four, six months training trips. My teacher Kazeka helped me so much in my training, he taught me BJJ, grappling, wrestling and MMA. Also I used the oportunitty to train with many great fighters and coaches (Draculino,Samuel Braga,Guilherme Vasconcelos,Cleber Luciano,Fabricio Werdum,Rafael Cordeiro,Cyborg,JJ Machado,Rigan Machado,…)
5. Tell us about your academy in Mostar and about your best students.
In Mostar I opened the first Gracie Barra BJJ club in my country with my teacher Kazeka Muniz (he is Carlos Gracie jr.black belt).Now we are part of Kazeka BJJ and we compete with that name. In the last few years I produced some very good blue belts and now is the time to compete more in regional tournaments (Croatia,Serbia,…) because of experience and very soon,I hope,that you will be able to see good fighters from my school. For now I have Sasa Musa who won a few tournaments, Davor Saravanja last year King Tomislav champion, Boris Pandza, Tino Zoric, Bojan Karadeglija, Mateo Bioksic, and my first blue belt Mario Marijanovic.
6. How is the BJJ scene in Bosnia? How do you see it progressing in the next 5 years?
In my country we have some BJJ/grappling clubs but no competitions and no organisation.We don’t have BJJ Association and fighters can compete only on tournaments outside (Croatia,Serbia,…).I really hope that this will change because we have some very talented fighters but for success you need experience,more fights.
7.Do you plan on competing in BJJ again in the future?
I really don’t know,I want fight but also I am very busy with traveling and training different Martial Arts.So I don’t think so because for that you need focus yourself for one thing (BJJ) and I don’t wanna stop training and exploring other different Martial Arts.
8. How would you describe your BJJ style (your game, what are you good at)
Leg lock killer hahaha.I am joking but really what I am doing best is Leg locks from so many different positions.I also like butterfly guard and spider guard because my long legs but leg locks is on first place for me. The bad thing in BJJ is that you can’t use so many leg locks, only from brown belt level and people lost many years without practising them so its hard for them defend legs.
9. What is next for you and your team in 2012?
In 2012, I have many plans,very soon I will travel in California again.Training with Kazeka,with Rafael Cordeiro,with Dan Inosanto,working more with kettlebells with my instructors Dr.Mark Cheng and Mike Krivka,Silat camp in May,Legends seminar in June,Inosanto instructors meeting in October in L.A. then MMA/Muay Thai event in Mostar,…
10 Slaven thank you for taking your time to answer our questions. OSSS
No problem,thank you my friend,keep doing great job,your web site is great for BJJ promotion in Eastern Europe!
Marcelo Garcia is a 9-time World Champion and known for getting to the back and finishing with the rear naked choke, even against much bigger opponents. This four-part system covers taking the back, jumping back takes, maintaining back control, and finishing from the back. Learn Marcelo Gracia's famous Back Attack System. USE PROMO CODE "BJJEE TO GET 10% OFF.