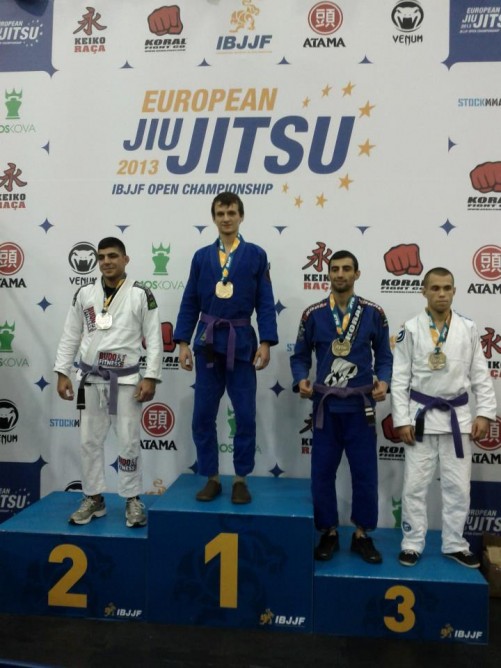 Ostap Manastyrski is a Ukrainian-Canbadian purple belt BJJ European champion and World medalist. In this Interview with BJJEE, he talks about dedicating his life to learning and teaching jiu jitsu:

1. Hi Ostap, can you please introduce yourself to the BJJ Community of Eastern Europe? 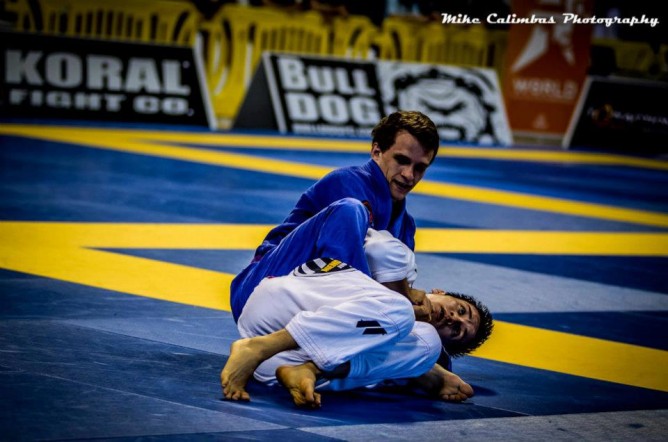 Like most children from my Bokanovsky group, I fell in love with grappling thanks to Neo-Pavlovian conditioning and hypnopaedia. My Ford, it’s quite amazing what mild electric shocks will do for your guard game. (laughs)
In actuality, my martial arts journey started on a couch playing Tekken with a friend. Hwoarang had by far the best looking style of all the fighters, so naturally I decided to bug my parents to signing me up for Tae Kwon Do. Two years and some sweet katas later I decided to explore other options. Next I went to a Jeet Kune Do school which was a ton of fun. I got to train in stand up, clinch, ground, sticks, knives, buckets, etc. I enjoyed all of it but grappling really peaked my interest.
Since you’re reading this on a BJJ website I probably don’t have to tell you, but to those that haven’t tried it, I can’t begin to explain how fun it is. Imagine an activity where all of your being is engaged. You are constantly interpreting tactile data throughout your body. Assessing you and your opponent’s position and then creating a plan to gain an advantage. All of your limbs and muscles are used to overcome the road blocks your opponent is putting in your way. BJJ is real time problem solving done with your body and mind. There are so many different positions, each which has its own variables and nuances, that it creates an organic and artful game with limitless possibilities.
That’s how I look at it now, but I wasn’t completely hook back then. I joined a local BJJ school in 2005 while in high school and trained I think about 3 times a week. Life moved along and I went to university, still training a decent amount. It wasn’t until I came home for the summer after my second or third year that I really turned up my training. I would go to work and then to gym for the rest of the day. 6 days a week. I had drank the kool-aid. When I was away for university I trained at the university club and then ended up running and teaching it after the other instructors left.
When university finished, I had some pocket change saved up and I decided to take a training trip somewhere and train for my first World Championship. Up to this point most of my training was no gi, with bit of gi intermixed. I decided to train at 50/50 BJJ in Arlington, Virginia under Ryan Hall and Seph Smith. This was when I first started training twice a day, full time. I was there for about 8 months, competed a ton, and learned so much from both of them. My game shot up a level. I’m really thankful for the experience and it showed me that this jiu jitsu thing was possible.
With my funds depleted, I moved back home to Toronto at the end of 2011 and was looking for a place to train and possibly teach. My friend, Elliott Bayev, who was actually one of my very first BJJ instructors had a gym that just opened up in a new location and I got the opportunity to train and teach there. Now you can find me there usually 6 days a week doing that zhoo zhitsu.
In 2012 I competed at the IBJJF Pans and Worlds with good results. I lost in the quarterfinals of Pans to Paulo Miyao, but that match showed me that I was good enough to hang with the best of my division. I won bronze at Worlds a few months later, having a really fun match against Joao Miyao in the semifinals. And just this past January got my first IBJJF gold at the Europeans in Lisbon.

3. Please tell us about the BJJ scene in Toronto and Canada. How is the sport growing there? Is it growing as fast as in the US?

We have a really awesome grappling scene in the Toronto area. It’s probably the most developed one in Canada. There is at least a tournament or two every month and the competitors here are tough. I’ve had the chance to compete throughout the northeastern US, in addition to the major championships and I’d put our top local athletes on par with any other region’s.

4. Please tell us about your Ukrainian Origins. Do you ever plan to do some something with BJJ in Ukraine?

I was born in Lviv, Ukraine and my parents immigrated to Canada when I was four. I grew up speaking Ukrainian and going to a Ukrainian school. I’ve been back to visit family a few times. I wanted to do some BJJ while I was there but alas there was no where to train. My Ukrainian used to be really good, but it has slow deteriorated over the years. Maybe one day I’ll try to reclaim my native tongue. I’d love to do something BJJ related in Ukraine one day. It would be great to see BJJ flourish there.

5. Please tell us about your academy and your team.

I train and teach out of Openmat MMA in Toronto, Canada. My head instructor is Elliott Bayev is a black belt under Shawn Williams. He runs an awesome gym. The vibe is really friendly and welcoming to beginners and for the more serious competitors we have the hard training necessary to do well internationally. Just recently Elliott represented Canada at the FILA world championships held in Poland. He had a really good time and traveled a bit around Europe. I know he is at least part Russian and I think he liked getting back closer to his roots.
We have a lot of good BJJ competitors. Darson Hemmings will be competing at the World Pro and ADCC this year. We have a bunch of killer blue belts including Bruce Miano and Marek Nowak. We also have pro MMA fighters training with us. It’s a really great gym with a lot of hard work being put in on and off the mats. 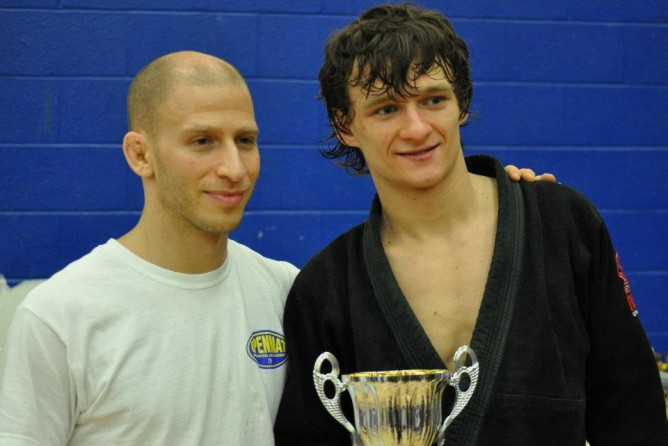 Ostap and his instructor Elliot Bayev

6. Where do you see yourself in 5 years time?

Five years is a long time away. I hope by then I will have had my rookie year at black belt and will be competing comfortably in the division. I’m really excited to be able to put my physical and mental skills to the test again the best. Another thing I would love be doing is traveling and doing seminars. Although competing is fun and very valuable, my passion is teaching others. Having the opportunity to see the world and experience different cultures all the while helping people improve their jiu jitsu would be a dream come true. Eventually I want to have own academy. The timing on that is still up in the air, but in the next five years it’s definitely a possibility.

7. How would you describe your game and what are BJJ players that you admire?

I think my game can be summarized with two words. Headlocks and hammerfists.
I don’t know if these attribute necessarily describe my game right now, but when I perform and teach jiu jitsu I’m going for: exciting, attacking, meticulous, and rational.
As for the BJJ players that I admire, firstly my coach Elliott Bayev. He has a lot of experience and an open mind to BJJ. He is great as an instructor because he encourages us to build our own games and doesn’t try to enforce just his own ideas. He is always helping me explore jiu jitsu.
Jonathan Thomas. This man has improved my jiu jitsu understanding so much. For those that don’t know he is a brown and purple belt world and pan champion and an analytical machine. Jon reignited in me the joys of discovering and figuring out jiu jitsu on your own and taught me the importance of positional sparring. He also taught me the Austrian School of economics and arm wrestling, but that’s kind of unrelated.
Other guys that I like to watch are Leandro Lo, Guilherme Mendes, Rafael Mendes, Lucas Lepri, Marcelo Garcia, Caio Terra, etc.
My focus usually jumps around based on what aspect of my game I’m working on, but there’s nothing better than watching the best in the world put their craft to work.

We have myself and a few guys coming out to compete at Pans in a few weeks. Worlds will be the next big one after that. I think we’ll switch focus a bit to no gi after Worlds. Darson will be getting ready for ADCC and Openmat will come out in full force to the No Gi Pan in New York and then No Gi Worlds.

9. If you want to thank somebody or sponsors, feel free

Thanks to BJJ Eastern Europe for the interview. Thanks to all the coaches, staff and students at Openmat for their continued support. Please like my facebook page: http://www.facebook.com/ostapbjj
Sponsors? Yes please

10. Thanks Ostap and all the best!

Thank you! You guys rock!