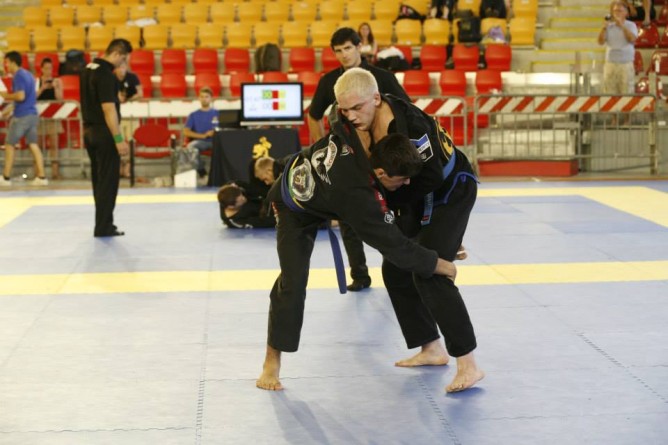 At just 20 years old, Stas Varshavsky has a huge potential for success in BJJ. This very dedicated young man is determined to train hard and to take Russian BJJ to the forefront of the world BJJ scene. Find out more about Stas:

Hi Stas, can you please introduce yourself to the BJJ Community of Eastern Europe?

Hi, my name is Stas Varshavsky, I’m 20 years old Blue belt under Kristian Cestaro, living in Moscow, Russia.
My main titles are: 2 times European NoGi champion, European Gi bronze medalist.
How I started BJJ is a weird story. When I was 17 y.o., I was really fat boy, about 120 kilos and I was just playing video games. In the end of 2008 I went to local fitness club and there I met my first martial arts coach, so, I started to do martial arts since the beginning of 2009. I was doing a little bit of Judo and Sambo, then I switched to grappling and in April of 2011 I met Kristian and never quit since that time. The point is that I really liked ground game, submissions etc, but we didn’t have any high level Jiu Jitsu coach before Kristian appears here. Good friend of mine and current teammate told me that I need to try and train with Kristian, so, that how my Jiu Jitsu started.

You have really blown up on the major European competition scene in the past year taking gold medals left and right at big IBJJF tournaments like Europeans, London & Rome Opens and European No Gi. What triggered your success?

Haha, in my opinion it’s t safe to say “blown up”. What triggered my success? It’s simple- Hard work, dedication, sacrifice, my team, my professor and my dream! I do believe that turning point was when I get medaled in London, getting 3rd place in Gi and 1st place at Euro NoGi. After that I started to believe in myself more and more, started to work harder and smarter. And I did lots of sacrifices, such as my social life and my education, partially. I do believe that if you follow you dream, you work hard and you pray, you will achieve you dreams one day, with Gods help! 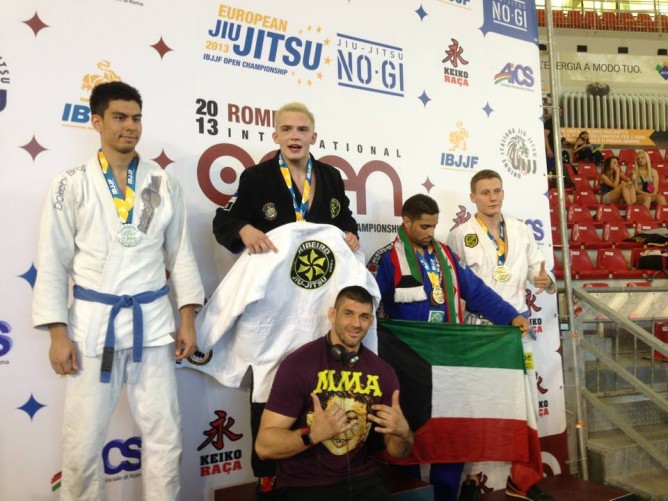 Please tell us about your academy in Russia, Kristian Cestaro Team (Ribeiro Jiu-Jitsu). How do you see the growth of BJJ in Russia?

I’m training in Ribeiro Jiu Jitsu Moscow (Kristian Cestaro Team), our academy is not so big, but we have really great student and tough guys and our main “weapon” is our Gigante, Kristian. We don’t have really big team but our guys are very versatile, I mean we have really good guard playes, good passers and so on, that’s why my academy is really best for me! My professor and friend Kris is awesome coach. All the Jiu Jitsu skills I have- it’s his merit.
Jiu Jitsu is growing in Russia, that’s for sure! I remember 3 years ago most of the people barely know what is Jiu Jitsu and today we have 4 big teams with bunch of competitors. But anyway, this sport is new for us and we have only 3 black belts in Moscow at that time, but we are getting stronger every year! The problem is that we have lack of competitions here in Russia, that’s why I’m doing my best to compete in Europe as much as I can. I hope that we will bring IBJJF to Russia in near future! That’s the plan!

Last weekend, you got golds at the IBJJF Rome Open and European No Gi Please guide us through your matches.

Yeah, I did, haha, thank you! You know, before this trip to Rome I was kinda nervous, because I understood that I must do my best to “defend” my Euro NoGi title and the point was that I did it once as a blue belt and now I need to do it one more time, but we, competitors, know that maybe you will not be able to do it once again, because it’s jiu jitsu, the toughest sport in my opinion. So, before my flight to Rome there were 3 things on my mind: I need to take the Gold in Gi, because I’ve never done it before. I need to defend my Euro NoGi title and 3rd one- I need to do my best in Gi absolute, because absolute is always on my radar.
So, on 1st day of competition, the Gi day I won 3 fight in my category, all by submissions. 3 chokes: Breadcutter, Cross Choke from Mount and kinda Bow and Arrow from the guard, then I steped in absolute, won 1st fight by points, 2nd fight by 2 collar Bow and Arrow against the biggest guy in open class( btw, I started from the bottom, yeah, I pulled guard!) and lost my semi-final to Miha, I was winning by 8-2 I guess and 1 min before the end of the fight I passed his guard but it was the trap- he got me into baseball bet choke! I knew that position and I do it too, but that time the second grip on my collar wasn’t on, he grabbed it at the same moment I passed his guard, so, I got myself in troubles! Haha. But I was really happy to lose to Miha, he is a great person, great competitor and he did GREAT! I was dominating, but he used my small mistake and capitalized on it! That is Jiu Jitsu! So, my Gi day was over: 6 fights, 5 wins, 4 by Subs( chokes obly, lol) and 1 lose. The second day was tough! I wake up and realized that my body is really sore! Haha, but I had no choice- I was there to compete! I had 3 matches in NoGi, I finished 2 of 3 by sub, by triangle choke and one fight I won by advantages. In my 1st and 2nd NoGi matches I faced 2 guys, who didn’t do Rome Open, so they were not as tired as I was, haha. My second match in NoGi was really tough, the guy was a wrestler I guess, so, I pulled guard, he went to half guard and was just stalling( sorry bro, if you are reading it, but you didn’t try to pass), but he paid for this stalling- ref gave him a penalty and I was 1st on scoreboard and 30 seconds until the end of the match I managed to score one more adv by good sweep attempt. In final I fought the same guy I fought in final of Rome Open day before, I closed the triangle from the guard, swept him in triangle and finished him in mounted triangle( Paul, you are tough man and it’s my pleasure and honor for me to fight you!). That’s my little Rome Competition story! 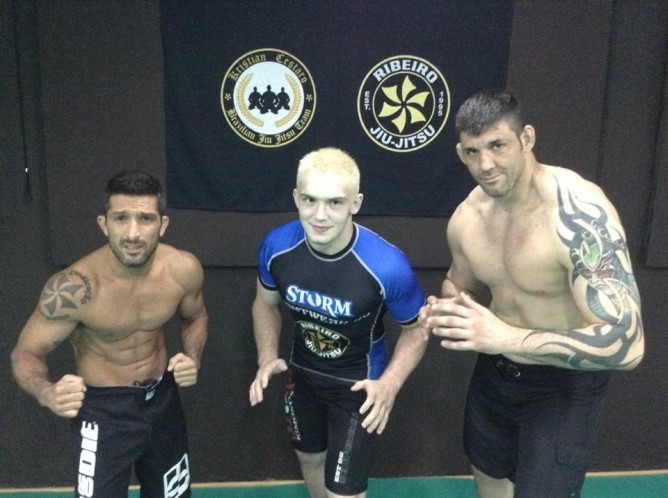 Tell us about your time spent In Brazil training there.

Oh man, good times, good times…. I was there 2 times, but I’ll better tell you about my 2nd trip! It was july of 2012, I came there to participate in Ribeiro Jiu Jitsu camp and then compete at Rio Open. The camp was great! It was so exciting! Unique opportunity to share the same mat with the General, Saulo Ribeiro, his brother Xande, Fredson Alves and Rodrigo Pagani! We had 10 days of camp, training 2 times per day! Amazing experience! Saulo brought there his students and it was really good experience for me to train with the guys from UniJJ( Ribeiro HQ) on dailybases! And prof. Pagani also have really tough guys! That was 1st time I felt Saulos mount and chokes! Man, if Saulo mounts you, you are done! Aside of Jiu Jitsu we had great times in Niteroi, Rio state. We went to the beautiful beach, we climbed the mountain and ate Acai! Hahaha
So, guys, if you would have a chance to visit Niteroi- visit prof. Pagani academy, RJJ Brasil HQ!

What is next for you and your team?

Now it’s time to fix mistakes and continue work hard! Even harder then before!
Also I think and I feel that for me it’s time to move to the next division, because I like challenges! Really like it! But, it’s all up to my great and highly respected professor Kristian.
Speaking of competitions- I’m going to compete at all major IBJJF tournaments in Europe, because it’s not as expensive as going to USA. Also I heard that UAEJJ is going to hold NoGi Elite championship, so, it’s also on my radar! And the plan for 2014- USA, Pan Ams or Mundial, whatever!
Next for my team- I think we will move to a bigger gym sooner or later and I’ll do my best to make it happen. Team is growing, we have affiliated academies in Russia and Belarus, so, I hope we will bring more competitors from our team to Euro 2014!

First of all I wanna thank my entire team- guys, I’m nobody without you! Also I wanna thank my professor Kristian Cestaro and very very good friend of mine, my brother Mikhail “Grande Pai” Pogodin– both of you guys are my source of inspiration! I wanna thank my family for helping and supporting me to live my dream! I wanna thank one beautiful girl, who gave me tons of support during my stay in Rome! And of course I want to thank God for everything! I’m happy to be where I am and I happy to live my life! And I wanna thank Saulo and Xande Ribeiro for the inspiration, Rodrigo Pagani for his sharp details during his visit to Moscow and Darragh O Conaill for his suppor during my fights in Rome.
I wanna thank my sponsor Fightwear.ru , guys, if you need any equipment, Gi etc- check it!
One last thing, maybe it would sounds weird, but I really want to thank IBJJF for growing of Jiu Jitsu in Europe and worldwide. It’s really important for us, competitors

Thanks Stas and all the best!

Thank you! Run with us or run from us!