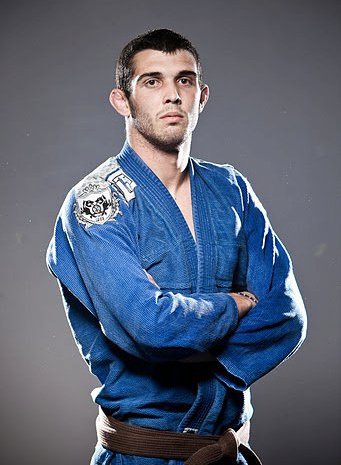 Sean Roberts is one of the best Brown belts in the world and is known as a triangle machine. In this interview with BJJ EASTERN EUROPE, he talks about how he got into BJJ, his triangle choke and Lloyd Irvin’s Brown Belt Kumite were rumors say that he did very well.

1. Sean, can you please introduce yourself to the BJJ Community of Eastern Europe?

My name is Sean Roberts. I’m 23 years old. Right now I live in Oakland, California but I tend to move around a lot. I’m a brown belt currently training out of both Ralph Gracie Berkeley and San Francisco.

The main sport I enjoyed when I was young was basketball. I played basketball since I was around 10 years old and I played every chance I got. Because of all the time I put into basketball, I became quite good and played for different leagues. When I got into high school I wanted to be on the school’s team but got cut in the 1st round and that was one of the last times I played basketball. Now I had a lot of free time on my hands and tried out for the wrestling team. I enjoyed it at first but realized that I was not that good, mainly because I didn’t put in 100%.

During wrestling season I wanted to start martial arts again because when I was young I did karate and enjoyed it a lot. I was looking on the internet for martial arts places when my dad talked to me about a sport where 2 guys would fight each other in a cage until one would become victorious. He told me that this little guy had this crazy style of fighting where he would take the guys down to the ground and choke them and bend their arms in weird ways. I immediately went on the internet and it turned out that the sport that my dad was talking about was the UFC and the little guy was Royce Gracie. I watched jiu-jitsu instructionals and thought it was the coolest thing I had ever seen. I would watch the same moves over and over until I was sure I would be able to do them right. At the time I would just show the moves I learned to my dad until one day he told me to look up the nearest jiu-jitsu school because he was tired of being my dummy to practice on. I found a small jiu-jitsu school called Ralph Gracie Yorba Linda. Later that month we went over there and I took my 1st ever jiu-jitsu class with the black belt instructor Brad Jackson. I was very confident that I would be able to hang with some of the students there but after every white belt in the gym beat me up things changed very quickly. I thought it was absolutely amazing how the lowest belt in the sport could easily defeat me and I quickly signed up.
At first I would train only 2-3 times a week, but after a month of training I just wanted more so I started to train every single day. After about 5 months, a new instructor came in to teach for Brad Jackson. His name was Eduardo Fraga, a black belt from Brazil. He was also a very good instructor and after training for a bit longer I felt like I was getting good enough to start competing in jiu-jitsu tournaments. My first tournament was on December 15th, 2005. I fought in the teen’s division and placed 2nd. After that tournament I began to compete every chance I got. About a year and a half later, Eduardo had to go back to Brazil and Bruno “Mamute” Paulista became our new instructor. The gym had also moved to a bigger location in Orange County. While I was training in Orange County I was taking private lessons from Brad Jackson once a week for a couple years which really excelled my game. In late 2009, I was encouraged by Ralph Gracie to move up North to improve my jiu-jitsu even more. I started training at the Dublin academy for a bit and then moved to San Francisco in 2011 to train under Kurt Osiander and the group of Ralph Gracie’s most elite black belts. Now I train at Ralph Gracie Berkeley under Eduardo Fraga, the same instructor that I had back in 2005. Eduardo and I travel to San Francisco on Tuesdays and Thursdays to catch the advanced classes.

3. At what point in your life did you realize that you wanted to dedicate your life to Jiu-Jitsu?

There was never a specific point in my life where I decided to dedicate my life to jiu-jitsu. I loved jiu-jitsu from the beginning and the more I trained the more addicted I got. Now it’s to the point where it’s a part of who I am. If I couldn’t train anymore it would be a devastating blow to my life.

4. You are known for your triangle. Is this something that you’ve been working on since you were a white belt? What advice would you give to someone who wants to become a triangle machine like you?

The triangle is just a move that clicked for me, just how X-guard clicked for Marcelo Garcia. By now I’ve must have done the triangle thousands of times so I’ve done a lot of trial and error with this specific position. I guess a good way to get good at triangles would be to send me a message over Facebook and I can answer your questions. www.facebook.com/trianglemaster. But if you want to get REALLY good, you can take a private lesson with me.

5. Please tell us about the North Cal BJJ scene. How does it compare with So Cal in terms of BJJ level?

Northern California has some really tough guys and really good schools. I can think of several champions that come out Northern California. Southern California is definitely one of the best places to train in the world; it has so many schools and black belt world champions. I don’t think that So Cal produces better guys, I just think for every 1 person that trains up North, 4 people train down South.

6. Please tell us about training under Ralph Gracie and the other instructors there.

Training under Ralph Gracie and the instructors was a big change for me at first. The schools up North are a lot more intense and no matter how good you are there’s always going to be good training. I get pushed a lot harder than I did before and that made me mentally strong and gave me a better work ethic.

One of my favorite competitors has to be Marcelo Garcia, not just because he is the best. I like the way he presents himself and I just don’t see how anyone could dislike the guy. Another person that I like and I’m watching is Leandro Lo. The stuff that he does is unbelievable. It’s going to be hard for anyone to find a chink in his armor.

8. You are a frequent competitor that travels a lot to compete. Why do you like to compete so much?

I’m a very competitive person so I love the thrill of competing. There is a part of me that also hates competing. The feelings that I get before a tournament are absolutely horrible. I get so nervous that my legs will sometimes start to shake and I get sick to my stomach. It also makes me get irritated very easy and I don’t like to be around people before the tournament. Once I step on the mat, all those feeling disappear and I’m able to have incredible focus throughout the match. If I win or lose I never regret competing and I always want more.

9. You recently were involved in Lloyd Irvin’s brown belt Kumite. What were your impressions from training at TLI and their facilities and team mentality?

I can see why their team is so good. They have top notch training partners and unparalleled training equipment. I even saw a machine they use to simulate altitude training. The way Lloyd Irvin treats his students is amazing. He is a very generous person and I think a lot of the students look up too him as a father figure. As for the team’s mentality, I didn’t hear one negative word spoken out of any of the students and they were all very open-minded.

10. How would you describe your style of Jiu-Jitsu?

My mission is submission. I have a very offensive style of jiu-jitsu I never look to win by points. I’m always seeking for the submission. I’ve never even gotten a warning for stalling in any of the matches I’ve had. I feel that my style is very creative and I have a lot of moves that will catch even the best black belts off guard and I have people that will confirm that for you.

Well Pan Americans and the World Championships for sure. I pray that I get my black belt soon because I feel like I’m ready to compete against the black belts and I will get to challenge myself even further. I’m also planning on getting married this year to the girl of my dreams but don’t worry, I’ll still be training and competing all the time.

Thanks. Also I would like to thanks a few people; my parents, my fiancée, Ralph Gracie, all of my past instructors, all my training partners, and my fans.