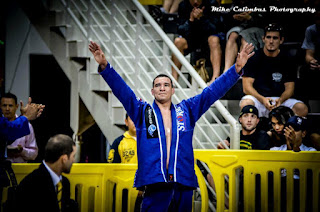 
3x World Champion (1998 – Brown Belt, 1999 & 2000 – Black Belt Absolute Division), Rodrigo “Comprido” Medeiros is a historical Brazilian Jiu Jitsu black belt under Romero Cavalcanti. He recently retired from the Worlds after losing respectably to Alexander Trans 4-2 in the quarter finals of the Worlds.
Comprido left his belt on the mate and was applauded by all the fans present in the stadium. It was a very emotional moment.
This two time World Open Weight Champion has been a force to be reckoned with for over 14 years in the Black belt Divisions. Today, semi-retired from competition he is one of the best BJJ coaches in the business for both sport Jiu Jitsu and grappling for MMA (Mixed Martial Arts), having trained highly successful MMA fighters such as Dean Lister, Mike Russow and Brock Lesnar. 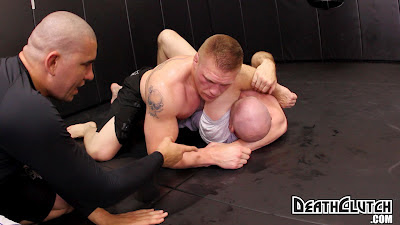 1. How was it working with a man of Brock Lesnar’s size and wrestling ability, and did it help you with your Jiu Jitsu?

He’s not just bigger and stronger than me, he’s also more athletic and faster. He’s a huge challenge. I have to be much better on all the details when I train with him, my technique has to be perfect. He’s kind of a nightmare.

2. What were your impressions after this year’s Worlds?

After I came back home I could not stop to think about 2 things:
How Amazing was Buchecha’s performance. he reversed the result vs Nogueira and Rodolfo , Very impressive . He just refused to lose , I take my hat off to him. The other thing I can’t stop to think is how they can commit so many mistakes with Caio Terra! He has 4 controversial finals in the last 4 years. I just don’t understand how they give the fight to the other fighter. It’s so bad that Andre Negao said he was confused and with the arms and gave the victory to the other fighter (but that’s ok because the other 2 referees also gave the victory to Bruno) . Then Cabelinho says he didnt know that the fight was going to decision and he just followed Andre Negao’s decision. I’m not going to talk about Caio . People often say Caio complains too much , I think if I was in his position I would too.

3. Please tell us about the new academy that you are opening.

I finally Opened my own place . There I will be able to train my students in a very efficient way . Having seminars with great teachers and develop Bjj on very high level.
Compridobjj is in Bloomingdale IL inside Stredford Square mall . Please check out http://www.compridobjj.com/

4. You recently retired during this year’s worlds. Is this a complete retirement from all BJJ competitions, or just from the Worlds? 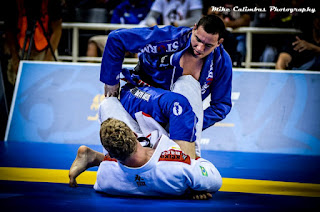 I haven’t retired completely. I just stopped to Compete at the worlds . I’m going to fight in other tournaments .

5. What are your best memories from your Jiu-Jitsu career?

There are many! When I submitted Roleta in 10 seconds , tapped Nino, fought Ze Mario , Margarida , Pe de Pano , every time I see my student wining … Lots of good moments.

6. Who were the toughest guys you have faced in competition?

Roger was the toughest , but my biggest challenge was always push myself to the next level.

7. please tell us the growth of the BRASA association, and about your affiliates in Greece, Turkey, Poland and other countries.

Brasa is growing again and we are doing a long term work with the Tean . I want re-claim the team title for Brasa and we are working hard to accomplish that in the future. We have academies in Finland , Belgium , Greece , Poland , Portugal and I’m very Happy with the level of European Jiu-Jitsu . I plan to stop by in Europe after the Bjj Camp in Cancun in September . I love European History and I Hope to have a chance to teach in different countries. Thanks verry much!