BJJ in Turkey, Burak Değer Biçer: “My goal is to make my students better than me” 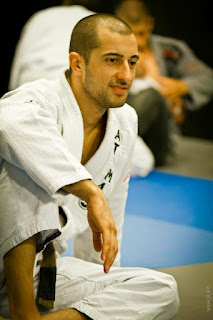 1.Hi Burak, can you introduce yourself to the Eastern European bjj community?

First of all I think that it’s great that you are creating a website that unites this region. We really needed it. I was born in 1977 in Istanbul. I am a brown belt and currently represent ADCC in Turkey. My story in martial arts started when I moved to California SD in 92. I trained in many martial arts which in some way never satisfied me then started Muay Thai. I was training under Ajarn Penya at the time and started to teach in 1998. During this time I hosted many seminars and training camps for socially active groups and military personnel. After finishing high school I started college and I hated it! I was studying psychology and practicing martial arts as a hobby. I went to my counselor one day and she asked me a simple question ‘’where would you rather be now’’ my answer was ‘’I would rather train’’ I quit school and started to see this more professionally in following years. Many thought I was crazy. I moved back to Istanbul in 2001 and saw that there was a great opportunity and lack of instructors at the time.

2.How did first come across bjj?

In 1994 I would go to blockbusters a movie rental shop in the States and rent UFC 1-2-3. At the time anything I that I could get my hands on regarding fighting. I would like to read watch and research. The UFC shocked me especially BJJ. Back then bjj was very limited even in States. I trained with some sub-wrestlers but the moves were not clean and clear at the time. However they had some really good wrestlers in California. I trained with some grapplers but didn’t get much from it. After I moved back I met Ersin Aplaslan at the time he was purple belt now a brown under Valente Bros, directly under Grand Master Helio Gracie. I trained Gracie jiu-jitsu with him for couple of years. This was such a fun time for me as he made me understand leverage and mentality I also
learned so much from Cenk Biber who was a blue belt but a crazy good one. Both of these guys were not doing this professionally so I decided to start my organisation and lean more towards BJJ than GJJ and it’s been growing ever since. This was the time that I decided it’s what I was looking for all my life and started to lay the bricks down for future transition from MT to BJJ.

3. Please tell us about your new beautiful academy in Istanbul. I’ve seen the pictures, it is very impressive. You also have so many visiting instructors passing by for Seminars.

Corvos Academy (www.mma.com.tr) was built a year ago. It’s a 350m2 area with top of the line equipment. We hold regular seminars, camps and events. The academy is regularly visited by not only world champions but also businessmen and other professionals who visit Istanbul with their GIs . We have a no ego environment, welcoming all bjj family. We promote healthy living and Bjj as a lifestyle.

4. How do you explain that such a large country like Turkey doesn’t have a stronger bjj tradition?

The main reason is that there is no federation. So everything we do here we do from our own resources. Also second reason is that there are no tournaments. Once there is a federation there will be tournaments which will push the art to new level. Just like in any country it’s going to take some time for people to understand it. That’s what we are trying to do. Our national sport is wrestling. With tradition comes being closed to new things. I regularly find myself explaining to people same thing over and over again and see so much talent unrealized. I believe that will change in the future. Here is like the first days of BJJ in states. What Gracies went through we are going through right now.

5. How do you, on a personal level, improve when you spar every day mostly with your students?

I think it’s good and also bad. When I started BJJ I realized noting can be just good or just bad as long as you stay on the mat. If my defense gets bad from side control I start to put guys to this position. I regularly try certain moves in training which opens my mind to variations. You don’t always have the luxury to do this with black belts. You need someone with mistakes to execute. The more I do this, the more challenge they give me. My guys are getting better. But my goal is to make my guys better than me so I try to improve myself through visits to Brazil, Europe and still try to compete to learn new things and sharpen the blade so that I can actually pull my guys to new level of challenge. As long as my students improve than I am fine. I don’t have to be the best in the world but I guarantee one of these young talented kids I raise will the there one day with the top of the food chain.

We have 6 affiliates in Turkey now and still growing. I think I will have 2 more in next 2 months. We also have one in Baku, Azerbaijan. Believe it or not, we are also very close with Greek team and consider them our extended family. Having an academy is great but limits me to reach many people who are in need of instruction around this region. So I will travel more to teach and fight this year. We will also be hosting a summer camp this year in beautiful Antalya with some surprise names. Every year we attend Europeans with more students I think next year is going to be record number of Turks in Lisbon. We will host an ADCC tournament here in Istanbul towards end of this year. Planning a referee course in August for ADCC. I am also currently teaching BJJ to a Turkish champion in kickboxing helping him transition to MMA. I believe this is going to be an exciting year for Turkish BJJ&MMA and also for East European community.
I would like to salute all your visitors, all the practitioners in east Europe wishing you guys a great year. Oss.