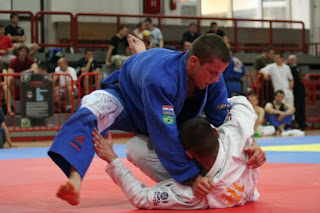 1. Matko can you please introduce yourself to the Eastern European BJJ cmmunity?


Hello to all readers of BJJEE, props for the very good and actual BJJ website!
Matko Kvesic, brown belt, training now almost for 10 years in Black Dragon gym in Zagreb, Alliance Jiu-Jitsu affiliated school in Croatia.
I have a regular daily job in IT branch as a consultant and it wouldn’t be the same for me if I was a pro jiu-jitsu fighter.
Certanly it is not easy, training for competitions and having a separate daily job, but in the end I really like it this way, combining life of a sportsman with a job that I love.
And sure I am not the only one.
I was blue belt vicechampion in 2008 Worlds, purple belt bronze medalist in 2009 Europeans, multiple times Croatian champion in blue, purple, brown.

2. How did you hear about BJJ and how did you start training? 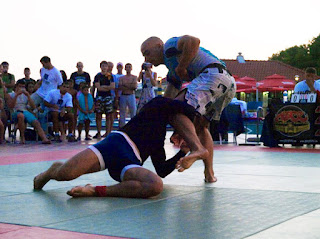 One day in college during class breaks I saw two guys that were wrestling in some stupid uniforms at the college gym (Carlitos and Plichta).
I asked them to give me one round with each of them to smash them with my TV gained skills. The result was: one of them choked me with his chest and other one switched few armbars at will until I
finally tapped. I didn’t know what exactly just happened but I was hooked instantly and then went to college jiu-jitsu trainings that they were attending the next day.
You could take jiu-jitsu trainings in college instead of regular sports classes – great! The great thing was that we all together shared college classes in the morning and trained BJJ to late in the evening.
..then the PRIDE and UFC tournaments started to rise to mainstream, then came Mirko Filipovic with his MMA career and all of a sudden everybody wanted to train BJJ.

3. You are a frequent competitor. What is it about competition that you like so much?

I like to set goals. That makes trainings interesting and makes me a better fighter. The final step is representing your team and country in competition – that’s a priviledge.
Competitions have a rush of emotions that you must control and competition fights are largely a mindgame. There you must use all of your skills in the right moment. That are the things I like!

4. You won a silver medal in the IBJJF Worlds as a blue belt. Please tell us about that tournament. How did your fights go.

The division was stacked. I think I had like 6-7 fights until the finals. In the final fight I fought Lucas Rocha for my second time, a Brazilian champion from Ze Radiola’s team who had already beat me the same year in the Europeans final, so it was my chance for “revenge”. Eventually he won in a very even and for me grueling match with all Gracie Barra guys cheering for him, and our guys from Croatia with the whole Alliance team cheering for me during the whole match. The next year he beat me once again, in the Europeans semis at purple ha ha, but this year at brown I’ll have my fourth luck with him..

5. Will you compete in this year’s worlds?

Yes, for the first time in brown.

6. A few years ago, you had injured your knee and were out for a long time. How did your rehab go, and how were you able to come back to your best level?

I think most of injuries are somewhat reflection of your mindset that moment. In that training session, my head just wasn’t in the right place and during the judo sparring I fell with my partner on top
and tore the ACL in knee along with two other ligaments. The recovery after that injury was really hard and years before, for most athletes, that would be a career ending injury. Today, medicine techniques
improoved alot and I came back to full trainings and competitions a year later. You must put a lot of effort in rehab process, be patient and have your head in the right place to get back to 100%.
You definetly learn alot about your yourself, your body and ways of training after something like that..
However, watching your teamates roll on the mat and compete is the hardest thing ha ha. Thanks to God and good team of doctors the knee is now all good!

7.Who are your favorite BJJ players and why?

First of all – Marcelinho Garcia for his creation and simplicity and Jacare for his attractive and uncompromising style. I like smooth killers like Serginho, Xande and Rodolfo also.

8. Where do you see yourself and your bjj career in 5 years time?

I see myself rolling on mats on a Dalmatian island (Croatia) till evening and drinking beer the rest of the day.

9. Please say one word to describe the following people:

10. How would you describe your BJJ game (your style)

11. Matko are there any sponsors or friends you would like to Thank?

I would like to thank all my trainers and teammates in the gym.

12. Thanks Matko, all the best

Thank you for the interview! Greetings to BJJEE!