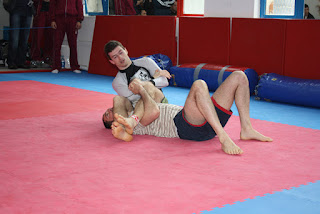 1. Djordje can you please introduce yourself to the Eastern European
BJJ community?

Hi, my name is Djordje Kesić and I’m a purple belt under Rodrigo Carvalho, Akxe BJJ.
I train at Fight Club Gepard, Ljubljana. Currently we’re training without a real BJJ
instructor, because Rodrigo left for US about a year ago, so we formed our own team called
UFK Rupa. I have a great group of guys around me, not that big in number (there’s about 15
people on average in class) but still, we train as hard as we can.I’m still a student, I study at college of computer and information science, Ljubljana – actually I only have my thesis left to finish :), so hopefully I’ll have more time for BJJ when I’m done with all the college obligations.As for BJJ accomplishments, I haven’t achieved that much in BJJ – I won some smaller tournaments in Slovenia, won the nogi croatian open 2010 and placed 3rd in advanced divison at croatian open 2010. 2011 was a very bad year for me, I had alot of injuries so I don’t think I competed at all. The main goal for this year was just to compete as much as possible and acquire valuable experience. Since returning to the mats, I think I won every tournament that I participated in… the Slovenian open, Croatian league (1st tournament out of 4), Croatian nogi 2012 and now the Croatian open 2012. Hopefully I’ll keep up the winning streak.

2. How did you hear about BJJ and how did you start training? 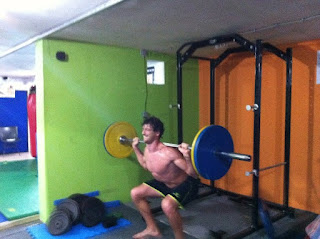 Probably as most of the kids at that time – we watched alot of UFC and Pride fights and when I saw Minotauro submitting crocop with an armbar, I knew that was something I had to try out. I remember rolling around with a good friend of mine, Mare, whenever there was a chance, you know some old tatami at some gym or whatever 🙂 Couple of months later I enrolled in a BJJ academy, fell in love with the sport and the rest is history 🙂

3. Please tell us about your BJJ academy

Like I said before, we’re just a small group of guys, learning the art mostly by ourselves. We only have two purple belts (me included), about ten blue belts and the rest of the guys are white belts, so no fancy belt rankings here yet :))) The academy is called Fight Club Gepard and is located in Crnuce, Ljubljana. Basically I’m in charge of leading the trainings and I also try to train with the guys as much as possible – although sometimes it’s very hard to find the right balance between teaching and training, as alot of new people come to the gym and want to try out BJJ. Everybody is welcome to stop by and train here with us.

4. How would you describe your BJJ game (style)

Huh, good question 🙂 I think my style is very open. I have very long legs and I’m pretty flexible, so I try to use that to my advantage. My favourite techniques are inverted half guard (tornado guard), x guard, and sweeps from butterfly guard. I do that alot. My takedowns are very average (at most, lol), so I rely very much on my bottom game, where I try to submit or at least sweep and then work for a submission from the top. I always look for the finish and I feel very dissapointed whenever I go to a decision.

5.How is the BJJ scene in Slovenia and how do you see it progressing?

The BJJ scene in Slovenia is evolving – slowly but surely… We don’t have that much academies as our neighboor countries, but we do have some young talents here and quality competitors like Janezic, Flis, Jurisic, Perhavac, Erzen and so on… For now there are just tree bigger academies – Alliance Red Eagle, Gracie Barra and us. Last december, Carlos Maia and his team from Gracie Barra organized the first Slovenian Open and there’s also first International NoGi Open, with money prizes, scheduled for the end of may. Quantity wise, we’re still far behind, but quality wise, I think we are pretty competitive with the rest.

6. Where do you plan on competing this year? 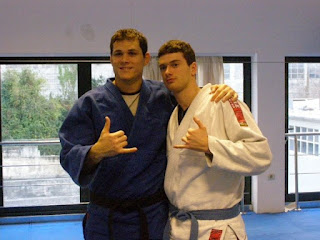 I’ll try to compete as much as possible. That includes Croatian league matches, Serbian Open and for sure some local tournaments here in Slovenia. Then at the end of the year I’ll be preparing for the Europeans…

7.Who are your favorite BJJ players and why?

Huh, I like alot of them – Cobrinha, Marcelo Garcia, Rodolfo, Galvao, Mendes brothers, Caio Terra, Braulio Estima… But my favourite is definitely Cobrinha. I like his style very much, he has a killer guard and attacks from every position. Out of all, I try to mimic him the most :)))

8. Where do you see yourself and your bjj career in 5 years time?

I see myself as being 32… lol, nevermind :)) Back to the question, didn’t think about it too much actually. I’m going to try to train hard, eat healthy, get better every day, compete in bigger tournaments and hopefully the results will speak for themselves. Ohh, and be promoted to brown belt at least :)))

9.Are there any sponsors or friends you would like to Thank?

Big thanks to Rupa Underground. I’d also like to thank my team and all the guys from UFK Rupa. Special thanks goes to my friends for the support at the tournaments – Luka, Suzi, Mare, Boro, Enis, Sara, Mirko… hope I didn’t forget anyone:) Oh… and last but not least – big thanks to ‘DEDA JACARE’,
HAHA 🙂

10. Thanks Djordje, all the best

Thank you, for giving me the opportunity to present myself. BJJ Eastern Europe is an interesting site, keep up the good work guys!