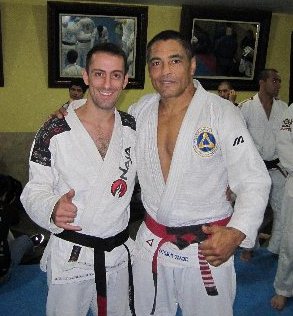 Mike Mrkulć is what you can call a BJJ prodigy. He received his BJJ brown belt in 3 1/2 years. In 2005 Mike entered the World Brazilian Jiu Jitsu championships at adult and won the Bronze medal in Rio de Janeiro. He received his black belt from Living Legend Royler Gracie and Professor Lou Vintaloro the next day on his birthday. In this exclusive interview with BJJ Eastern Europe Mike talks about how he left his job as a stockbroker to dedicate himself to BJJ, His experience at the Mundials, and his Montenegrin origins:

Hi Mike, can you please introduce yourself to the BJJ Community of Eastern Europe?

My name is Mike Mrkulic, I’m 41 years old and hold the rank of 2nd degree Black Belt under the Gracie Humaita/Fredson Alves 4th degree Black Belt (Saulo Ribeiro family) Im from the United States, born in the boogey down Bronx, NY. I currently hail in the glorious state of New Jersey. My academy is located in Montclair, NJ. I started training and competing in 1999.
My main titles are winning around 10 North American Grappling Championships (NAGA), 10 Grapplers Quest tournaments. As a purple belt I fought in the 2003 Abu Dhabi World Championships.
I’ve won the Bronze medal at the IBJJF Pan Ams Purple belt adult featherweight (pluma) division.
But my proudest acheivement was winning the Bronze medal at the IBJJF Mundials in the Brown Belt adult featherweight division back when it was still being held in Rio de Janeiro in 2005. It was cool because their were like 50 guys in my division, and all of them were like 18, 19 barely over 20 years old. They were all like these ripped gremlins, and here comes 35 year old Mike from New Jersey determined to become Mundial champion. I had 5 fights, no one scored points on me, I lost the last match by 2 advantages. I received my Black belt in 6 years from Royler Gracie and my Instructor Louis Vintaloro (Royler Black Belt) at the legendary Gracie Humaita Academy in Rio de Janeiro, Brazil. 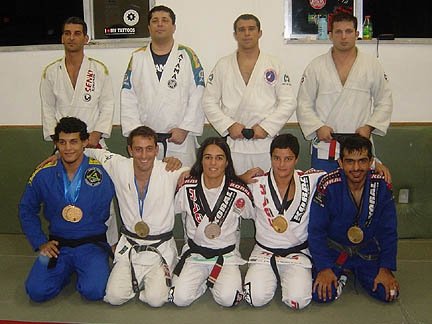 At the time I was a stockbroker on Wall Street for 9 years. I was investing and trading client money and risking all of my own money in growth companies in the equity markets. You win a million you lose a million, that’s how the story goes. After September 11th, the stock markets changed forever. I had a feeling that you could stick a fork in it because the biggest bull market in history was effectively over, done. I was a blue belt successfully competing all over the country and came to a cross road in my life. I realized life isn’t just about money or some yuppie lifestyle, it’s about the quality of your life. I got promoted to purple belt and decided to open up a school. I wanted to live a different life, a new life all together, a Jiu-Jitsu lifestyle.

Please tell us about how you were able to progress so fast in BJJ. Was it all about total immersion in the art?

I fell in love with the art. The moment I walked into the school to try a class, I knew it was for me. Jiu-Jitsu was the answer to all my problems, mentally, physically & spiritually. Man, I thought about it all the time. I had a deep down burning desire to become a high level Jiu-Jitsu fighter, a professional grappler. I wanted it so bad I could taste it. I was competing because I loved winning and getting my hand raised. At the time, recognition by my grappling peers and the grappling community was very important to me. I felt like I needed to prove it to myself, my instructor and to everyone else. You could say I had an ego. My routine was compulsive to say the least. I would go to class every single day, seven days a week until physically I dropped from exhaustion. Then I had no choice but to rest for a day or 2. When I wasn’t there training, I was anxious that others were getting better. I would toss and turn at night thinking about it, if not practically crying about it. When I wasn’t training, I would be popping VHS tapes in my VCR and watch Black belt Jiu-Jitsu competitions for hours. I would drool at their technique and visualize myself as one of them one day. I would practice yoga because Rickson said it complimented our game. Man, now that I think about it, back then, I was a BIG Jiu-Jitsu junkie ha ha.

Please tell us about your Montenegrin Origins. Do you ever plan to do some something with BJJ in Montenegro?

My parents are from a little village in Montenegro called “Gusinje”. Population of 10,000 people. They emigrated to the U.S. in 1971. As a kid I’d spend my summers in the former Yugoslavia. In 1984 my father decided to move the family and we lived there for a year. The Olympics were in Sarajevo that particular year. It was trippy going to school there. I learned how to read and write cyrilic. It was interesting watching teachers beat the crap out of students. We moved back to the U.S. after a year. Then war broke out a few years later and we stopped going. Perhaps in retirement, I’d teach Jiu-Jitsu out there, that would be cool. 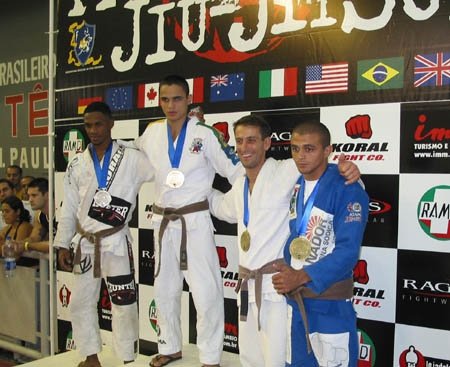 Please tell us about your academy and your team.

What can I tell you, I truly am blessed to have such amazing people that share the same love that I have for the art. I am grateful that they give me an opportunity to enrich their lives with Brazilian Jiu-Jitsu. We look out for one another and help each other, especially new students. We pay attention to the technique and not so much about the “I need to smash this person” attitude. Competition is different! But on the mat, at the school, we need to be conscious & pull back when we feel the egotistical caveman wanting to come out of us. Our school focuses mainly on Sport Jiu-Jitsu and Self defense techniques. Besides teaching various law enforcement agencies, I’ve worked with the FBI, DEA and also did some consulting for the Secret Service. We currently certify the Federal Reserve Banks-Law Enforcement Unit in ground fighting & edged weapons defenses. We’ve produced 2 IBJJF World Champions & Pan Am medalists, but I don’t want our school to be only a competition school. Jiu-Jitsu is for everybody.

How would you describe your game and what are BJJ players that you admire?

I’m a small guy. I started Jiu-Jitsu at 152 lbs. I got all the way down to 134 for competitions. I hover around 144 now. I like to consider myself well rounded from top to bottom. I have a deep appreciation for the basics. I love de la riva, spider, butterfly, sitting guard all the way down to deep half guard and all the submissions including leg attacks that come along with it. I love capitalizing on sweeps and reversals when the opportunity presents itself. I am a strong believer in gaining a dominating position first, then going for the finish. I don’t believe in just going for the submission from just anywhere all the time. There are many BJJ players I admire, but Rickson is the man. I was fortunate to learn from him in Copacabana in 2010. 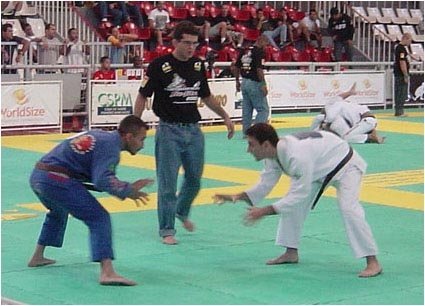 Mike at the Mundials in Rio

For me? Continue to enjoy life to the fullest. Besides Martial Arts, I love other arts like music, theatre etc. I was singing in a Rock band for a few years. Im currently having fun acting in Nyc, I did my first commercial recently. I also did a clown workshop that was so much fun! I enjoy expanding the school. The team enjoys learning, competing and getting to higher levels of Jiu-Jitsu mastery.

Well, it’s not really a sponsor but, I’d like to thank the “Estonian” for breaking my heart recently. Your gonna get yours one day biz natch .

Thanks Mike and all the best!