BJJ Black Belt Leonardo Neves, talks to us about his academies in Sweden, Turkey, Croatia and Serbia. 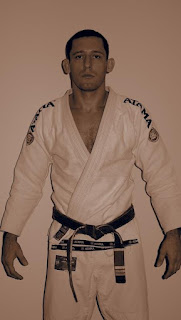 1. Hi Leo, can you please introduce yourself to our readers?

First I want to thank you for the invitation of the interview and for this initiative in creating a site for the eastern part of Europe. Well I was born in 1979 in Sao Paulo, Brazil. My life in sports began early, due to a problem of asthma that was diagnosed when I was a child. When I was 14 years old my friend Fernando called me to do a jiu jitsu training where he used to train. My passion for jiu jitsu started from that first practice. Since then I never stopped training.
I started training with Leo Negao, a Black Belt from Professor Fabio Gurgel. At that time Leo Negao was still a purple belt but one of the best fighters in Sao Paulo. When I entered the University of Marketing and Advertising I had the opportunity to train with Professor Barbosinha, which at that time was the head coach for the university’s team.
Leo Negao was a member of Team Alliance so all weekends we trained at Alliance headquarter in Sao Paulo. At that time the team was composed of great fighters such as Fabio Gurgel, Leonardo Vieira, Fernando Terere, Ricardo Vieira, Eduardo Jamelão, Telles, Demian Maia, Leo Negao, Tarsis Humphreys and many others. Out of my team, I had the opportunity to train with other great athletes because they also were part of the team of my university, such as Fabio Leopoldo, Fernando Margarida and others.

When I left university I went to live in Fourt Lauderdale in the United States. There I had the opportunity to train and live with Edson Diniz, Rodrigo Minotauro, Wilson Gouveia and Hermes Franca.
Actually as a fighter I did not have the opportunity to win big titles in my sporting life due to my interest in being a teacher and not a fighter. I believe that my vocation is teaching jiu jtsu. As fighter I achieved few titles that I won during those 20 years practicing and studying jiu jitsu.

2.Please tell us how you ended up living in Sweden, and tell us about the BJJ scene there?

I went to Sweden because my former trainer Leo Negao made invited me.He had signed a contract with gym in Italy and he did not want to leave the academy in Malmo in Sweden without any teacher replacing him. Rodrigo Minotauro no longer wanted to stay in the U.S. and the academy in Four Lauderdale was already not good for training. It was then that I decided to accept the invitation of Leo Negao.
Sweden in my opinion has one of the best jiu jitsu players in Europe. In Sweden you will find a bunch of Brazilian Jiu jitsu instructors. Swedes are very dedicated and they really love martial arts.

3. Who are your most successful students (competition wise)?

They are many students who are standing out for all these years. I can mention a few such as Daniel Holm, Vedran Ikic, Damir Salina, Aleksandar Milicevic, Ibrahim Inal, Ali Al Rubiaai, Johannes Andersson, Eren Anlar, Matthias Schiemman, Andres Taylor, Andre Mineus, Jurica Zanic Domagoj Pavin, Nikola Moraca, Lucija Pavin…They are so many. In 2009 we won an award as best team in Sweden!

4. You also have some affiliated academies in Croatia, Serbia and now Turkey, please tell us more about these academies and their instructors.

Well, in all those years here in Europe, my biggest concern is to share together with my students and instructors as much knowledge as possible. Thank God people believe in my work and knowledge and now our team is spread across four countries in Europe. Today you can find a gym affiliated to Team Neves: In Sweden, in the cities of Lund, Malmo and Skelleftea / In Croatia, in the cities of Zadar, Osijek and Donji Miholjac / In Serbia in the cities of Beograd and Kula / and now in Turkey in the cities of Istanbul and Ankara. For more information about training please visit our website on the Internet www.nevesbjj.com

We have a lot of plans for this year. I just opened a new gym in Istanbul and my focus is making this gym the best training center for fighters in Istanbul. This year we will organize two large camps for all jiu jitsu practitioners in Europe. We will continue training hard and together for the local and international championships. And as priority number one is to give all possible assistance to my students and affiliated academies.

Once again, thank you all for the opportunity and please feel free to contact me if you would to train in one of our academies. Ossssss