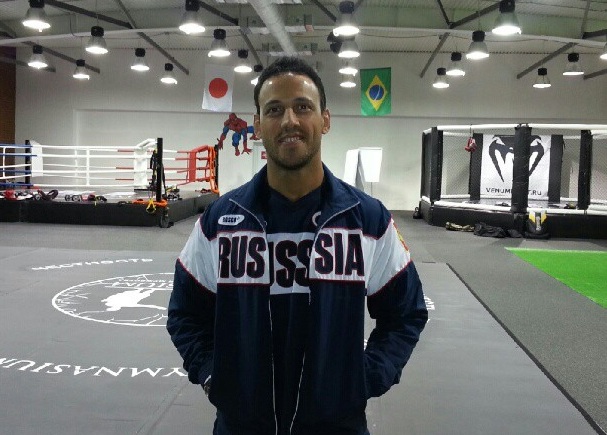 1. Hi Deda can you please introduce yourself to our readers?

My name is Alexander Faria, also known as Deda Faria. I’m Brazilian, 39 years old and came to live in Russia in September

of these year. I started practicing Brazilian Jiu-Jitsu in Aracaju,Brazil, almost 20 years ago. My master, Eduardo Hernandes was from a team called Strauch, Rio de Janeiro, but in 2001 we moved to Alliance team under Alexandre (Gigi) Paiva. From that time on until my coming to Russia I was part of Alliance team and had several chances to train in the gym in Rio or participate in seminars. So, my sensei was Eduardo Hernandes and our Master was Gigi, who gives an excellent support to his affiliates. All I know, I owe to these guys and the teams Strauch and Alliance which I will always respect.
I have 6 state tittles, some tittles in local championships and cups, a 3rd place in a world championship (Confederação Brasileira de Jiu-Jitsu Esportivo) and a Pan american tittle by the same federation. Not bad for someone who never lived of it until now and never prepared properly for any competition. We are talking about fighting in Brazil, where the best competitors are always competing.

2. Please guide us through your journey in Jiu-Jitsu until the point you came to Russia.

All my life, BJJ was like a hobby for me, my sport and therapy. But it was something that I loved and always took seriously. As I worked on marketing business and presented a TV show (yes, I was a TV presenter), so, I traveled a lot and I couldn’t take part in all championships, but I did what I could. Even not having the time to prepare like a professional, I tried to do my best in competitions and got some good results, comparing to those who lived of BJJ. In february 2012, Gigi called me and asked me if i wanted to come to Moscow,Russia to coach in Alliance here for a 3 month period. At first, I thought it wouldn’t be possible because of my work. Too much time to be absent. But talking to my family I decided to give it a try and check it out. It would be something like paid vocation.
It was a great experience. I had a great support from the team, the training was awesome, and it was nice to see BJJ in a different way, because here almost everybody has some background, coming from Sambo, Judo or wrestling. I learned how committed the russian athletes are and I learned to respect them even more. I knew little about Sambo for instance, but even coaching BJJ my respect for these others modalities increased.

3. How did you end up in Russia teaching BJJ in Moscow?

During the 3 month period in Moscow, I was invited by a private student I met here (Yun Gleb) to take part in a project of educating children making use of martial arts. He wanted me to coach BJJ in the gym and also help with my skills in marketing and business, once it had been part of my academic life. I studied the project and saw good possibilities for the idea, and also a nice potential for the growth of BJJ in Russia. So I came back to Brazil after the end of the contract with Alliance and we kept talking. After deciding to go for the project I took 40 days to put my life in order. It was a hell of a change for me and my family. My family will come to Moscow later, within a few months. I quit a life in Brazil and arrived in september in Moscow. As I knew it could be bad for the guys I met here to open another Alliance affiliate, or maybe some people might not like it, I decided to leave the team and start my own, which we named LUDUS BJJ RUSSIA. Since then we have BJJ for children, along with boxing, some private students and an adult group at night in our gym (www.gymnasium.su). We also opened a dojo downtown, for those who can’t commute and also want to train with us.

4. Please tell us more about your academy in Moscow and about your students?

Our Gym is called Gymnasium (www.gymnasium.su). It has great facilities and excellent professionals. It’s a real martial arts training center in one of the best areas of the city, Rublevka, a suburb of Moscow. We count on Medical support all day, Physical preparation, boxing and BJJ classes. The facilities are first class and the good thing is that here I can count on whatever exists to prepare an athlete to high level competitions. Our students usually live nearby, so they have a good income level and don’t fit the competitor’s profile. That’s why we decided to open a dojo downtown, so that those who live there and wanted to be part of the team had an option of place where to train. So it’s easy to notice that when coaching downtown we can feel more interest in fighting and competing while some guys in our main gym also think about physical conditioning and getting fit.

5. Can we expect to see your students competing in the big European and world tournaments?

We already have a calendar that includes the European and a project for competitions. Lots of children are going to take part and some adults. I have a very good brown belt, a purple belt and some blue who migrated from other teams after I arrived. I’m sure they are future champions. I also intend to get part on these competitions, now that I have a proper preparation and could take care of a very serious hurt in my back (heritage from my rolls with tough good russian guys in the summer). We are planning, but, without much expectations, because it’s too little time to work a group from the end of september on. But as we say in Brazil; the worst you can get is experience…

6. Tell us more about your life in Russia. How do you find Moscow, the people, the culture?

Basically I think of BJJ all day. I’m responsible for the preparation and supervision of classes that are coached by two of my best students; Daud Adaev(Brown) and Slava Ilin (white BJJ but master of Sambo). The language is still a barrier cause I coach in English and am still learning(very slowly) russian, so I just participate in backstage with the kids, but I know them all, try to interact, and help as I can. The adults group is all with me. Daud also alternates coaching with me downtown cause we also have functional training for competitions.
I have made many friends and I must say that it is a bit different from friendship in Brazil. I can’t explain, you must live it. Its more intense, like a war brother, I don’t know. I loved the cities I visited, full of history and culture. I went to several museums and galleries and understood where the fighting spirit that is in every russian comes from. Something admirable.
Everyday I learn something new. Not only about the language, but also about habits and behaviors that are different from my country. It’s difficult but totally possible to adapt if you really want it.

7. How do you see BJJ growing in Russia in the next few years?

I’m sure that within a few years Russia will be a great barn of BJJ fighters. Also, it’s a matter of time until the first black belts are formed from white to black here( which normally takes more then a decade in Brazil). Sometimes we travel to a country and we find guys that are tough, but didn’t have the proper formation, getting his belts randomly and from different senseis that don’t even know them but are interested in an affiliate. I’m sure these black belts from the future and other brazilians that are here or will come after me will start spreading the BJJ around, and it will happen the same it happened everywhere this process started. It will take over.

8. Do you have good relations with the other BJJ schools like Leonid Gatovskiy and Kristian Cestaro?

I don’t know Leonid (Gracie Barra) as a person, just heard of him, but as a sensei, what I know is that he has done a nice job, cause I met and trained with lots of his graduates and they have a good level, are really tough.
I met kristian Cestaro a little time ago when I was organizing an event with different brazilian blackbelts, and it was a great surprise to see such a big man with a heart that doesn’t fit in him. He has a history of great results in championships and has been here for more time than me. So, it’s good to hear his experience. His students love him, what shows the kind of master he is. We coached a seminar together and our students interacted respectfully. Our idea was to show that BJJ is for everyone, and the competition must be healthy and in the fighting area, only. So, we are always in touch, and in the future we intend to work together when possible.

9. Please tell us about the series of seminars that you conducted throughout Russia With Marcus Vinicius and Kristian Cestaro.

Actually, Marcus was around russia giving seminars in 11 cities. When I went to a Championship in Ribynski, with only 4 children and an adult after only 2 weeks of work, I did not expect to meet him. Two weeks after, he payed me a visit in Moscow and I had the idea of these seminar with 3 brazilian black belts; Me(Ludus Team), Cestaro (Kristian Cestaro Team) and Marcus Vinicius(Beverly Hills BJJ). They loved the idea and it was a great event, with each one of us showing techniques and helping the students in a huge dojo. It was a great day for BJJ in russia for sure.

Well, even with the little time for preparation, we are still knowing each other, the team and me. We are organizing ourselves for good trainings and I know we will have some good results as consequence.
So far the idea is to train hard, with quality and take part in as many competitions as possible, even with few athletes if its an international trip, for instance. Although we have more than 100 students, counting on kids and adults in both dojos, we know that 2 month work is very little time to measure anything. But by experience, I can say that I’m coaching champions already. They just don’t know it. I do.

11. Thank you for taking time to answer our questions. All the best. OSSS!

I am the one who thanks you guys for the chance of speaking about our work in LUDUS TEAM. I do hope that BJJ Eastern Europe continues spreading this incredible martial art like you’ve been doing and keep helping BJJ development in Europe and in the world.
Thanks and OSSS!!!

Deda showing a technique for the Russian audience