A Brazilian who brought BJJ to Albania, Paulo Rigon: “You tap countless times, get frustrated a thousand times but you never give up.”

1.Paulo, you are Brazilian, lived in the states, and now live in Albania where you teach BJJ. How on earth did that happen?

My wife is Albanian and she always described her country as a great place, where people enjoyed life. After coming here a few times myself I understood what she was talking about. It truly is a great place with friendly people and like you said, been a Brazilian who also lived in Italy and in the States, it was not a hard decision to call Albania home.

Even though I’m Brazilian, as hard as may sound to some, I had not heard of BJJ back in Brazil. Back then, BJJ was very famous in Rio de Janeiro, but not in the rest of Brazil, so I ended up training Tae Kwon Do.
About 9 years ago, while leaving in the States, I was reading a magazine about BJJ and came across a Royce Gracie Academy ad. I could not believe that Royce had a network school in the city I was living in (Jacksonville, FL). I was so happy that I went to the school the very same day. Royce was not the head instructor (it was a network) but he would come often for seminars and a week after I was training BJJ, he was in town for a seminar. The experience was so wonderful that I got hooked by BJJ and never stopped training since.
My BJJ journey has been a fun and exciting ride. Like everyone else, I first believed that my “power” would easily overcome anyone, and like everyone else, I found out that I was mistaken. I tapped COUNTLESS times, got frustrated thousand times but I never gave up. The best of all, BJJ become my “lifestyle”. I made great friends and I now understand the meaning of “brotherhood”. I’m still learning every day, but today I can say that I understand Brazilian Jiu-Jitsu.
I had the great honor to train with some world champions like Master Rigan Machado, Marcelo Garcia, Wanderlei Silva and of course, Master Luiz Palhares .
I was also lucky to have great training partners that helped me bring my Jiu-Jitsu to another level.

3. How was it training under such a distinguished master like Luiz Palhares (coral belt under Master Rickson Gracie)?

A friend of mine that also trains BJJ and today is a black belt, invited Master Luiz Palhares to come to Jacksonville for a visit. Master Luiz Palhares came and decided to move to Jacksonville a few weeks later and opened his first school there. It was an opportunity that not many people have until this day, to train with a world and Brazilian champion, 6th degree black belt-at that time) and a great human being.
I’ve been training with Master Luiz since and I am very thankful for the opportunity to learn from such a great instructor that has been training with the Gracie family for the last 35 years and is today a 7th Degree Red and Black Belt under Rickson Gracie.
When he teaches, you can clearly see the difference with details, reasons why we should do this and not do that. He is very patient with every student (from a first day white belt to a seasoned black belt).
Every now and then during class I would think to myself: What a great honor having Master Luiz as my instructor and my kids instructor as well (I have a son and a daughter that also practice BJJ).

4. Please tell how you opened your bjj school in Tirana and how is the bjj scene in Albania? 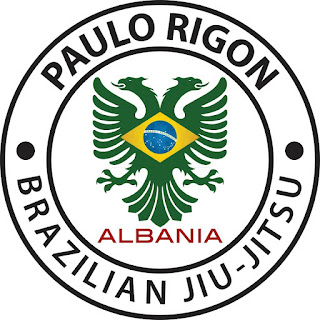 Since the first time I came to visit, I always wanted a place to train but It did not took long for me to realize that Brazilian Jiu-Jitsu was unknown in Albania (with exception of few of my students that lived overseas and had the opportunity to train in the country they were living in).
In 2010, I came with my family to see how we all would react to the idea of making here our home. In that period, I met a Tae Kwon Do instructor that became my friend and offered me his academy so I could teach BJJ. That summer I had about 12 guys training with me and everyone always expressed their happiness for finally having the chance to practice BJJ in Albania so when we decided to move here, I knew that I would open a school and today I’m proud to say that we are the first and only BJJ school in Albania recognized by the International Brazilian Jiu-Jitsu Federation. It will take some time until we’re able to spread the art in the whole country, but I’m honored to have started this mission and will do everything I can to make the sport well known in Albania.

5. Please tell us more about life in Albania, as it’s a part of the world that is not very visited, but very interesting.

Albania reminds me of Brazil, with mountains, rivers, lakes and warm, friendly people. I had no idea how beautiful the country is. I met some Albanians in the States that left the country many years ago, after communism ended but they only had bad memories about the country, so for me I had to believe them and was skeptical about coming here the first time. I’m glad I came, I’m glad I made the decision to move here.
Albania has a lot to offer and is in the right path to grow and become even a better place. I had a few friends coming to visit, including Master Luiz Palhares and they were all very happy with the time they spent here and soon will be back again.

We are working hard in 2012. Last year, after only a few months of training for all my students, we attended our first tournament in Bulgaria and even with the guys not winning, I was very happy that they made that step, to go and compete so now they don’t have to worry about the “competition arena” anymore and that will help them for future tournaments.
Last year Master Luiz came for a seminar in Albania and soon will be coming again. We’re also bringing some other high level instructors to Albania for seminars and that will also help our students.I would like to give them the experience of training with some of the legends of BJJ.
We are only in the beginning of BJJ in Albania, but I’m confident in my students. Everyone of them have a great desire to learn, to understand more and more the beauty and simplicity of BJJ and that’s what make champions.
I’m also very proud of my kids students. I truly enjoy teaching the young pupils. They are fast learners and they are the future of BJJ, so it gives me even more joy knowing that I can be a small part in they’re Jiu-Jitsu life.

7. How could you describe your bjj style (Guard based, crazy flying techniques, solid fundamentals etc)

Once I asked Royce Gracie: Royce, if you would have to give me ONLY ONE advice, what would that be? The BASICS Paulo. Work the basics. Without that, you will never achieve the “fancy” techniques.
Master Luiz Palhares is also a firmer believer that BASICS is the best way to go so needles to say that the solid fundamentals is how I would describe my BJJ style and try to pass it on to my students.

8. Thanks for spending time to answer these questions!

Thank you for inviting me for this interview. Is always a pleasure spread our art and what you are doing is a fantastic job. Keep up the great work and hope to have the chance to train with you one day brother.