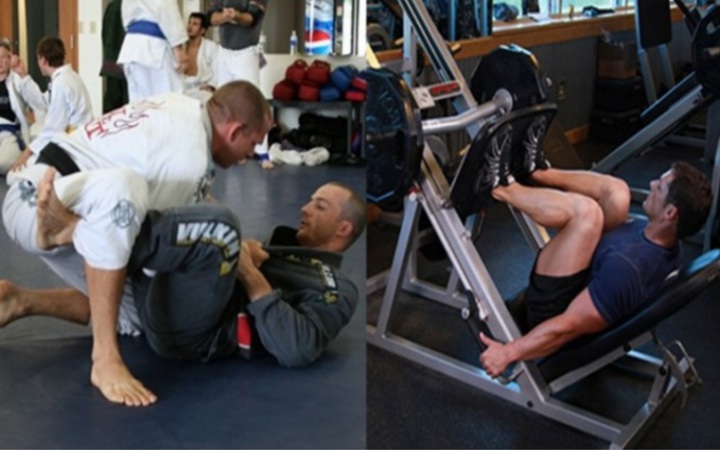 Brazilian Jiu-Jitsu (BJJ) is a multidimensional sport. The activity demands a high level of strength, power, endurance, and flexibility.

This has led to a rise in certain training practices by many BJJ athletes. Weight training, plyometrics, running, and calisthenics are all becoming staples of training.

Injuries are always going to happen if you train in Jiu-Jitsu. Once you get injured you need to be patient and work hard on strengthening the part of your body where the injury happened.

As BJJ athletes we must learn to accept that strength training is useful in the sense that it gives us a stronger armor to cope with all the bumps and bruises of hard training. If you look at a sport like rugby, almost all the athletes follow a rigorous strength training program so that they can survive the many concussions and heavy tackles that they receive in such a rough sport.

In this article, from sciencedaily.com, University of Florida researchers studying football injuries at more than a dozen high schools found that athletes that follow a contrrolled strength training program are less likely to get injured:

MaryBeth Horodyski, an assistant professor with UF’s department of exercise and sports sciences, said a three-year study of athlete injuries shows that players who follow a controlled strength-training program reduce their chances of suffering from severe injuries.
Seventy-eight percent of severe injuries to the upper body struck non-lifting athletes, or those students who were not in a controlled weight-lifting program, Horodyski said. And non-lifting athletes accounted for 64 percent of those with severe injuries to the lower body.
“These are very significant numbers,” said Horodyski, director of athletic training education at UF. “The bottom line is, those kids who did strength training typically did not have as severe injuries. They more often had mild or moderate injuries.”

Certified athletic trainers from UF are assigned to 13 high schools in north Central Florida along with physicians from Shands hospital at UF. The study’s data includes 887 injuries to football players over the three-year span, allowing scientists to look at strength training and its effect on injuries. Researchers also examined injury incidence for spring football vs. fall football and other factors relating to sports injuries.
Researchers defined a mild injury as anything that kept a player out of practice or a game for seven days or less. Downtime for a moderate injury was seven to 21 days, and a severe injury kept a player out of action for more that 21 days.

“The take-home message for coaches is, they need to implement a well-structured strength-training program for their players throughout the entire season,” Horodyski said. “It won’t cut down on the total number of injuries, but time loss goes down drastically if the injuries are not severe.”

Horodyski said the number injuries to football players over the three-year period did not surprise scientists. National figures show that 25 to 50 percent of athletes playing football during a given year sustain some sort of injury.
“We have roughly one-third of the players being injured,” she said. “Football is a contact sport, and you would expect a high number of injuries.”

The UF study found defensive linemen are the most frequently injured, and the most common type of injury for all positions is a sprain, Horodyski said.
Much fewer injuries were recorded during spring ball because typically it is not as intense as fall play, so players were exposed to fewer risks. However, Horodyski said they are concerned with the high number of concussions during spring practices. “We don’t know why this is,” she said. “It could be that new kids are trying to get on the team, and more head injuries occur when you have less-experienced players on the field.”
Keith Meister, an assistant professor with the department of orthopedics at Shands and a UF team physician, said football injuries follow a cyclical trend.

“One year we’ll see only one knee injury, while the next we’ll have several,” said Meister, who oversees residents from Shands’ departments of orthopedics and family practice medicine who are contracted out to area high schools for all football games. “Conditioning and coaching are the two biggest factors we have seen that affect injuries.”
Jay Godwin, head football coach at Buchholz High School in Gainesville, said the availability of athletic trainers and physicians during games and practices translates to fast and accurate diagnosis when an injury does happen.
“Strength training has become a big component in rehabilitation of injured players and in preventing injuries,” Godwin said. “It seems the added emphasis on continuing weight workouts has made an impact.”