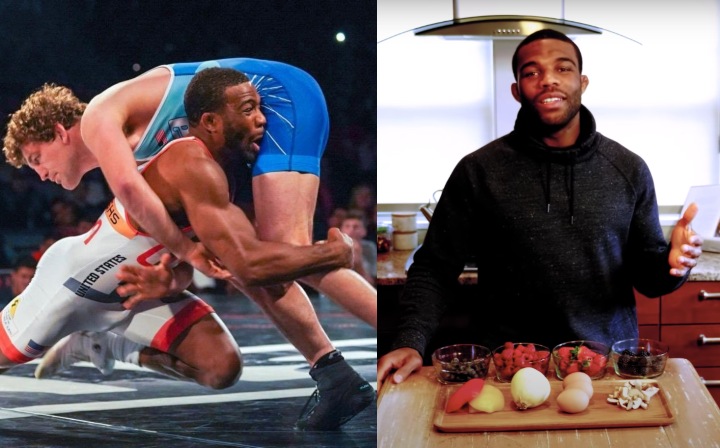 Turning yourself into the best possible grappler is no easy feat by any standard. There are the countless early mornings, thousands upon thousands of repetitions and who knows how many rolling/sparring sessions; weight and bodyweight training, prehab work, cardio work, attentions to details, dealing with injuries… One of the things which, amidst others, matter greatly – although not directly connected to training – is your nutrition as well.
This is true for both professional and amateur athletes alike. However, the former often know way more about structuring their diets than the latter; in the end of ends, their careers depend on it!

Jordan Burroughs, a 4x World Champion and Olympic Gold Medalist in Freestyle Wrestling, understands the importance of fueling himself right. This is what he eats in a day!

Jordan starts off by saying that he typically stays around 7-8 pounds above his weight class (163 pounds). Therefore, he has to make sure that everything he takes into his body will be beneficial for his performance.
It’s in-between one to two hours before his morning training sessions that he likes to eat his breakfast. The reason, Jordan explains, he eats somewhere in this time period is because he, personally, doesn’t like to be either too full nor empty before training. Instead, he wants to have his body in a „relatively hungry“ state. In different words, his goal is to acquire the nutrients he needs while still being able to perform at a high level.

So, Jordan’s breakfast is simple – and fast – enough; he gets his day going with a smoothie! He makes it out of a mix of a handful of organic spinach, some almond milk, an avocado – which is rich in healthy fats, chia and flax seeds for solid fiber and omega fatty acids intake; as well as with tumeric, a great anti inflammatory addition. Then, he’ll add peanut butter for texture and flavor and some plant-based protein in order to make sure that he’s getting enough protein into his system.
He finishes off with some ice cubes, blends everything, drinks it and is now properly fueled for training!

After the training session is done for, it’s necessary to supply yourself with quality nutrients so that your muscles can recover and grow; so that they can become ready for the next training session at full power!

Jordan understands that and so, for his lunch, he gets adequate protein sources; but fruit as well, for he wants the anti-oxidants to help his body’s recovery and the sugar to help his muscles be prepared for the next training cycle.
One meal that he likes to prepare is a veggie omelette. To make it, he takes three organic eggs, some mushrooms, onions and peppers. Of course, he doesn’t forget about his fruit either! He makes a fruit salad out of a great range of berries: blueberries, strawberries, raspberries and blackberries.

Jordan wants the viewers to know that he likes being insistent in everything he does; that goes for his meals as well. Namely, he wants to recover at a high level, so that he can perform at a high level. So, after he gets home from evening Wrestling practice, Jordan wants to make sure that he has the right things down in order to recover from a long day.
Therefore, he prepares spinach yet again – however, this time he doesn’t eat it raw but likes to sautee it, as well as his mushrooms. He also eats a sweet potato and salmon; all of which skyrocket his recovery.

Watch Jordan break down his day of eating on the video below: