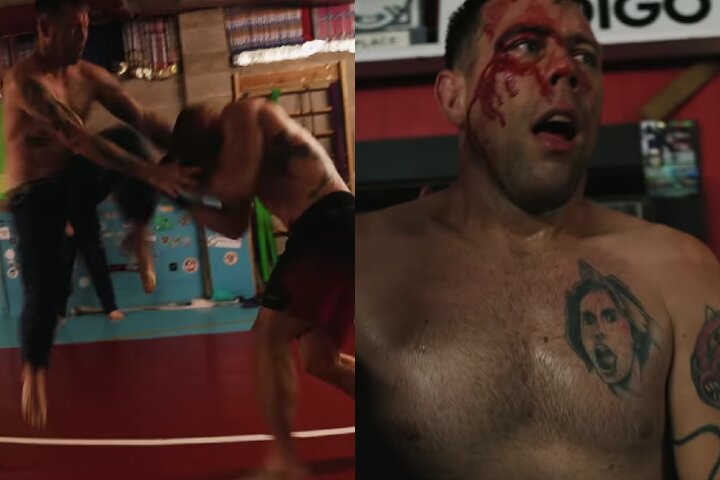 A recent video published by the Daisy Fresh team (Pedigo Submission Fighting) showed two of their athletes squashing beef after a BJJ class. There were punches and knee kicks involved – check it out below (starts at around 41:41 mark):

So what did actually happen before this fight took place at Daisy Fresh? The two men involved in the beef, Jesse Noell and Wesley James Powers, took turns to explain.
Jesse was first to clarify the whole situation:

In wrestling practice, I wanted to shake his hand and then he turned his f*cking back on me. So I went over there and asked: “Yo man, are we or are we not good”, and he said: “It would be in your best interest to steer f*cking clear of me.”
And then here at practice, this f*cking guy is eyeballing me. So I said: “What’s up? Talk to me like a man. I kinda want to smack you in your f*cking mouth right now!” And then he said: “Let’s f*cking do it!”

And that’s that. We fought. I’ve got no beef. My ankle is f*cked.

So yeah, beef with Jesse and I… I lived in his house for a little bit and things didn’t work out there. We had some differences on living together; like cleanliness, habits, and what not. So I ended up being kicked out.
After that, I came here [to Daisy Fresh] with my boys and I was still feeling a little salty about the whole thing. So I refused to shake his hand one time during wrestling class. And then I just kinda snapped on him, faced off him in wrestling.

Then, later that day, he confronted me about it. He was like: “Why didn’t you shake my hand?” And I was basically just trying to brush him off… I was like: “Well, I didn’t wanna shake your hand. I didn’t feel like it.”
And he was going on and on about the issue. He was really driving that thing home… And I was like: “Are you seriously pissed about this? Are you trying to fight me or something?” And he was like: “Yeah, I wanna smack the f*ck out of you!” I was like yeah, whatever, just get away from me.

And then, out of f*cking nowhere – bam! He smacks me across the face while the class is going on. And I’m sitting there, thinking that I gotta f*cking do something about this. Because if I don’t react, he’ll think that he can just hit me.

Surprised by the whole ordeal, Wesley was unsure what to do:

So, I walked up to Heith and told him what happened. I wanted to ask him what to do… Can I beat his a** here, do I gotta go outside? I didn’t know how to handle it.
And Heith was like: “What do you want to do about it?” I said: “Well, right now I wanna f*cking hit him!” And Heith was like: “Well, I can set that up for you.”

At that moment, Heith walked over to Jesse and organized the fight, telling the two that after the class ends, that he would just let them scrap it out.
Tom DeBlass had his opinion about the whole Daisy Fresh situation: