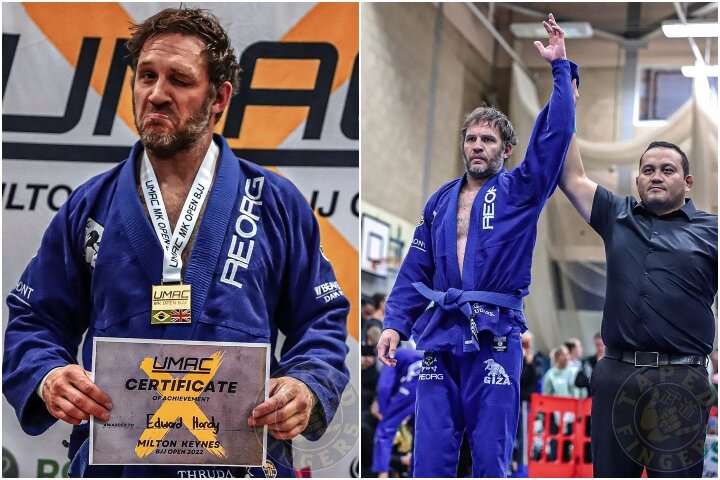 Tom Hardy isn’t playing games when it comes to Brazilian Jiu-Jitsu. The famous actor is a 4-stripe BJJ blue belt and a frequent competitor… Who won yet another gold medal this weekend!

He entered the 2022 Brazilian Jiu-Jitsu Open Championship, held at Oakgrove School (Milton Keynes) on Saturday. The event was organized by the Ultimate Martial Arts Championships, whose spokesman had nothing but words of praise for Hardy:

Tom was a really nice guy. Everyone recognized him but he was very humble and was happy to take time out for people to take photographs with him.
It was a real pleasure to have him compete at our event.

He stormed through his competition and won the finals’ match via Armbar. Here’s what a semi-finals competitor had to say about rolling against Tom Hardy:

I was waiting match-side for the semi-final when Tom showed up. I didn’t know he was going to be there. And they expected me to remain composed [laughs].

I recognized him straightaway. Everyone knows who Tom Hardy is, don’t they? I was shell-shocked.
He said: “Just forget it’s me and do what you would normally do.”

He’s a really strong guy…You wouldn’t think it with him being a celebrity.