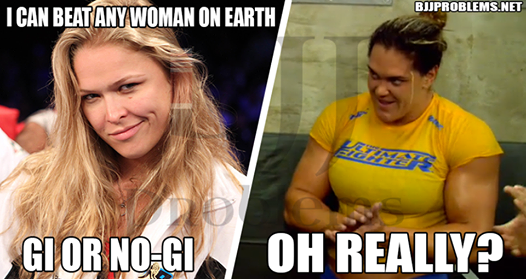 Ronda Rousey had said in a past interview that she can beat any female grappler in gi or no-gi BJJ.

That statement sparked some controversy, and many of the top BJJ women competitors challenged Rousey to a Metamoris type grappling match.

“First of all she is dead wrong. I don’t think she can beat any of the current black belt world champions. The skill level is so high and all she knows is that armlock. She is a great judo fighter, but in a Jiu-Jitsu match all you have to do is pull guard and her judo is done. I’d love to be in a fight with her. Maybe the people at Metamoris would like to promote a match like that. Jiu-Jitsu is much more than an armlock. It’s a lifestyle.”

“I rather believe she didn’t know what she was saying. It’s not possible for someone to display such a lack of humbleness. She disrespected Jiu-Jitsu as a whole. The first quality of a champion is to be humble and to respect others. As my Professior Fabio Gurgel said, I’m ready and at her disposal to fight her under any rules, with or without gi.”

Rousey’s answer as she told BloodyElbow about a potential grappling match with the BJJ champions:

If people want to pay me as much as what I get paid in the UFC to go roll with them, I’d go do that too! But I’ve got movies, I’ve got fights, and I just don’t have the time to put in a grappling training camp. They’re only upset because they think they can beat me, so why shouldn’t I be just as upset at their opinion thinking they could beat me? Why are they so much more entitled to their opinion than mine?