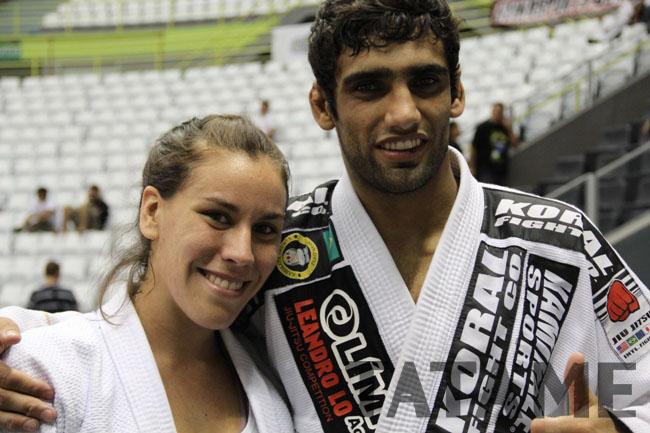 The Tijuca Tennis Club, this weekend, was the seat of the Rio Open. The highlights of this edition were Leandro Lo and Luiza Monteiro . Both fighters won weight and absolute crowning their perfect campaign.

The International Master and Senior was done in parallel, Nova Uniao dominated the major categories, with titles for André Bastos at weight and absolute master, and Andrew Marola, repeating the feat in Senior 1.

Current world welterweight champion, Leandro Lo entered the tournament in search of an unprecedented feat: winning weight and absolute competition in CBJJ. The student of Cicero Costha did not disappoint. Already secured a spot in the absolute final, the black belt, on Sunday (28), faced an opponent taller and heavier than him: Joao Gabriel Rocha . In a tough battle, with him being forced to defend and use all his technique, Lo maintained his advantage of 1-0 to celebrate the title. Hours earlier, he won the midleweight final in explosive clash against Alan Finfou, where he secured the victory with an armbar finish.

“I’ve been wanting for a long time to win the absolute weight of a CBJJ championship and finally got it. I’m happy. I faced a tough opponent. ” He said

Despite the setback in the absolute, Joao Gabriel did not leave empty-handed. The fighter from Soul Fighters, who lives near Tijuca tennis clube, showed his strength in the super heavy division, and with a perfect strategy, won gold by beating Grimaldo Filho, with a submission after two advantages to be zero.

Another highlight of the issue was the first title in the black belt Felipe Pena. The Gracie Barra athlete who recently got promoted to black belt, beat Rodrigo Fajardo in middle-heavyweight. Interestingly, both are from the same academy, but because they are different branches, chose to fight.

If the light heavyweight there was not closing out, you can not say the same for ultra heavy. Friends and fellow GFTeam, Ricardo Evangelista and Igor Silva decided to not fight with the title going to the first. Asked about the reason for the decision, both stated that Evangelista is chasing the ranking and therefore got the medal.

Tijuca saw a very tight duel in the lightweight. The final between AJ Agazarm and Claudio Caloquinha was strained to the end. However, Caloquinha remained ahead with the advantages and won 3 to 2.

Featherweight final was determined by a referee’s decision with no points and no advantages with Leonardo Saggioro of Brazilian Top Team earning the favor and the gold over Isaque Paiva of Saikoo.

Joseph James of Cicero Costha won the light-featherweight gold by defeating Checkmat’s Leandro Silva with a 14-0 in points and an armbar finish.

Roosterweight was won by Brasa’s Felipe Costa by taking the back and earning 4-0 in points over Checkmat’s Igor Rodrigues.

Luiza Monteiro came determined to end her losing streak and get back on the winning track. The representative of academia Cicero Costha showed her talent by winning the weight over Renata Pimentel, with 4-0, and the absolute, beating Vanessa Oliveira, with 9-2.

“It’s a great feeling of accomplishment. That’s how I like to go out of the competition. Vanessa has a good guard, but I got  the positions at the end and got the win. I have to dedicate this title to my father, who had a birthday this week, and my mother, who paid my travel and registration for the championship, “said Luiza. 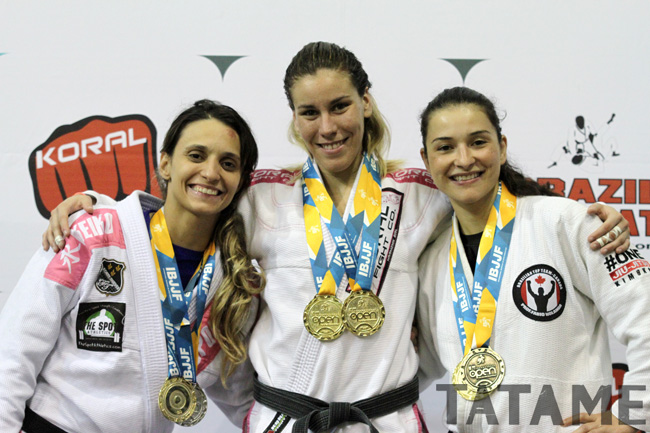 Middleweight gold was earned by Vanessa Oliveira of GFTeam over Behring’s Delcia Enricone by a footlock.

Juliana Nogueira of Brazilian Top Team defeated Aline Paula Coelho of C.E. Irmao Felix JJ by 18-0 in points for for the featherweight gold.

The old guard also gave the gentle art show at the weekend.The highlights were André Bastos, who won the heavyweight and absolute, at Master, and Andrew Marola, who repeated the feat in Senior 1. Helvécio Penna, a figure always present in tournaments and was also among the adults, won weight and absolute at Senior 3.