Jackson Sousa Suspended from Checkmat, Stripped of Sponsorship due to Sexual Harassment Allegations 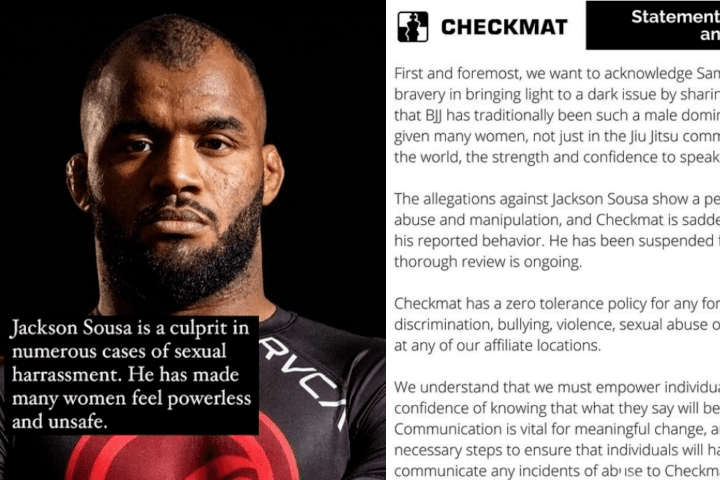 BJJ black belt competitor Jackson Sousa has been suspended by Checkmat, cancelled from multiple gyms associations, and stripped of sponsorship by Shoyoroll.
The reason? Numerous allegations of sexual harassment.

The allegations that have been made by multiple women against Sousa describe him as a predatory, manipulative, sexually inappropriate, and physically threatening. All of these allegations have been initially collected and then made public by Samantha Cook, a UK black belt. Read it below:

As it’s been described above, the allegations encompass pursuing a relationship with teenagers, abusing his position of power in order to coerce women, to physically forcing himself on a woman.
As a result of the numerous allegations, Shoyoroll – Sousa’s primary sponsor – cut ties with him:

In light of the recent outpouring from the female BJJ community entailing sexually predatory and abusive behavior from prominent male athletes, Shoyoroll has made the decision to formally end all sponsorship and affiliation with Jackson Sousa.

Also, the head of team Checkmat BJJ – Leo Vieira – issued a statement that suspends Sousa from the team:

The allegations against Jackson Sousa show a pervasive pattern of abuse and manipulation, and Checkmat is saddened and appalled his reported behavior. He has been suspended from Checkmat, and a thorough review is ongoing.