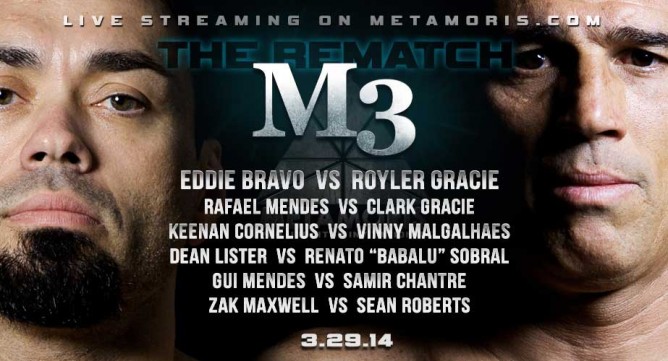 Most thought it would never happen but it’s happening March 29th 2014 in Los Angeles California at the famed Peterson Automotive Museum Event Deck. Usually for special events such as art exhibits and fashion shows, Metamoris took an interest in the Petersen for its more intimate setting that will create a vortex of pure Jiu-jitsu energy bouncing off the walls. There will be limited seating on purpose so we can guarantee there will be no bad seats!  Tickets go on sale Friday January 24th at 12pm (Pacific Time) starting at $100.

There has never been a more anticipated grappling match then the re-match spanning over a decade between Royler Gracie and Eddie Bravo.  Eddie was the first Jiu-jitsu practitioner to tap Royler (in his weight class) in a grappling competition at the 2003 ADCC by triangle choke. Now they will face off 10 years later for a final showdown to determine whether Bravo was lucky or if he had Royler’s number all along.

“I’ve wanted a rematch for 10 years,” said Bravo at the Metamoris 2 post-fight press conference at Pauley Pavilion. “I got lucky to go against a legend once. Most people, most lightweights, their dream was to go against Royler. I was lucky enough get pitted up against him. If Buster Douglas got a rematch, that is something I would want to see.”

For his part, Gracie reminded fans that anything can happen in Jiu-jitsu, and that he’s glad to get the opportunity to avenge his most famous loss.

“Make a little mistake and you’re done,” Gracie said. “Just one little mistake. I’ll try to do my best for the next one. Who knows what is going to happen this time, but for sure I’m going to be 100 percent.”

Kenny is a huge Jiu-jitsu advocate. Aside from being the only UFC fighter in history to compete in 4 different weight divisions, Kenny started off his fighting career with a deep respect for Jiu-jitsu. Kenny’s first Jiu-jitsu experience was a seminar from UFC legend Royce Gracie. He recalls getting the bug and competing multiple times with his brother and being successful early on. When asked where he trained he replied by saying he and his brother just roll around in their basement. We are honored to have Kenny on board as a commentator as he has years of experience with ESPN, FOX and a black belt in Jiu-jitsu.

Jeff is no stranger to the Jiu-jitsu community. Jeff started his training in Santa Barbara with Ricardo “Franjihna” Miller. Jeff has a very open competitive grappling style and may be the most entertaining grappler of all time. His victories are too numerous to count and if you think of your favorite Jiu-jitsu matches Jeff is most likely in your top 3. Jeff commentated for a couple MMA promotions as a Jiu-jitsu analyst and now we are happy to see him in something more true to his roots.