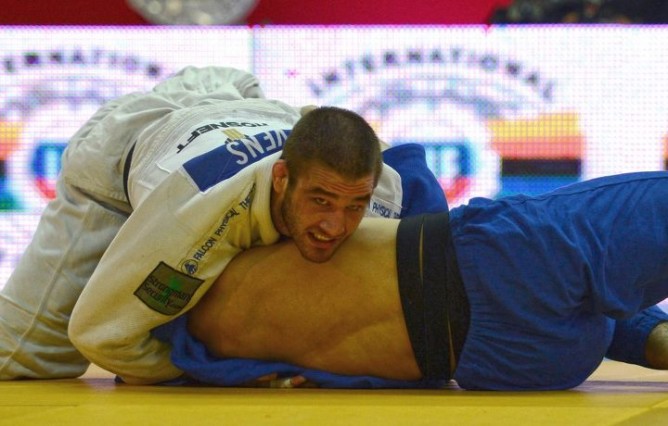 The IJF International Judo Federation has just sent an email to all its official schools worldwide with a warning: ranked Judo athletes may not participate in other grappling competitions.

The email comes from the Federation president with the attachment coming from the International Judo Federation.

Ranked Judo athletes such as Travis Stevens (Judo Olympian) or Leonardo Leite (Pan AM Judo Champion) have participated in major BJJ tournaments such as Copa Podio, Worlds or Jiu-Jitsu world expo. This would mean that with this rule, they may no longer do that.

Ther IJF has also developed a circuit of Judo Ne Waza tournaments which basically follow very similar rules as BJJ with a focus on ground fighting. This is the same principle that FILA (International Wresting Federation) did with Grappling and their ‘Gi Grappling’ (sic). 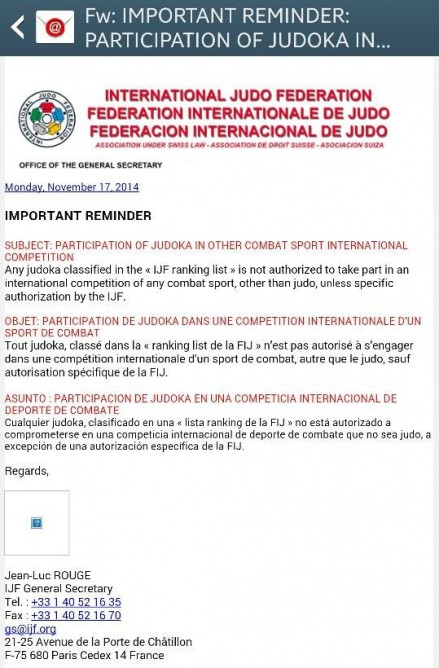 Over the years, the rules in sport Judo have been changed again and again. The IJF’s rationale for every change they do is to make Judo more spectator friendly therefore easier to market. However, any smart person can easily see that the changes in rules just kept making Judo more and more unfriendly to BJJ and wrestling athletes who join Judo competitions. One of the last changes they did was making it illegal to grab the pants or the legs and warranting an immediate disqualification. This automatically set aside original judo moves like morote-gari (double leg take down), kuchiki daoshi and kibisu gaeshi (ankle pick and cross ankle pick), sukuinage (scooping throw). These were legitimate moves and more importantly, they ARE Judo moves despite what the IJF says.

It seems that the IJF are disturbed by the fact that BJJ athletes and wrestlers perform well and beat some world class Judo athletes.

The IJF is taking Judo to a different direction, not the one that Sensei Jigoro Kano intended it to be.

Every year, Jiu-Jitsu evolves with new innovations in techniques. In Judo, every year there are new rules prohibiting grips, grabs and Judokas can do less and less because of the rules imposed by the IJF.

if you do Judo and BJJ, you shouldn’t feel the need to participate in that age old argument on which is better. Judo and BJJ are two sides of the same coin, yin and yang.

Check out this video of Travis Stevens competing at Copa Podio: