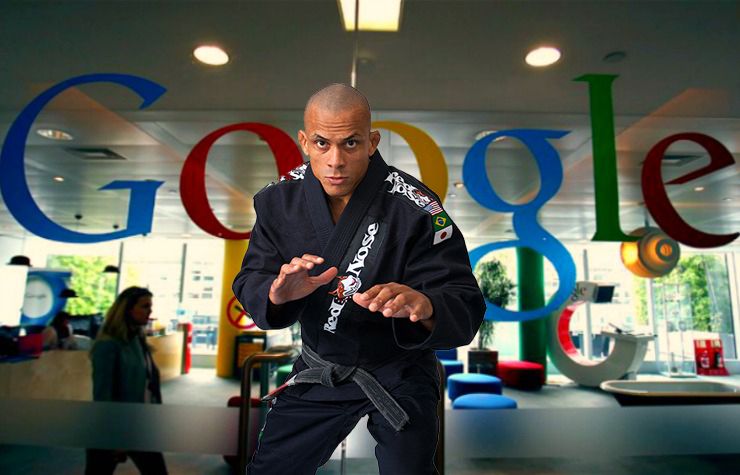 The powerful ‘Google’ company which has its offices located in Mountain View, Silicon Valley (California) is now offering BJJ classes for their employees!

The Google headquarters are called the Googleplex and offer awesome perks like free shuttle bus service from around the Bay Area (with WiFi!), on-site doctors and generous new-parent policies to Café Jia (which serves Asian food) and Café 150 (which sources all its ingredients from within 150 miles of the Googleplex).

The point of offering all these perks on campus are to make working long hours and practically living at work bearable. Many employees sometimes work 16 hours days for months.. The BJJ training was taught by Milton Bastos from Institute of Martial Arts in California.

Milton wrote on his facebook about the success of the first class:

Class at google today reach full capacity … I guess we will need more mat space to attend more people… Thank you all who joined the class.

Picture of the first training session: Google is not the only big multi-national company to offer BJJ.
GovSmart is a multi million dollar IT company has been offering its employees free BJJ lessons for the past 6 years.

The million-dollar IT solutions company has just been named the fastest growing business in Charlottesville for the second year in a row and credits much of its success to Jiu-Jitsu.

GovSmart CEO Brent Lillard is a Pedro Sauer purple belt who has been training for 10 years. The idea for Lillard is to increase the self confidence of his employees through Jiu-Jitsu.

“You see exactly who the person is. You really don’t know someone, I feel like, until you’ve rolled with them.

“I see smaller more easily intimidated people becoming more comfortable and then I see the bigger cockier person become a little bit more humble because they are getting beat up by people much smaller than them,”

“I myself lose five pounds of water weight every class. One guy lost over 160 pounds doing Jiu-Jitsu.”

“When we get in stressful situations where some of the equipment we’re delivering is mission critical, we’re able to keep our heads clear,”