Brock Lesnar Promoted to Blue Belt in BJJ By Comprido 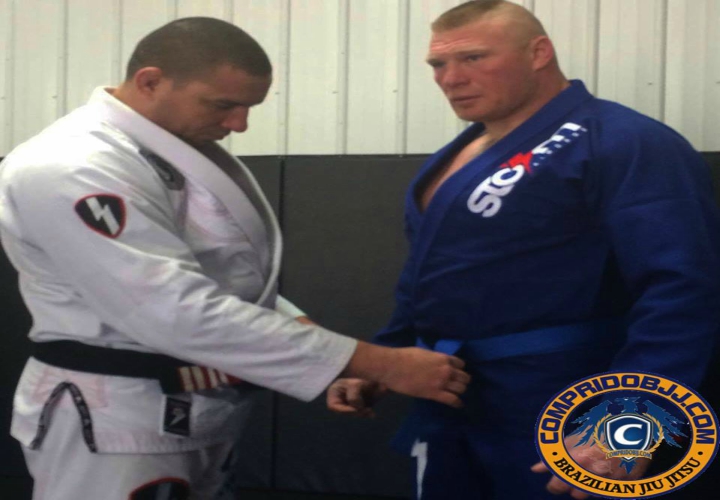 Rodrigo Comprido Medeiros, Lesnar’s long time Jiu-Jitsu coach has just promoted him to blue belt in BJJ. Comprido took his time. Lesnar has officially been training BJJ under Comprido since he prepared for his MMA debut in 2008.

You can see the video of the promotion here:

He is accompanied with his training partner and Wrestling great Cole Konrad.

In an older interview with GracieMag, Comprido talked about his student:

Brock is every coach’s dream. He doesn’t complain, he always pays attention to what we’re teaching and he’s a born athlete. He has abnormal strength and speed. The sky’s the limit with him, and he’ll continue to evolve for a long time. He’s a grappler, so he loves training on the ground, likes training as a whole a lot. And one thing you haven’t seen yet is how he has an aggressive guard. He’ll surprise a lot of people.

Eventhough he’s only a blue belt in BJJ, Lesnar has a very strong Wrestling background. Lesnar attended Webster High School, where he  competed in amateur wrestling. He was a two-time state champion in amateur wrestling with a record of 33–0–0 in his senior year. Lesnar then attended Bismarck State College, where he won the National Junior College Athletic Association (NJCAA) heavyweight wrestling championship in his sophomore year. He transferred to the University of Minnesota on a wrestling scholarship for his junior and senior college years. There, he was roommates with future WWE colleague Shelton Benjamin, who was also his assistant coach.