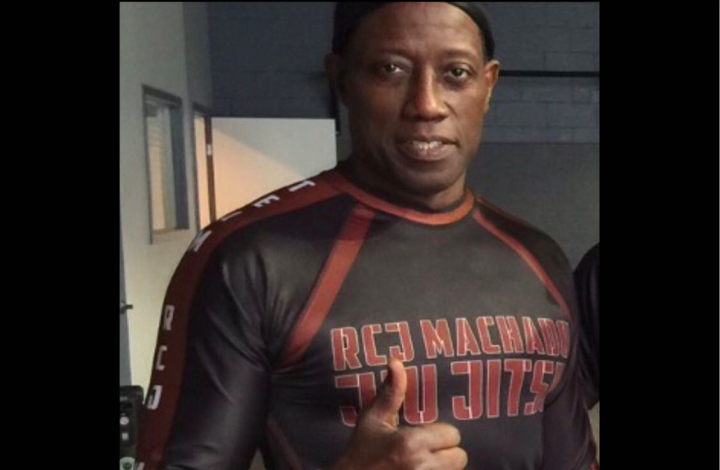 Brazilian Jiu-Jitsu is getting more and more popular among the Hollywood A list celebrities. Famous people that train or have trained in BJJ include Ashton Kutcher, Prince Jackson (son of Michael Jackson), Marlon Wayans, Freddie Prinze Jr, Shaquille O’neal, Paul Walker, Scott Caan, Scarlett Johansson, Usher etc.. The list goes on and on.

Snipes is best known for his role as the Marvel Comics character Blade in the Blade film trilogy. Snipes began training in martial arts when he was 12 years old. He has a 5th degree black belt in Shotokan karate and a 2nd degree black belt in Hapkido. He has also trained in Capoeira under Mestre Jelon Vieira and in a number of other disciplines including kung fu at the USA Shaolin Temple and Brazilian Jiu Jitsu and Kickboxing. During his time in New York, Snipes was trained in fighting by his friend and mentor Brooke Ellis.

A few years ago, UFC commentator and BJJ black belt Joe Rogan and Wesley Snipes were close to stepping in the UFC cage and fighting each other.

They exchanged some harsh words through the media, and Rogan has consistently maintained his willingness to “choke out” Snipes.

Regarding BJJ celebrities, The Gracie Academy (Rorion side) have an academy in Beverly Hills. Marcus Vinicius has been teaching celebrities for decades at Beverly Hills Jiu-Jitsu Club and Rigan Machado has a large group of celebrities training under him.

Even if they have bodyguards most of the time, celebrities still want to know how to defend themselves and also get a great workout but what about sparring? Can a celebrity really risk getting their face bruised up or ears mashed up from a hard Jiu-Jitsu roll?

Some have no problem with a tough sparring while some are extra careful and do not spar.

In the April 2015 issue of Jiu Jitsu magazine , Coral belt and BJJ legend Rigan Machado talks about the special program that he has designed by his celibrity students: