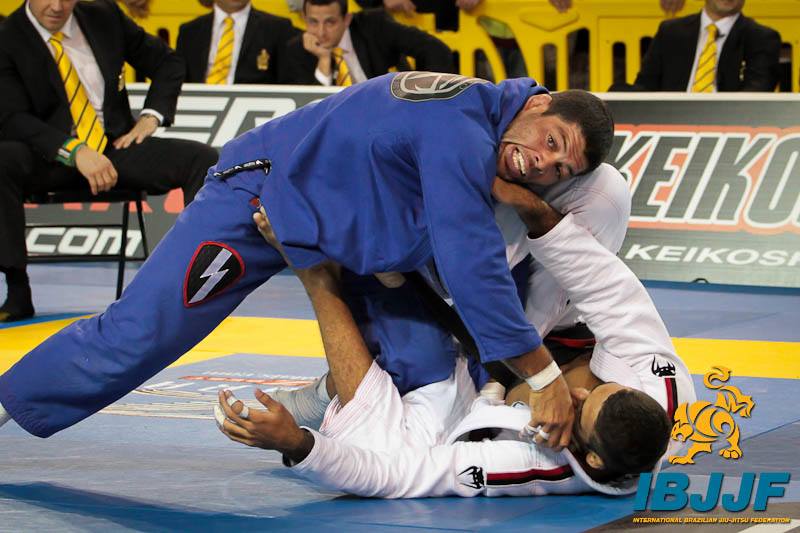 The 2014 Pan American double gold Champion is André Galvão . The Atos fighter won weight and absolute, on Sunday in Irvine, California and left the mats, showing a shirt that read: “Trust me, I’m a Jedi .

At ultra heavy, the leader of Atos beat the “Danish termainator” Alexander Trans, while in the absolute final, he overcame Leandro Lo .

Galvao, who decided to compete in a class way above his usual middle heavy, took a 5-1 advantage against Alexander Trans, who is the current absolute champion of Europe.

In the open category final, Galvão and Leandro Lo had a battle of the lighter weights. Proof that size doesn’t always matter The black belt of Atos spent much time working on passing his opponent’s open guard, who merely worked in defense without risking sweeps. With three minutes left, Galvão increased the pace and the monotony gave way to excitement. Galvao came very close to passing the guard (he reached the side, but did not stabilize the position) and gained the advantage that put him in the highest place of the podium. Leandro Lo, in return, did not go home empty-handed, since he had beaten Otavio Sousa (5-2, by advantages) minutes before, at middleweight.

In 2013, Galvao had lost the absolute final to Marcus Buchecha. However, he came back strong this time to snatch the gold medal in weight and open division.

In the super-heavy, Luiz Panza was a revelation. The athlete from Barbosa JJ, submitted Bernardo Faria with an armbar and much celebrated winning the Pan

The negative point of the Pan American were the many ‘close outs’. In the male finals,  5 of 9 weight classes revealed their champions without the fights happening.

In females, Bia Mesquita won the gold medal in the lightweight division at beating Fabiana Borges by choke. In the absolute, she beat Andresa Correa 6-1, by advantages.

” I am very happy what we planned worked out, we had an excellent camp and everyone contributed greatly, some of our athletes didn’t get the gold they normally win but in the end we made history!”

Atos team was founded in 2009 by Andre Galvao and Ramon Lemos.

Lightfeather: Paulo Miyao got gold after close-out with João Miyao

Feather: Mario Reis got gold after close-out with Gianni Grippo

Light: Lucas Lepri got gold after close-out with Michael Langhi

Medium-heavy: Guto Campos got gold after a close-out with Keenan Cornelius

Heavy: Yuri Simões got gold after a close out with Lucas Leite

In the teams competition, the final results were:

For the complete results, go to IBJJF.com