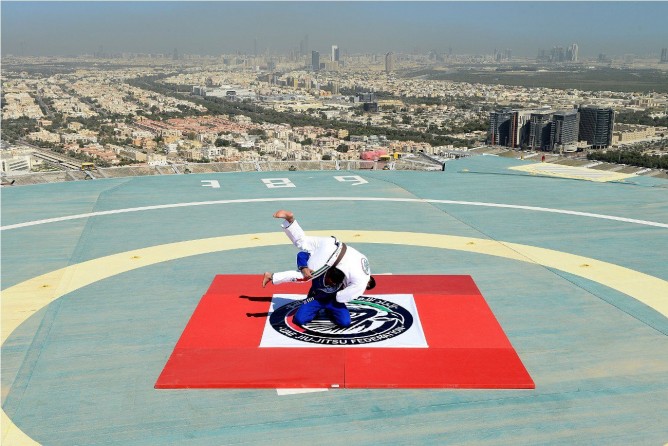 The Abu Dhabi World Professional Jiu-Jitsu Championship 2013 and World Jiu-Jitsu Children’s Cup held under the Patronage of H.H. General Sheikh Mohamed Bin Zayed Al Nahyan Crown Prince of Abu Dhabi, and Deputy Supreme Commander of the UAE Armed Forces, will feature the strongest line-up in the history of the tournament when the best fighters from around the world compete in UAE capital from the 10th – 13th April 2013.

According to the schedule, the male and female adult white belts and blue belts and master& seniors white, blue and purple belts compete this Wednesday, April 10.

Saturday, April 13, will be dedicated to the open class competition of all divisions.

Beyond world-class Jiu-Jitsu action, organizers, the UAE Jiu-Jitsu Federation have promised a star-studded family event to celebrate the championship’s fifth anniversary with the attendance of UFC superstars BJ Penn and Demian Maia amongst a host of new attractions to entertain all at the free to attend event.

Adding to the tournament excitement, Penn and Maia, two mixed marital arts legends known globally for their devastating use of Brazilian Jiu-Jitsu in UFC, will be present throughout the ultimate fight weekend at the Abu Dhabi National Exhibition Center (ADNEC), meeting fans and conducting training demos.

This year’s championship builds on Abu Dhabi’s emergence as a global capital for Jiu-Jitsu, with more than 750 elite male and female fighters from over 50 different countries including the UAE, Australia, Brazil, China, New Zealand, South Africa, South Korea and USA, all competing for title of ‘World Champion’ and an increased cash prize of Dhs1.45m.

Speaking ahead of the Abu Dhabi World Professional Jiu-Jitsu Championship 2013 & World Jiu-Jitsu Children’s Cup, Abdulmunam Al Hashemi, Chairman of the Abu Dhabi Jiu-Jitsu Federation said; “This year’s championship is going to be the most spectacular yet as we celebrate our fifth anniversary with the strongest line-up in the history of the tournament and unrivalled entertainment. Having completed trials around the world the best of the best are now confirmed to fight in Abu Dhabi. The fighters are ready and Abu Dhabi is once again ready to host a major international event that sets new standards. The excitement is really building towards a weekend of world-class action. Jiu-Jitsu offers a unique combination of intense power as well as physical and mental strength ensuring that whether a dedicated fan or completely new to the sport this event is not to be missed.”

More than 750 international entries were received across multiple divisions, following a series of trial tournaments taking place across the world before the Abu Dhabi fight card was confirmed and announced by the UAE Jiu-Jitsu Federation for the April championship.

Here is a list of the main competitors in each division: