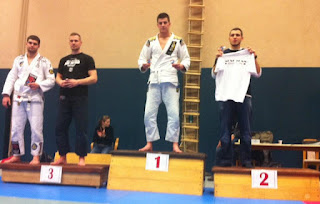 This Saturday February 11 Vienna, Austria was host to the first edition of the Vienna Open. The competition brought together all clubs from the region, from Macedonia to Hungary all the way to Germany. If you haven’t had the chance to read my Competition preview and predictions here it is once again: http://www.bjjeasteurope.com/2012/02/bjj-vienna-open-2012-competition-review.html

In view of the results down below, it is fair to say that my preview was fairly accurate. You can’t call me Nostradamus yet but watch this space for future competition previews and predictions.

All together, the competition was a BJJ feast with some of the region’s best battling out.
In the white belt, Mersim Miki Julevic was the big winner taking home the gold in division and Open weight.
In Blue belt, Orlando Neto bjj took most categories with athletes Daniel Schaerf, Arsan Asludin and Michael Rirsch standing out.
Purple belt Akos Szekeres from Gracie Barra Hungary took the -88,3 beating Tevz Erzen of Gracie Barra Slovenia in the final.
In the women’s division, Livia Plettenberg of Orlando Neto took the gold in -62 kgs and Mateja Makar of Alliance Zagreb took first place in +62 kgs.

However, the party was ruined by an unfortunate incident, in the final of the Open class Purple belt opposing Jungle BJJ’s Roman Pitbull and Orlando Neto BJJ’s Arbi Agujew. The fight started normally, but as the two competitors went out of bounds, tension flared and pushing and shoving happened. What followed next almost never happens in our beloved sport of BJJ. One member of Abujew’s crew (who I understand is not a bjj parctitioner) went on the mat and attacked Roman Pitbull from behind with a flying headbutt, then a massive brawl erupted between members of Abujev’s entourage and members of Jungle BJJ.  Thankfully nobody was seriously hurt but this was a sad day for BJJ in our region.
Let’s look at the positive side of this situation. This has resulted in a massive reaction from all members of the community and it is safe to say that we all condemn this cowardly behavior. For this to never happen again, the following would have to happen:
1. Banning of Abujew and his crew from all regional competition for a agreed period
2.An official Apology from the Orlando Neto BJJ camp with a promise to control all their members (Professor Orlando Neto is a respected member of the local bjj community. His students (Daniel Schaerf etc..have competed in many tournaments without any incident) but his association with such individuals will penalize his team, which is a shame.

Anyways lets give props to the organizers who did a great job (Sandros Santos, Max Carvalho and Heinz Fridrich) and all the competitors who gave it their all.