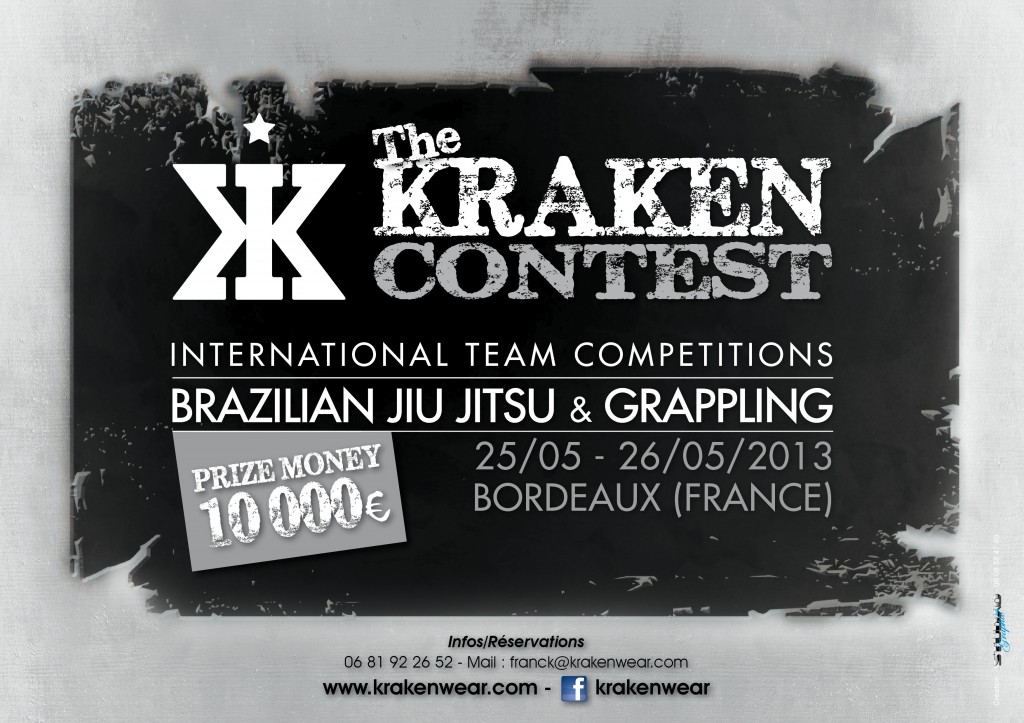 1.THE KRAKEN CONTEST is an international team tournament, which will span two days (one dedicated to NoGi, the second to Gi BJJ). This event’s objective is to call upon the world’s best teams wishing to establish their place on more than solely the individual results of their athletes’ over the course of the season.

The winning teams will be offered a purse of 10’000 euros.

THE KRAKEN CONTEST, « One Team, One day, One Success »

The KRAKEN CONTEST will be held under IBJJF rules.
You can have check the aforementioned rules:

Blue and purple belts will be subjected to the same limitations as that applying to browns and blacks as described by the IBJJF, meaning for adults to seniors (Blue, Purple, Brown and Black):

• Engagement
This event is open to all academies regardless of country.
They will have the choice to participate in one or both competitions.
THE KRAKEN CONTEST is a tournament geared towards experienced fighters only.
Hence we strongly suggest for coaches to keep their student’s health in mind and not sign up under experienced competitors.

Organizers will not be held responsible for team composition be it by any individual or structure.
A school has the right to enlist a different team for each day of competition.
An academy wishing to engage in both days of the tournament can enlist for the second day a team whose composition differs from that of the first (05/25 NoGI et 05/26 BJJ).

• Signing up
Signing up will be done online on the CFJJB’s site.
The registration fees are of 250€ for 1 day and 400€ for both.
Registration will be made official upon reception by the organizers of all of a team’s fighter’s inscription files as well and medical certificates.
You will then receive confirmation via e-mail as well as a receipt for your payment (on request only).
The organizers will close all registrations on 05/18/2013.
• Requirements
Every team must commit to fulfilling all of the aforementioned requirements, only then will they be allowed to participate in the KRAKEN CONTEST.

THE KRAKEN CONTEST is open to all fighters 18 and older (ADULT category and above), whom will present the organizers with a medical certificate insuring their aptitude in taking part in a NoGI/BJJ competition and whom will fulfill the requirements in the « engagement » paragraph .
The medical certificates must be sent before competition day or (under exceptional circumstances) on fight day itself.
CAUTION, only holders of a blue belt and above are invited to participate, we remind trainers that they are solely responsible in evaluating their students ability to take part in this competition.

5. THE ORGANISATION OF THE KRAKEN CONTEST :

• Competition formula:
 Team VS team (face to face). Before every team match the referee will pick at random which category is to fight for the win in case of a draw.
Individual matches will take place going from lightest to heaviest.
 Point based tournament if up to 5 teams are present.
 Two point based tournaments up to 10 then double elimination brackets featuring the winners of both pools.
 Double elimination brackets from 11 teams registered.
 Pairings are free to be modified by the organizers depending on the number of registrations.
 Brackets will be made public days before the tournament.
• Weight-ins:
Will be done upon the calling of your team for their first match. Teams will be weighted in wearing their fight gear (Gi for BJJ or fightshort/rashguard for NoGi).

 Each team must be composed of at least 3 fighters in 3 of the required weight classes
 In the case of the subscription of different teams by an academy changes in lineup will not be allowed after weight-ins.
• Team composition:
A team can be composed of a maximum of 5 fighters (corresponding to each weight class), Holders of a blue belt at the minimum and belonging to the ADULT class or higher.

During point based tournaments, the winning team will be the one who has won the most fights. Points will be given according to the final result :
Victoiry = 2 points
Draw = 1 point
Defeat = 0 point
During « double elimination », is declared the winner the team with the most victories.
In case of a draw between two teams (possible if a member of each forfeited or if both have a 4 people line up), organizers will first take submissions then points into account.
As a last resort (complete draw) the randomly picked category at the start of the matches will fight again.
The result of said fight will decide the winner.