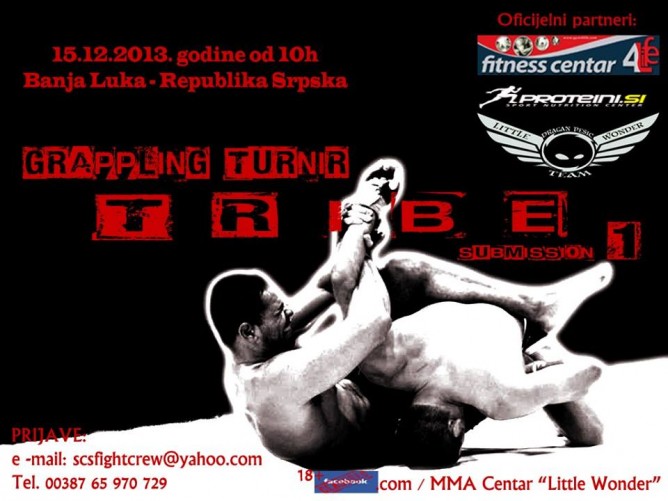 On Sunday 15th December in Banja Luka, Republika Srpska (Bosnia) the MMA Wonder Crew is organizing and 4Life Gym are organizing the first grappling tournament in Republik Srpska named “Tribe Submission 1”. The creator of the tournament is a Serbian / English MMA fighter Dragan Pesic. The tournament is the first of its kind in the Republika Srpska.fightsite.rs found out that TFC – Tribe Fighting Championship is going to become a new MMA fighting promotion and this grappling tournament is just the beginning of martial events in this promotion. The tournament has attracted a lot of attention in the region, and in addition to teams from the RS and BiH, several MMA and BJJ teams from the region confirmed their participation in the tournament: Pirana Fight Club, Zagreb, DSG, Belgrade, MMA Budva – Montenegro, MMA Brežice – Slovenia, Family Fight Team Sombor….and more.
Another reason why this tournament has attracted a lot of attention is that Pesic is affected by the story of 19 -year-old marathon runner with 30 medals and awards, who has been sleeping in a shed of wood at a cemetery in Sombor . So Pesic in agreement with co-organizers and friends of the Family Fight Team from Sombor initiated activities to help young athletes Sombor and all the money from the tickets will be donated to this young athlete .
Pesic adds:

” Although I have not planned to fight because I am the organizer of the tournament and will soon have my MMA match in England , the story about Lazar has been inspiring and emotional to me , and if at least one more spectator come to watch tournament because of me on the mat in Banja Luka, with pleasure I gamble and fight . I asked the sponsors to make shirts for Lazar , which will be sold at the tournament for a simbolic fee and all the money from the sale of T-shirts will be given to our friends from Family Fight Team Sombor who will go after the tournament to visit and donate to it to Lazo. I urge by this way if anyone can help to Lazo in any action plesase do it.This kid is awesome!”

MMA Wonder Crew co-organizer is the first team from the Republika Srpska who independently and officially compete in BJJ competitions and were the first medal winners in the history of BJJ in the RS.