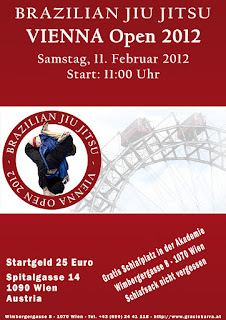 So this is the first of a series of reviews that I will be doing for regional competitions. Last year I competed in the Croatian Open, Karlovac 4rivers Open, the Hungarian Open, the Serbian Open, the Slovenian Open, and now in january at the Europeans in Lisbon. So I have a some idea about who won what in the tournament circuit but I still have to refer to results of these past tournaments to pick favorites for the Vienna Open. Please bare with me if I don’t know some competitors.
The list of competitors is here: http://www.vienna-open.com/events.php
I will only review blue, purple and brown belts. And I won’t review female divisions at least for this one as I really don’t know enough about the female competitors.
Before we get to the brackets, keep in mind that this tournament is happening exactly 2 weeks after the European Open so may of the top competitors in the region will not be comepeting (at blue: Vojnovic, Nadarevic, Domanovic,Tadjanov, Bence, at purple/brown: Kvesic, Rajacic, Ikic, Salina, Culic, Ucovic, Huni, Kesic etc…).
This competition is also happening the same weekend as the ADCC Pro trial in Bucharest.

These three competitors are all from Gracie Barra Vienna and haven’t placed in any regional competitions or Europeans in 2011 so I really don’t know.

This division has 15 competitors. Tabori Kristof (GB Hungary) competes a lot and won his division at the last Hungarian Open and competed at Croatian and Europeans, Martin Krenek of Jungle BJJ Prague got 3rd place inn Hungarian Open, and Martin Mihajlov placed 2nd at the Serbian Open. I see the gold going to Tabori Kristof this year by more experience.

11 competitors. This is a stacked division with a lot of dangerous guys. I see Daniel Schaerf and Andras Fazekas as heavy favorites. Daniel Scaerf is a very athletic guy who won the Croatian and Slovenian Opens. Andras Fazekas placed second in almost every tournament in the region this year. The one missing here is division king David Vojnovic.

Adult Male Blue-94,3
Contenders: There 6 guys in this division but none of them have placed inn regional competitions in the Past. So I can’t really give an opinion. The divison king Asa Nadarevic is missing.

Division with 4 competitors. My favorite is Sasa Milinkovic (Leo Neves Osijek) who always places in every competition he competes in. Arsan Asludin I’ve never heard of but since he’s a Tchechen, I’;m guessing that he’s strong and dangerous 🙂

I don’t know anyboday in this division..

Both of these guys are pretty evenly matched. Velimir Rasic placed 2nd at Serbian Open, and Saso Sotlar second at Slovenian Open.

Adult male Purple -88,2kg
5 competitors in this mdivision. Most of them I haven’t seen before in competitions. I see the Very aggressive Tevz Erzen (Gracie Barra Slovenia) as the heavy favorite to win this division

All the other divison have just one competitor which means that the Absolute will be the most interesting part of this compettition.

Contenders: Roman Pitbull (jungle BJJ), Demis Barros tenorio (Brown Belt), Atila Banfi (GB Hungary), Tevz Erzen (Gracie Barra Slovenia)
I see either Tevz Erzen or Roman Pitbull winning this. Demis Barros Tenorio is a Brown belt so I’m guessing he will also be game.
That’s all folks. let’s see on Sunday when the results are published if I was right or will some new talents emerge.