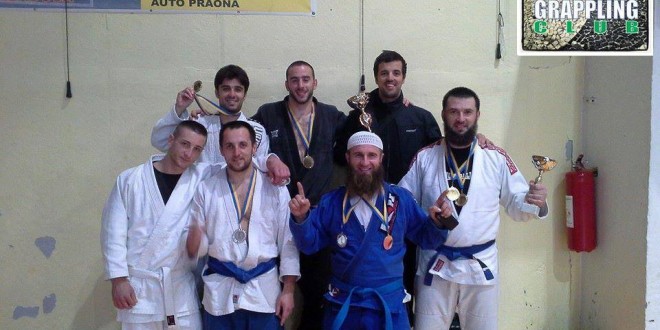 On Saturday November 30. 2013. competition ” BJJ BOSNIA OPEN 2013 ” happened in Velika Kladusa, BiH, which is for now the only active Brazilian Jiu Jitsu competition in Bosnia. On this occasion Rio Grappling Club Bosnia grapplers, won eight medals, as well as a trophy for the most successful team.

Rio Grappling Club has also deservedly been declared the most successful team since its grapplers quickly ended the fights and won medals. For example: Adi Isović won by submission, triangle, third minute of the fight. Ivor Tokic win by armbar, fifth minut of the fight. Edin Nukovic won on points by 20:02! In the absolute division, in the finals, Almir Kapic fought with teammate Edin Nuković.

To win eight medals is a great success, because guys do not have any sponsors and they pay everything themselves. They don’t have adequate equipment for training and some of them have only one or borrowed kimono to compete in (typical Bosnian story).

History of Rio Grappling club Bosna
In the early 2008., with the aim of promoting the sport of grappling and the art of Brazilian Jiu Jitusua, Bosna Grappling Team was established.

In cooperation with Wrestling Club Bosna BGT was founded by Poturović Jasmin, one of the pioneers of Brazilian Jiu Jitsu in Eastern Europe.

The aim of Rio Grappling Club Bosna is to provide a safe and friendly environment where we can exercise and learn Brazilian Jiu Jitsu and Grappling, and enable our students to improve beyond the fighting, by developing skills that will be useful to them in their lives.

Our focus is the technical and competitive aspect of the art, and the growth of our family with the goal of becoming one of the best teams in the world of Brazilian Jiu Jitsu and grappling.

RGCB Trainings are held four times a week. The number of members is limited, and membership can only be achieved through communication with the instructor.