Preview and predictions for the Croatian BJJ Open 2012 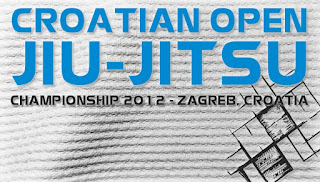 The Croatian BJJ Open (together with the Hungarian BJJ Open) is South East Europe’s (or however you call the region which includes all those countries) biggest  BJJ competition with a tradition of over 6 years. It is truly a large international competition with between 10-15 countries represented depending on the year. The guys from Subos have done a great job at improving the competition organisation every year and this year they will be offering gift prizes of Gameness kimonos for all first price winners from white to black belt!

Unfortunately I won’t be competing in this year’s edition as I’ve been sick as a dog for the past 5 days, which is probably a result of over-training for the past 8 weeks.
The list of competitors is here: http://www.crojj.org/registration/competitors
I will only review female white and blue as well as male blue, purple and brown/black belts.

Ante Palac has to be the favorite here as he won the Croatian league first place last month. Look for either Davor Radojevic or Jernej Janezic to take second place.

Tabori Kristof took first place at the Vienna Open 2 months ago and also won the Hungarian Open and competed at the Europeans in january. He is the most experienced competitor. I see him taking this followed by Martin Mihajlov of Macedonia who took bronze at the Vienna Open and silver at the Serbian Open 2011.

This division has 12 competitors. Uros Jurisic will not be competing this year. Miha Perhavec (won the Serbian open, 3rd at Slovenian, 3rd in Croatian league, is a force in the division.  Michael Rirsch won the Croatian Open last year and also too silver at the Austrian Open 2 months ago. Don’t count out the rising stars of Alliance Zagreb: Luka Skoric, Mario Butorac, Bojan Rendulic (who have all placed in recent regional competitions). I see Michael Rirsch winning this, and Miha Perhavec, and any of the three Allaince Zagreb guys placing second.

16 competitors. This is a stacked division with a lot of dangerous guys. I see David Vojnovic, Andras Fazekas, and Vedran Orkic as heavy favorites.  Andras Fazekas medalled in almost every tournament in the region this year. Vedran Orkic, was a trailblazer at white belt where he won all regional tournaments and got silver at the Europeans. His transition to blue belt this year wasn’t hard as he placed second to David Vojnovic at the Croatian league last month. It should also be interesting to see how juvenile world silver medallist Denny Vukovic does in the adult division (Denny is still just a junior). Denny has a very nice traingle/armbar. I see David Vojnovic taking this  followed by Orkic or Fazekas/ Erkapic.

Adult Male Blue-94,3
Contenders: There are only 4 guys in this division.
I can’t see anybody beating the very spectacular Ivica Tadjanov (Leo Neves Osijek)

Division with 5 competitors. My favorite is Asa Nadarevic who has won everything at blue belt and recently got the silver at the Europeans. He is now going to try to get the gold at the Worlds in June. The only thing is that he is fighting a weight class above his normal division. Let’s see if the experienced and always game Sasa Milinkovic can offer him a good match. I see Nadarevic taking this.

Adult Male Blue +100,3
There are five guys in this division. I don’t know any of them apart from  my team mate Momir Cucuz (Zerjal Team Serbia), who won the last year’s Serbian Open and Hungarian Open as a white belt. He is a very talented and very quick heavyweight who is always improving. I see him taking this.

Dejan Zivkovic is a very technical player with a very good guard. Velimir Rasic competes a lot and placed 2nd at the Serbian Open, and 3rd at the Croatian league. I see Zivkovic taking this

Adult male Purple -82,3kg
3 competitors in this division. I don’t see anybody beating Uros Domanovic (Zerjal Team). Last year he won 1rst place at Serbian Open, 3rd place at the FILA Worlds, and this year 3rd place at Europeans (submitting everybody in less than 1 minute). The kid is a beast and could end up being a great Champion in our sport.

Adult male Purple -88,2kg
6 competitors in this division. I think this will be played between Djordje Kesic (UFK Rupa) and Luka Radulovic (Zerjal Team). Both have similar games. I see the edge going to Kesic though (Won the Slovenian Open, and last moth’s Croatian League) followed by Radulovic and the always game Matej Truhan.

Adult Male Purple -94,3 kg
6 competitors in this division. I see either the long and lanky Dominik Livaja and the experienced Levente Varga taking this division.

Adult Male Purple -100,3 kg
3 competitors in this division. Damir Vidakovic (1st place Serbian Open 2011) will be competing in a weight class above his usual. Attila Banfi was able to cut down to -100,3 kg from his usual +100 weight class. If Vidakovic is in shape, I see him taking this without too much problems.

Brown Belts. There are only 6 brown belts competing so the Absolute should be the most interesting.

-82,3kgs brown
Contenders: Zvonimir Ucovic and Mateja Valjarevic.
I don’t see anybody in the region beating Ucovic any time soon. Valjarevic has a solid and technical game and should have a set strategy to beat to beat Zvone so this should be a interesting fight.

-88,3 kgs brown
Matko Kvesic is alone in the division as Gile Huni (me) has forfeited due to high fever.

+88,3 kgs brown
Contenders: Mensur Pasic (Edson Carvalho Bosnia), Damir Salina (Check Mat), Martin Starcevic ( Alliance Black Dragon).
Mensur Pasic hasn’t competed much in regional competitions. Damir Salina is a double medallist at this year’s Europeans in brown belt Masters. Martin Starcevic is a experienced competitor who has medalled at purple adult at the Europeans. I see this one going to Salina as Starcevic hasn’t competed in a while.

There are 7 competitors in this division. I’ll be honest and say that I don’t know too may of them. Although Livia Plettenberg won the Austrian Open two months ago and and she is a MMA fighter, so I see her as the favorite.

There are 5 competitors in this division. Mateja Makar has competed in almost every competition in the past year and has placed in most of them. I see her taking this.

Female Adult blue + 60kgs
Iva Mihalj is alone in this weight class. Iva is a European juvenile gold medalist. It would be good to see her compete against Tereza Souza (GB Hungary)  in the near future.

Ok that’s all folks. I hope you liked it. Let’s see if if I was right on Sunday when the results come out!