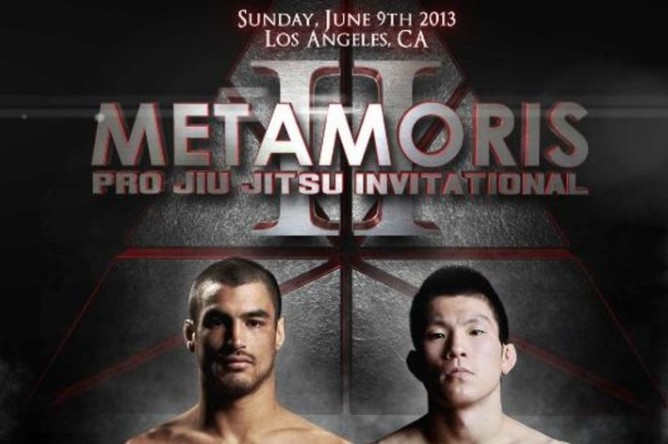 The second edition of Metamoris Pro Brazilian jiu-jitsu Invitational is set to take place this weekend (Sun., June 9, 2013), live from Pauley Pavilion in Los Angeles, Calif., featuring many of the best jiu-jitsu black belts in the world competing in a series of grappling super fights.

If you can, please support the sport and buy the pay per view here, so that we can have more of these exciting match ups in the future. The rules are simple: the matches last 20 mins. Victory is achieved either through submission or if the fight ends without a submission, three judges will decide on the winner depending on who was dominating the action.

Here are our predictions:

This is a great match up. Kron Gracie is slightly heavier than Aoki, and his style fits the submission only /no points format. He has more experience in gi, although he has fought in the past in no gi and achieved very good results in ADCC, twice losing by a small margin and even almost submitting the amazing Marcelo Garcia. He has been preparing very seriously for this fight and has the total support of his father Rickson and his camp. Aoki on the other hand is a high level Judo and BJJ fighter who has been focused on his MMA career for the past 5 years. He has very prestigious grappling accomplishments winning various grappling competitions like Rickson Budo Challenge, Japanese BJJ tournaments and is a ADCC vet. In a pure grappling war, the advantage will have to go to Kron though.

Winner: If Kron can avoid Aoki’s tricky guard and footlocks, and apply his constant pressure, he should ride the win home late in the fight, by taking Aoki’s back and securing the trademark rear naked choke. Kron Gracie by rear naked choke

The battle of generations between the experienced grappler and the new school hero. It’s also a classical guard player vs guard passer contest. Rodolfo is known for his excellent judo throws, his amazing guard passing and his underrated guard. He has dominated and submitted everybody not named Buchecha in the past 3 years. He actually beat Braulio when he was a brown belt and Braulio was a seasoned black, at the World Pro 5 years ago. Braulio has been focusing on no gi and MMA for the past few years, as Rodolfo was rising, but has recently declared that he wants to come back to the gi and challenge the new generation. With his amazing form in the Worlds last week, where he dismantled Galvao is reassuring coming into this fight.

This is a fantastic match between two very well rounded grapplers with excellent top and bottom games. Both had so so experiences in this year’s Worlds with Galvao losing to the much bigger Leo Leite in the quarter finals of the absolute, then being outclassed by Braulio in the semis of his weightclass. Lovato lost to Joao Rocha in the semis of his weight class. Lovato will be coming in at a good 6 kilos heavier than Galvao.

Winner: This is a tough one to call. I see a draw at the end of 20 mins and Galvao taking it by ref decision from being more active and also the fact that there was a weight disadvantage influencing the judges.

These two actually met in the world pro finals and Michelle won by a last minute sweep in a evenly matched fight. Nicolini has much more experience at the higher level but Mackenzie is a rising star.

Winner: This will be a war. Look for Nicolini to finish the fight by a trademark footlock late in the match.

Cyborg is a really bad match up for Brendan Schaub who has yet to show any display of great grappling in any of his MMA fights. Schaub does hold a brown belt in Gracie Jiu-Jitsu and trains at the Gracie academy. Cyborg on the other hand is very spectacular and moves like a lightweight. He also is a 2x no gi world champ and ADCC medallist.

Winner: Cyborg will put on a grappling show, outclassing Schaub and ending the fight by whatever he wants when he gets  tired of gaining dominant positions.

Victor Estima has a very dynamic game and a nasty footlock. He holds big wins in ADCC on Joao Assis for example, and is also a No Gi world champ. Torres has a complete game and came second this year in the No gi worlds. Victor will have a slight weight advantage in this fight.

Winner: Both of these guys have very attack minded styles so this is going a barn burner of a fight. Estima’s experience and size will prove too much for JT as he submits him with a rear naked choke before the 10 mins mark.