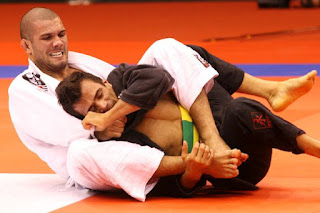 Article written by the excellent Jsho on the EFN Forum

This is the 4th World Professional Jiu Jitsu Championships and promises some great match ups. The weight categories appear to have shifted again (making 3 different sets of categories in the last 4 years…) although this is a good move since we now have more, more evenly spaced brackets rather than jumps of  9kg per bracket as per last time.
Probably still a number of competitors to be added to the list (this one is current as of 4th April) since some of the divisions look very small.

-64kg (Reigning Champion @ -65 Augusto Lopes Mendes “Tanquinho”)
Contenders: Gabriel Willcox, Laercio Fernandes, Bruno Malfacine
What might happen: Malfacine will be confident having secured his 2012 Pans title (his 4th) with a win over reigning World Champion Gui Mendes. Neither Mendes brother nor Augusto “Tanquinho” are registered currently so even with players such as Willcox and Laercio Fernandes, this title is surely Bruno’s for the taking.

-70kg (New division)
Contenders: Isaque Paiva, Raphael Dos Santos, Wellington “Megaton” Dias
What might happen: Relative unknown Paiva jumped into wider awareness with his submission victory over Bruno Frazatto at the Brazil Gramado trials event. It wasn’t so much the fact he submitted such an accomplished player as Frazatto, which would usually be noteworthy enough, rather the initial DQ for his celebrations (which saw him run off the mats to hug his teammates) which was seemingly overturned by a pleas from Frazatto himself to the referee. Great sportsmanship from Bruno in a sport not always noted for such behaviour. Perennial competitor Wellington “Megaton” is also entering. I’ll go with Paiva to take the win.

-76kg (Reigning Champion @ -74kg Leandro Lo Nascimento)
Contenders: JT Torres, Lucas Lepri, Davi Ramos, Roberto Satoshi, Leandro Lo
What might happen: The accepted notion that tournaments at Lightweight would be won by one of Lucas Lepri, Michael Langhi or Celso Vinicius was disavowed at these championships last year when the relatively unknown Leandro Lo Nascimento beat both Celsinho and Langhi to claim the Gold. He defeated Langhi again in the 2011 Brasilieros final and recently took the Pans 2012 title, besting Lucas Lepri in the final. Leandro is clearly a favourite for this tournament, but another new contender, Roberto “Satoshi” Souza has similarly made quite an impact recently, with gold at the Europeans by way of victories over Michael Langhi and JT Torres. With elite players such as Atos star Davi Ramos and JT Torres also qualified, this should be an exciting division.
I think Leandro Lo is likely to repeat his victory of last year.

-82kg (Reigning Champion @ -83kg Claudio Calasans)
Contenders: Claudio Calasans, Guto Campos, Tarsis Humphreys, Rodrigo Fajardo
What might happen: Three strong contenders in Calasans, Campos and Humphreys, tough for Tarsis who will presumably have to beat one, maybe both of them to recapture his title here.Rodrigo Fajardo, European Champion this year will also be in contention for a medal. “Gringo” hopes are carried by Kit Dale from Australia (a recent bronze medalist at the Pans) and one of Lloyd Irvin’s stars DJ Jackson (who coincidentally beat Kit in the Purple Belt final here last year).
Calasans has had a very strong set of results in the past couple of years, Tarsis on the other hand hasnt really competed much since his 2010 Mundials title. I think if he is on form and fit, he might be too much for Claudio or Guto.

-88kg (New Category)
Contenders: Andre Galvao, Rafael Lovato Jr
What might happen: [/b]Galvao pulled out of the recent Pans but will be favourite to take the title here with Lovato likely to be his opponent in the final.

-94kg (Reigning Champion @ -92kg Rodolfo Vieira)
Contenders: Roberto Alencar, Rodolfo Vieira, Antonio Carlos Jr
What might happen: Antonio Carlos Jr, recently crowned Absolute Champion at the Pans will likely face the previous owner of the title, Rodolfo Vieira in the final here. Antonio has run Rodolfo close before. Rodolfo, the only man to have held double golds at the WPJJC, Europeans, Pans and Mundials simultaneously will be looking to stamp his authority back on the competition scene.
Currently noone seems to have an answer for Rodolfo…

-100kg (New Category)
Contenders: Alexandre Souza, Alexandre Ribiero, Bernardo Faria
What might happen: [/b]Currently only 4 players listed, but (with all due respect to Braulio Estima’s student Chris Bowe), 3 very strong players all have a shot here. Xande (Ribiero) seems to be in better form of late and will no doubt be looking to avenge his loss to Faria in the 2010 Mundials Pesado final. I think Faria may haev the best shot here.

+100kg (Reigning Champion @ +92kg Lucio “Lagarto” Rodrigues)
Contenders: Roberto “Cyborg”, Marcus “Buchecha”
What might happen: No “Lagarto” this time, but a couple of clear favourites with Marcus “Buchecha” and Roberto “Cyborg” present as well as former Brasilieros champion “Big” Mick Wilson and Rodolfo Vieira’s teammate Ricardo Evangelista also in the mix. I would expect Buchecha to take the win here.