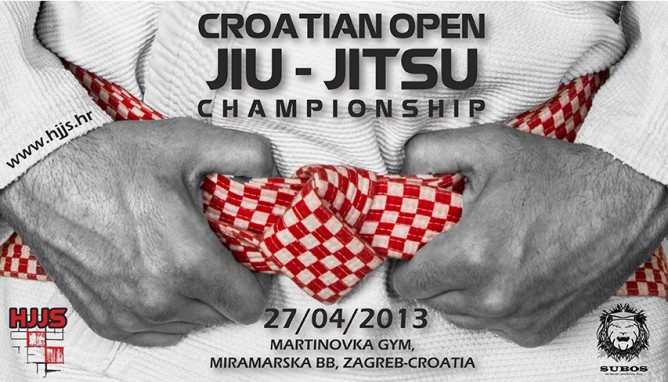 2013 Croatian Open Jiu-Jitsu Championship is one of the best tournaments in the region.

Here are the preview and predictions for the Purple and Brown/Black belt divisions:

Edo Rudnicki will face Ante Palac in a lightweight battle.

What might happen: Tabori Kristof and Velimir Rasic are the 2 most experienced BJJ players in this division. Look for them to meet in the final.Reigning Champion: Velimir Rasic (2012)

What might happen: With last year’s champion not here the final looks to set Tevz Erzen against Dejan Zivkovic.

Reigning Champion: Djordje Kesic (2012)
What might happen: With last year’s champion not participating and having been recently promoted to brown, this should be as always a exciting division. This looks set for a final between Miro Erkapic and Luka Radulovic. It will be a rematch from their match at the BJJ East European Open in Februray where Radulovic won.

What might happen: Last year’s champion is now a brown belt. This is a stacked division . Look for for a final between Vedran Budetic and David Vojnovic. Budetic won first place at Serbian Open and Vojnovic won his division at the Hungarian Open. This should be a good clash of styles between Budetic’s heavy smashing style and Vojnovic’s tricky guard.

What might happen: With Last year’s champion not here. look for Asa Nadarevic, David Vojnovic, Luka Radilovic, Vedran Budetic, Mirko Erkapic to be contenders. Asa Nadarevic will be the heavy favorite to take the absolute title.

Edson Ricardo “Alemao” will be alone in his division. look for him to shine ain the absolute.

Reigning Champion: Zvonimir Ucovic (2012)
What might happen: With last year’s champion now competing in the weight class above, This looks like a final between Mateja Valjarevic vs Neven Borcic. Both have good guards so this should be a good interesting match up.

Reigning Champion: There wasn’t this division last year.
What might happen: These three were actually in the same division at the 2012 Hungarian Open. At that tournament Ucovic came first, Huni second and Sobolic third. Ucovic won his division at the last Serbian Open, Sobolic competed at the World Pro in Abu Dhabi and Huni came 2nd at the BJJ East European Open in February. This should a interesting division.

Brown Adult Absolute:Reigning Champion: Matko Kvesic (2012)
What might happen: With last year’s champion injured, this should be a interesting division. The advantage would have to go to Damir Salina who recently competed at the 2013 Europeans and won his first fight at black belt adult. Levente Varga won gold at the same Europeans at purple master, so is also dangerous. Damir Vidakovic has been less active in competition as of late but is always a threat. The final should probably be between Damir Salina and Levente Varga.

What might happen: Look for Zvonimir Ucovic and Damir Salina  to meet in the final.