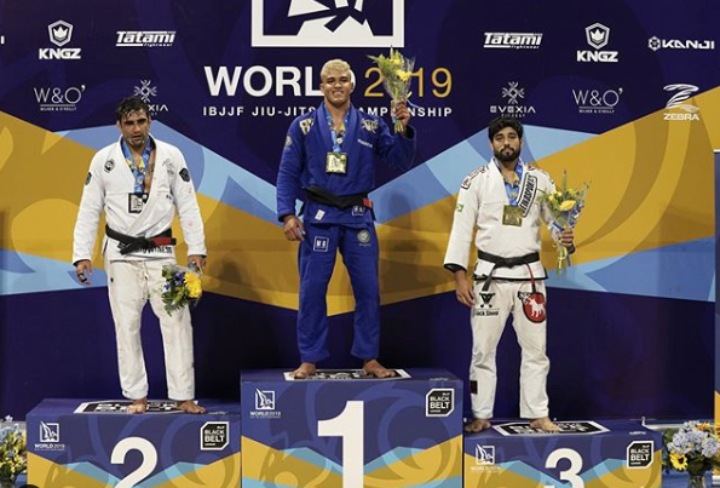 Over the past few months, rumors have been circulating that 2019 IBJJF world champion and 2019 ADCC world champion Kaynan Duarte of Team Atos had failed a PED test after the 2019 Worlds last June.

Today USADA announced the news and confirmed that Duarte would be receiving a 1 year suspension:

Kaynan Duarte, of San Diego, Calif., an athlete in the sport of Brazilian Jiu-Jitsu, has accepted a one-year suspension for an anti-doping rule violation.

Duarte, 22, tested positive for ostarine as the result of an in-competition drug test conducted at the International Brazilian Jiu-Jitsu Federation (IBJJF) World Jiu-Jitsu Championships on June 2, 2019. Although the IBJJF is not a signatory to the World Anti-Doping Code, USADA was contracted by IBJJF to conduct testing for the event and collected Duarte’s sample in accordance with the World Anti-Doping Agency International Standard for Testing and Investigations.

Ostarine is a non-Specified Substance in the class of Anabolic Agents and is prohibited at all times under the World Anti-Doping Code and the USADA Protocol for Olympic and Paralympic Movement Testing, which applied to the 2019 IBJJF World Jiu-Jitsu Championships.

Ostarine, also known as MK-2866 and Enobosarm, is a selective androgen receptor modulator (SARM) that is illegally sold worldwide as a performance-enhancing substance. Ostarine is not currently available as a prescription medication in any country, and its unauthorized use may carry serious side effects. Nonetheless, ostarine has commonly been found as a declared and undeclared ingredient in many dietary supplements. Duarte received a one-year reduction to his period of ineligibility because after a thorough review of the evidence and cooperation from Duarte, USADA determined that the trace amount of ostarine detected in his sample was consistent with exposure to ostarine via cross-contamination. Additionally, a WADA-accredited laboratory confirmed a product possessed by a person close to Duarte contained ostarine, as listed on the product label, that could have been the source of the cross-contamination.

Duarte’s one-year period of ineligibility began on June 2, 2019, the date his positive sample was collected. In addition, Duarte has been disqualified from all competitive results achieved in competitions sanctioned by the IBJJF, or any Code signatory, on and subsequent to May 30, 2019, the date the 2019 IBJJF World Jiu-Jitsu Championships started, including forfeiture of any medals, points, and prizes. IBJJF has agreed to impose the sanction.

As a result of this sanction, Duarte’s opponent in last year’s final, Leandro, now becomes the 2019 heavyweight world champion and is becomes a 7 time black belt world champion in the process.

Kaynan Duarte responded wit the following statement on his instagram:

After fully investigating my case, USADA agreed that my positive test was for trace amounts of the banned substance ostarine, and that it was not the result of intentional use. It is for that reason that USADA agreed to reduce my sanction from four years to one year. Before I was notified of my positive test, I did not even know what ostarine was. I have always taken special care to only use safe supplements; unfortunately, despite being careful, I was still exposed to trace amounts of ostarine in the months leading up to the World Championships. Even though this was an accident, I know that I am ultimately responsible for everything that goes into my body. I would like to apologize to my family, friends, coaches, sponsors and fans, and also thank them for their support during what has been a difficult time away from the sport. I continue to focus on training and staying in shape, and look forward to my return to IBJJF competition after this year’s World Championships.

Last year, news came out that the IBJJF would be contracting U.S. Anti-Doping Agency (USADA) to test athletes at the No Gi world championships held in December 2019.

This marked the first time that competitors at an IBJJF no-gi event would be subject to testing. Up to now, only champions in the Gi Pan and World championships were tested for PEDS.