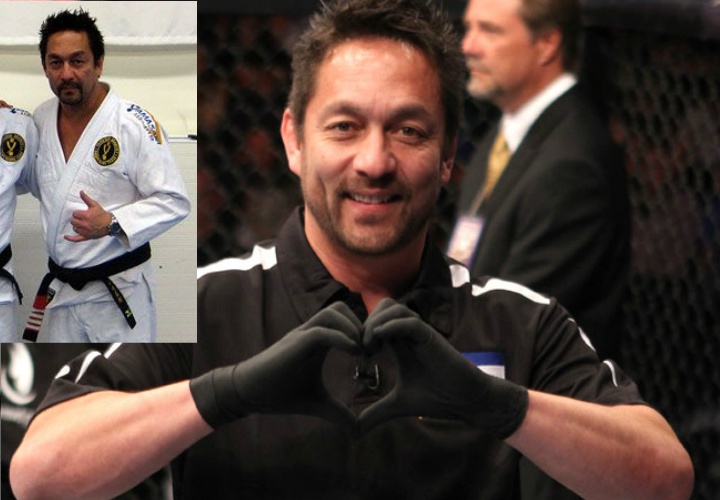 Experienced MMA referee Mario Yamasaki got a in some trouble recently when he stopped a fight as the fighter was caught in a rear naked choke and he hadn’t tapped. Kevin Lee submitted Michael Chiesa with a rear naked choke at a UFC event in June after the referee Mario Yamasaki stopped the fight before Chiesa tapped or went unconscious. The choke was fully locked and Chiesa wasn’t defending himself.

Dana White was upset with Yamasaki:

Mario Mazzagatti does it again!!! This guy is more concerned with doing this dumb ass heart bullshit then Ref’n the fight!!! Steals a great moment from Lee or let Mike fight it or tap. Nobody gives a shit that u can make a heart with ur hands like a 12 year old girl they want u to pay attention to what’s going on in the fight and do ur job.

Many UFC fighters were also revolted:

WTF did Yamasaki just do?!?! JESUS MAN!! Not saying that choke wasn’t on but BRO, LET US FIGHT!! #UFCOKC

After staying silent faced with the widespread criticism, Mario Yamasaki spoke to Brazil’s Combate. Yamasaki was sure that Chiesa was out:

“It would be easier to just let him be, but I’m a fifth degree jiu-jitsu black belt. I’m sure he went to sleep. Everyone said he didn’t tap, but there’s no tapping when you go to sleep, otherwise he would’ve moved his arm. I only have to move an athlete when I’m in doubt and there was no doubt. I saw a guy who stopped defending himself and going limp.”

“He came back very fast. I was in the moment, there’s nothing I can do. That’s where the confusion and the controversy begin. Dana, as a promoter and an excellent business man, is in his right. He promotes well. I don’t have to say anything. It’s his opinion, he thinks Chiesa didn’t go to sleep. Whoever is in there at the time knows. I don’t need to answer anything. The more I talk about this, the more it’ll grow.”

“I’m used to it. I’ve been doing this for 20 years. What hurt was my kids, nephews and nieces who are little, asking why they’re talking about me. People calling you things can get to you in the first or second day, but we’re tough. You just have to deal with it, there’s no way around it.”

Should The Ref Be Allowed To stop The Match Prior To Tapping/Going To Sleep?