Wrestling (FILA) President, Nenad Lalovic Of Serbia, On Wrestling’s Future At The Olympics: “We have to think about how to make wrestling a show.” 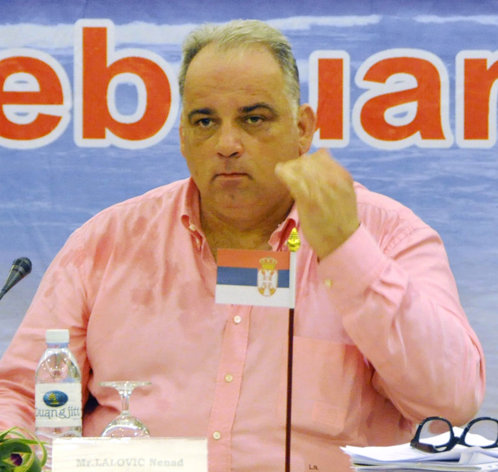 On Feb. 12, the IOC (International Olympic Committee) voted to recommend wrestling for exclusion from the program of Olympic sports from 2020, leaving an uncertain future for one of the oldest, if the oldest of all sports at the Olympic Games. FILA, which is wrestling’s federation, reacted by changing presidents shortly after the announcement, promoting one of its board members,  Nenad Lalovic of Serbia, to be the new head of the organization. The proposed changes are, among others: changing the traditional singlets to have shirtless Greco-Roman wrestlers. The stage too could change. Using the MMA world as an example, wrestling is thinking big when it comes to showmanship. Incorporating staged weigh-ins, walk-out music, lighting, visual effects and video screen replays are all being discussed. President Lalovic in a Interview with Sport’s Illustrated stated the following:

“NL: It was very friendly, diplomatic. It was just explained to me that now we are in the group that are fighting to become included in the Olympics, and we have to fight for that position. We have been given a second chance, and we will jump on it. There are plenty of chances to improve our sport and fulfill the requirements of the IOC. It was told the conditions are the same for everybody, for us and seven other sports. We have to make the new questionnaire for them.”

“NL: Even now we have different competitions from now to the Olympics. For Rio, it will be the same: four [women’s freestyle classes], seven [men’s freestyle classes] and seven [men’s Greco-Roman classes]. Then we propose six of each for 2020 and 2024. We have a requirement of equity for men and women and we have to respect that, so I hope it will be accepted. Also there will be 16 wrestling categories, not 17, 18, 19., and [we will award] one bronze medal, instead of two. The IOC has a problem with the number of athletes and number of medals and especially the number of officials. At the last Games we were there with 60 referees, while 30 is quite enough. So we have made [this proposal] to the IOC. Also, we could hold our tournament longer — instead of five or six days, maybe ten days.”

On Wrestling not having modernized over the past century, and being confusing to non wrestlers:

“NL: We also have to follow the requirements of the media. People were boxing differently a hundred years ago, and they changed that. We haven’t changed anything, we just made the rules more complicated. If you bring somebody off the street who has never seen wrestling, he should be able to see who the better wrestler is.”

On changing the wrestling singlet for long pants with no shirts:

“SI: Another suggestion is the changing of the singlet.

NL: I don’t know if it will be accepted, but I would like to make a distinction for Greco-Roman wrestlers, so with that style, the wrestlers would have long trousers but no shirt, so it can stand out. You have to make a visual difference. Sometimes spectators at the Olympics are confused. Sometimes you have mat beside mat, and yet something different is happening. The visual effect is very important.”

On the future of Wrestling:

“SI: Here we have this competition with the U.S., Russia and Iran, traditional practitioners of wrestling. Where do you see the greatest potential for growth?
NL: I think it’s Africa. In Dakar we had 60,000 people turn out for a wrestling match. For some people who count these things, they count the number of licenses sold to say how many practice the sport. But who counts the licenses in Africa, in Iran, in Georgia? They wrestle all day long. And for some African countries, they have not as much financial resources. But they have medals in athletics and they have great tradition. It can happen in wrestling.

On the cost of not being a Olympic sport:

“SI: How would FILA’s budget be affected if you were out, even for one Olympics?
NL: For one, it won’t be a catastrophe, but any more would be very problematic. Much of the money comes from the IOC. I don’t care as much about the FILA budget; I care more about every individual federation. If we are out of the Olympics, for every federation, the budget would be divided five or ten times. I made this calculation; wrestling would lose at least 100 million euros.”