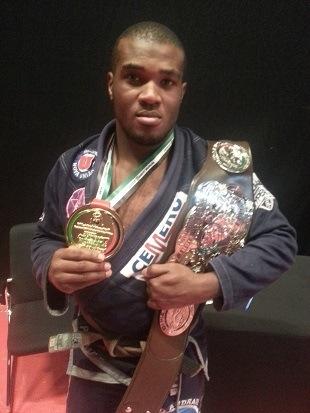 With the disqualification of Paulo Miyao andl Keenan Cornelius for lack of combativeness in the absolute brown belt final, Kaue Damasceno ended up with the belt and the title.

“When you do things right in the end, you are rewarded. I trained a lot, did everything right. I went to Pan, did not win, but I kept focused. My teachers always said that my effort would be worth it.” He said.

“In the semi I fought against Cornelius, and lost to him. I won the match for the third place though, and it was tough.”

On Friday, the brown belt was involved in another controversy. In a clash with the adopted son of Sheik Tahnoon Bin Zayed Al-Nay Nan, Kaue complained about the referee giving an “unfair” decision to the home athlete. To Kaue the World Pro needs to evolve on the issue of refereeing.

“In this fight I started pulling and then swept, but then he put me down. When I was 2-2, I swept again (4-2). With 20 secs left, the ref took my two points, giving the advantage to my opponent. I do not understand why he did this is and he didn’t tell me. But everyone knows why, right? I do not want to create controversy. This league is starting to open more doors for Jiu-Jitsu and I think that it just has to evolve. You only need to look to refereeing where they were bad. If they want to grow, to expand across the world, they need to improve. ”

Very emotional, Kaue recalled the days when he was retired from competition. And he even made a point of mentioning his girlfriend, also a Jiu-Jitsu fighter, Iris Batista, stating that he fulfilled what he promised and now will be able to realize their dreams.

“I had a job in Rio, was a security guard. Didn’t earn much. At that time I looked at the pictures of the guys I fought. I stopped for one year, I saw many who fought, who are in the top of the black belt today. I’ve fought with Joao Gabriel, JT Jackson, several renowned fighters. One day, I changed my mind and decided to return to competition. My teachers helped me. My victory here is 50% mine and 50% for my teachers. If not for them I would not be here.

With the title and the money in his pocket, the fighter will not escape a serious commitment with his girlfriend. “We are thinking about getting engaged. I found my better half, who has been with me at all times. “