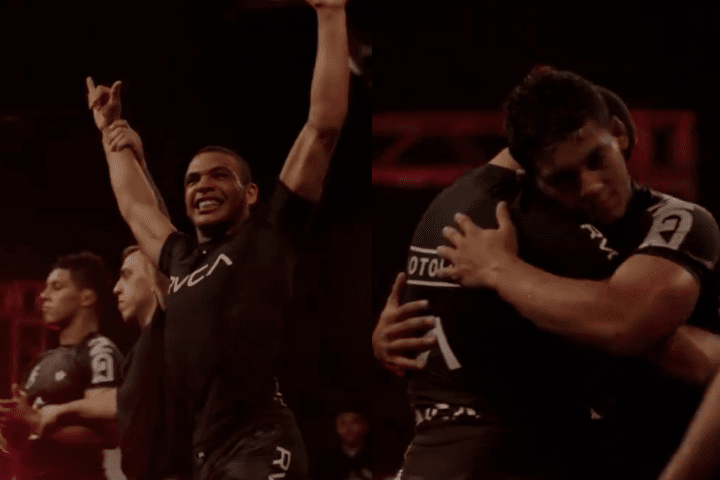 The middleweight finals match of the WNO Championships featured a competition between Tye Ruotolo and Mica Galvao. And, although the match wasn’t as high-paced as many expected it would be, Ruotolo won the title via split decision.

Case in point: the two athletes were hand-fighting from a standing position for four and a half minutes into the match. After initially being warned by the referee to get the fight down to the mats, not much had happened – and so Galvao was penalized for the lack of action. As Mica started to look for a takedown more aggressively, it was Tye who was then penalized; the match reached seven and a half minutes before any action was shown on the mats.

Then, at almost 9 minutes into the match, Galvao sat guard and attempted to go for a leg attack. However, the match was then paused because it appeared that he was kicked in the face by accident.
After the bout resumed, Ruotolo tried to pass his opponent’s guard. Galvao then got back up to his feet, after which Ruotolo tried to take him down with a Foot Sweep. Mica recovered from the attempt and sat guard again.

As Mica went for leg attacks, Tye was continuously trying to find an opening for a guard pass; which proved to be extremely difficult against his opponent’s flexible Open Guard.
Then Tye received another penalty. Mica was warned that he would receive one as well if he didn’t display more action himself. As a result, he went for a Leg Lock yet again but then stood back up to his feet. After Galvao pulled Closed Guard, Ruotolo stood up in it and opened up his opponent’s legs.

Then, Mica attempted to attack the leg yet again; repeating his process of then standing up and pulling guard once more. As Tye was trying to pass, time ran out – and he was awarded the middleweight title via split decision.